Cruz Pushes Back Against Pro-Ethanol Group in Iowa

Cruz is trying to become the first presidential nominee from either party to oppose the fuel mandate and win Iowa. 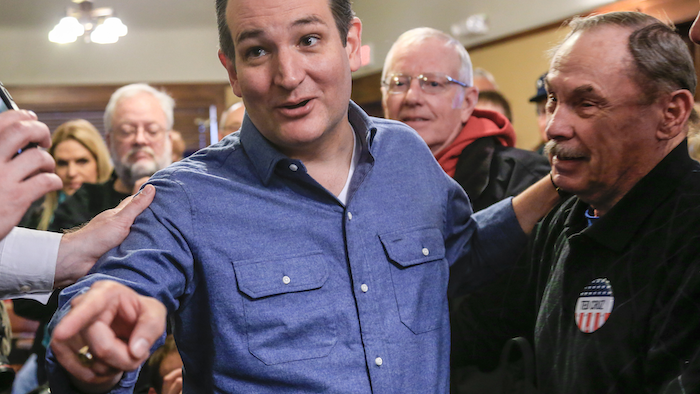 SPENCER, Iowa (AP) — Texas Sen. Ted Cruz pushed back Wednesday against a pro-ethanol group in Iowa that claims he's softened his opposition to a government biofuels requirement as the Feb. 1 caucuses near.

The Renewable Fuel Standard, passed by Congress in 2005, requires the production of a certain amount of gasoline containing renewable fuels, like corn-based ethanol. Iowa produces more ethanol than any other state, and the renewable fuel has long been a powerful economic and political issue.

But Cruz has distinguished himself from others running for president, calling for phasing out the requirement over five years as part of his plan to end all energy subsidies and mandates. He authored a Senate bill in 2014 to end it by 2020.

Cruz is trying to become the first presidential nominee from either party to oppose the fuel mandate and win Iowa. His position has made him a target of pro-ethanol forces that are spending millions to stop him.

On Tuesday, after being asked about his opposition to the fuel standard at a campaign event in Cherokee, Iowa, Cruz said he wanted the five-year phase-out to run through 2022, the same year it's scheduled to finish currently. That would also be the earliest a five-year phase-out could end if Cruz were president, given that his term would begin in 2017.

Even so, the director of a pro-ethanol group America's Renewable Future that's been following Cruz across Iowa said Cruz's calling for the phase-out to run through 2022 is a "big step forward."

"Farmers and rural communities across Iowa are going to be encouraged by Sen. Cruz's remarks," said Eric Branstad, the son of Iowa Gov. Terry Branstad and director of the group. "He is clearly listening to the people of Iowa and understands the importance of the Renewable Fuel Standard to America's economy and energy independence."

Cruz said his position hadn't changed and Branstad's group, which has been running ads against him and vowed to mobilize caucus goers, was simply attacking him again with their release, which he said came from "a bunch of lobbyists and Democrats opposing me."

"The lobbyists are trying the best they can to snooker the people of Iowa," Cruz said during his stop Tuesday in Cherokee when asked about ethanol. "I don't want Iowa dependent on Washington."

Cruz argues that all types of energy — oil, gas, coal, nuclear, solar, biofuels and ethanol — should be pursued, but without any government subsidies or mandates for any of them. He says his administration would vigorously enforce antitrust laws so ethanol's access to the marketplace couldn't be blocked. And he is calling for changing regulations enforced by the Environmental Protection Agency to open the market to fuel with higher ethanol content.

Sensing the importance of the issue, Cruz outlined his position in a column he wrote that was posted online Wednesday by Iowa's largest newspaper, The Des Moines Register.

Julie French, of Meriden, Iowa, asked Cruz where he stood on the fuel subsidy at the campaign event in Cherokee. Afterward, French said she and her husband had invested $160,000 in three ethanol and biodieselplants and were worried about losing money if the subsidy goes away before it's scheduled to end in 2022.

French said she was undecided on whom she would support for president, but a number of other issues, not just ethanol, would determine which Republican she backs.