Options include shutting down the lines or routing them through a tunnel beneath the lakebed where they now rest. 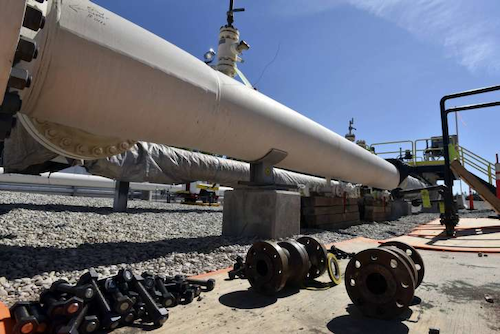 Fresh nuts, bolts and fittings are ready to be added to the east leg of the pipeline near St. Ignace, Mich., as Canadian oil transport company Enbridge prepares to test the east and west sides of the Line 5 pipeline under the Straits of Mackinac. (Dale G Young/The Detroit News via AP)

Options include shutting down the lines or routing them through a tunnel beneath the lakebed where they now rest.

The plan calls for reaching a final agreement by Aug. 15, 2018, on the pipes beneath the Straits of Mackinac, a 5-mile-long (8-kilometer-long) scenic waterway with high value to the tourist industry and Great Lakes environment. They are part of Enbridge's Line 5, which carries nearly 23 million gallons (87 million liters) of oil and liquid natural gas daily across northern Wisconsin and Michigan to refineries in Sarnia, Ontario.

The company has repeatedly insisted the underwater segment installed in 1953 is in good condition and has never leaked. However, state officials and environmental groups have expressed alarm over recent disclosures of gaps in its exterior layer of protective enamel coating and unsupported spaces beneath the pipes.

"Business as usual by Enbridge is not acceptable and we are going to ensure the highest level of environmental safety standards are implemented to protect one of Michigan's most valuable natural resources," Snyder said.

The Republican governor's administration has resisted critics' demands to order the lines decommissioned, but that option "is still on the table," said Valerie Brader, executive director of the Michigan Agency for Energy.

"Today's agreement does not represent a final decision by the state regarding Line 5, but instead provides a clear schedule on which a decision will either be reached cooperatively with Enbridge or the state will take another path," Brader said. 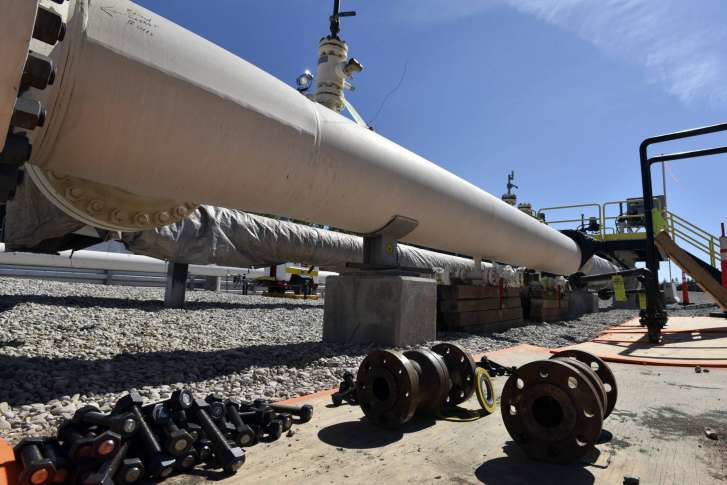 Fresh nuts, bolts and fittings are ready to be added to the east leg of the pipeline near St. Ignace, Mich., as Canadian oil transport company Enbridge prepares to test the east and west sides of the Line 5 pipeline under the Straits of Mackinac. (Dale G Young/The Detroit News via AP)

Although the federal government regulates oil pipelines, Michigan owns the lake bottom and granted an easement to the company allowing the pipeline to go there.

Enbridge officials acknowledged an erosion of public confidence in the safety of Line 5 and apologized for what they described as poor communication with the public about their inspections and studies.

"Trust is earned, and while we have a long way to go, we remain committed to doing what it takes to rebuild trust and uphold our pledge to protect the environment while safely meeting Michigan's energy needs," said Guy Jarvis, executive vice president and president for liquids pipelines.

While not ruling out a permanent shutdown, the agreement includes a series of steps intended to boost the underwater pipes' safety.

Among them is a procedure for temporarily halting the flow of oil during storms that produce sustained waves at least 8 feet (2.4 meters) high for longer than an hour, the level at which Brader said recovery of spilled oil becomes "extraordinarily hard."

Enbridge also agreed to evaluate three options by June 2018 for routing the underwater segment through a tunnel or trench, on or beneath the lakebed — either using the existing pipes or building a new one.

The company promised steps to prevent the lines from being damaged by a ship anchor, expedite monitoring of the pipelines with cameras or other devices, and speed up methods for detecting potential ruptures and responding to spills.

Additionally, Enbridge said it would replace another section of Line 5 beneath the St. Clair River where it crosses the U.S.-Canadian border with a new pipe inside a tunnel after receiving federal and state permits.

The agreement comes as Michigan agencies are taking public comments on a consultant's report they commissioned that lists six long-term possibilities for the Straits of Mackinac segment, including the tunnel alternative, which it estimated would cost about $150 million. While not endorsing an option, the report described a tunnel as more feasible than others, such as moving Line 5's oil through other existing pipeline networks.

Environmental groups said the deal appears to tip the scales in favor of a tunnel instead of halting all movement of oil through the straits, which they argued is the only foolproof way to safeguard the lakes. Other measures in the plan will do little good, they said.

"Instead of shutting down this dangerous pipeline, our state leaders continue to place an enormous amount of trust in Enbridge to operate it responsibly — even while the company continues to repeatedly break that trust," said Lisa Wozniak, executive director of the Michigan League of Conservation Voters.

State Attorney General Bill Schuette, who has called for eventually shutting down Line 5, said the agreement was "a good step forward."