Natural Gas Industry Struggling To Keep Up With Demand

There is concern about whether the industry can produce all of the gas their old and new customers need, and deliver it to them through a pipeline system that hasn't been able to keep up with the new demand. 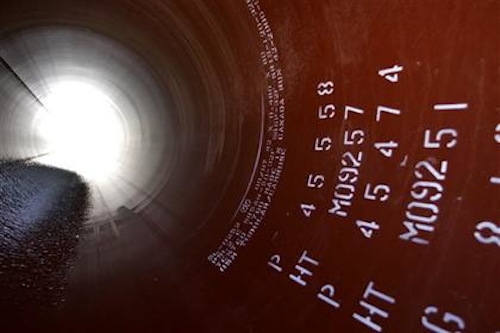 There's plenty of natural gas in the ground, everyone seems to agree. But the harsh weather this winter shows there are obstacles to producing it, and more pipelines have to be built.

The bitter temperatures boosted demand for natural gas to heat homes and businesses. But wells in some places literally froze, making it difficult for some drillers to keep gas flowing. And the high demand clogged pipelines, so even when there was enough production, the gas couldn't get where it needed to go.

Shortages cropped up, and prices in some places soared to record levels. Californians and Texans were asked to reduce their power consumption because utilities were running low on gas to run power plants. Montana State University in Billings had to cancel classes for a day because of a natural gas shortage.

"We struggled to get the supply there as quickly as we needed," said Colin Parfitt, who runs Chevron's global trading operations, at an industry conference here last week. "It's a reminder there will be volatility in our market."

The problems came as a shock because the natural gas market was thought to have escaped from the volatility of the past — drillers have discovered enormous amounts of natural gas, production is at record levels and prices had been relatively steady.

Based on that promise of ample supplies and stable prices, the nation has geared up to use more and more natural gas. Utilities are abandoning coal and nuclear power for gas, chemical companies that use natural gas as a feedstock have re-opened old plants and are planning new ones, export facilities are being built, and trucks and locomotives are even beginning to switch to natural gas.

But now there is concern about whether the natural gas industry can produce all of the gas their old and new customers need, and deliver it to them through a pipeline system that hasn't been able to keep up with the new demand.

"They can," said Bob MacKnight, a director at the research and analysis firm IHS at the firm's annual CERAWeek energy conference. "The key question is, 'Will they?'"

Drillers have suffered significant losses in recent years because of persistently low prices. In 2012, natural gas fell below $2 for the first time in a decade. Many companies curtailed gas production and switched to drilling for oil, which is more profitable because of high prices. Natural gas production rose just 1.5 percent last year, while oil production in the U.S. rose 15 percent to 7.4 million barrels a day.

Retail prices are still far below where they were in the early and middle 2000s. But the average residential price is expected to rise 12 percent this year to $11.56 per 1,000 cubic feet, according to the Energy Department. It would be the first increase in residential prices since 2008.

But drilling companies aren't yet convinced that higher natural gas prices will last. Andrew Mackenzie, CEO of BHP Billiton, the Australian mining and oil and gas giant, said in an interview at annual CERAWeek energy conference hosted by research and analysis firm IHS, that he will keep all of his 25 U.S.-based rigs probing for oil. "We have to worry about the sustainability of current (gas) prices," he said.

Citi's Yuen predicts that because increased demand and continued modest production growth, prices will rise another 15 percent at least. Toward the end of the decade, prices will average around $5.50, a level drillers would be more comfortable with.

The industry also has to build the pipelines to get the gas from the new places it is being produced, such as Western Pennsylvania, to its new customers. Pipeline constraints and other infrastructure problems helped create some of the supply problems this winter that sent prices gyrating so violently one Wall Street analyst called them "untradeable."

Between January 1 and mid-February, prices for immediate delivery at the natural gas hub that serves Boston averaged $22.53 per thousand cubic feet, about 4 times higher than the national benchmark, and a record high, according to the Energy Department. For a period during some cold snaps, New York and other East Coast markets saw prices spike as high as $120 per 1,000 cubic feet, according to Platts, an energy information provider. That's equivalent to oil at more than $700 per barrel.

Even while prices near cities were soaring over $100, the drillers just a few hours' drive away were selling gas at less than $4 because there was no room on the pipelines.

"It's a question of getting to market," said Greg Ebel, CEO of Spectra Energy, a pipeline company that moves one-fifth of the gas used in the U.S. every day. "How are we going to actually deliver the supply needed, that's a real challenge for us."

The industry is planning several terminals to export natural gas to customers in Asia and Europe, where gas remains much more expensive than in the U.S. The terminals will be built where pipeline constraints are not a problem, but the terminals approved by the Energy Department so far would increase demand by 13 percent.

Ebel and a panel of gas executives speaking here said the situation would have been worse had this frigid winter come five or ten years ago. "I think the Northeast was pretty lucky this winter," Ebel said.

Still, natural gas storage levels are lower than they've been since 2008. That could mean even higher prices are on their way, either this summer if temperatures rise or this winter if drillers don't re-fill storage caverns.

Prices might even rise high enough to get drillers interested in gas again. "If this summer starts hot you will see some interesting situations," Ebel said.