U.N. Secretary-General Ban Ki-moon on Thursday urged governments to listen to scientists "shouting from the roof tops" and accelerate talks on a global pact to fight climate change. With U.N. talks in Lima bogged down by age-old splits between rich and poor countries, Ban told The Associated... 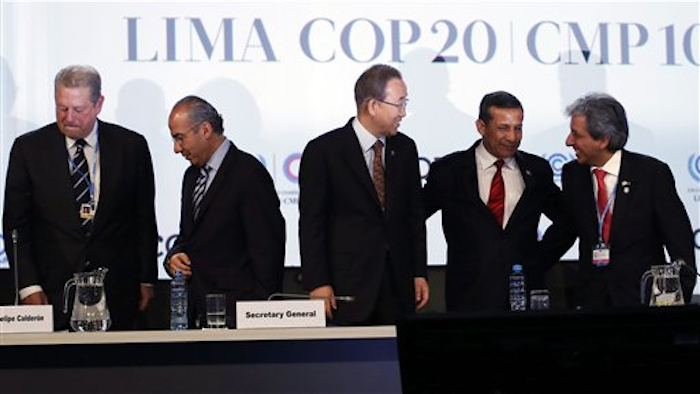 U.N. Secretary-General Ban Ki-moon on Thursday urged governments to listen to scientists "shouting from the roof tops" and accelerate talks on a global pact to fight climate change.

With U.N. talks in Lima bogged down by age-old splits between rich and poor countries, Ban told The Associated Press that countries must get down to substance and produce a draft text that can be refined into a solid agreement at a key climate summit next year in Paris.

"The time for engaging in all these procedural matters is over," Ban said.

He also called on big carbon polluters to follow the examples of China, the U.S. and the European Union and announce emissions targets for a planned deal next year in Paris. India, Russia and Japan and other major carbon emitters haven't made pledges.

Governments are supposed to submit their pledges by the end of March, though many have indicated they need more time.

In Lima negotiators are trying to define the elements that should go into next year's deal, with disputes over money halting progress. Rich countries are resisting demands to include in their pledges promises of financing to help poor countries tackle climate change.

Rich countries want the pledges to focus on actions to cut or curb the emissions of greenhouse gases — mostly from the burning of fossil fuels — blamed for global warming.

Scientific reports show climate impacts are already happening and include rising sea levels, intensifying heat waves and shifts in weather patterns causing floods in some areas and droughts in others. Ban said the message from scientists that emissions need to come down urgently is unambiguous.

"They are even shouting from the rooftops," he said. "Scientists are saying that climate change is happening much, much faster than we expect, than we realize."