Efforts to conserve a struggling species of grouse that ranges across the Western U.S. are having far-reaching effects on the region's energy industry as the Obama administration decides whether the bird needs more protections. Sales of leases on 8.1 million acres... 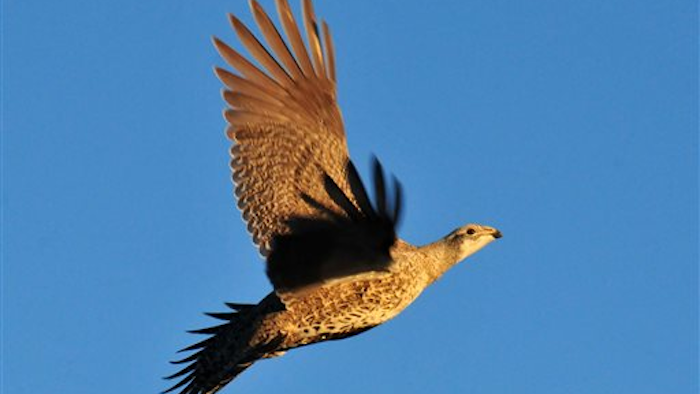 Efforts to conserve a struggling species of grouse that ranges across the Western U.S. are having far-reaching effects on the region's energy industry as the Obama administration decides whether the bird needs more protections.

Sales of leases on 8.1 million acres of federal oil and gas parcels — an area larger than Massachusetts and Rhode Island combined — are on hold because of worries that drilling could harm greater sage grouse, according to government data obtained by The Associated Press.

The U.S. Bureau of Land Management's delay on the parcels underscores just how much is at stake for an industry that finds its future inextricably intertwined with a bird once known primarily for its elaborate mating display.

The grouse's huge range, covering portions of 11 states and an area more than four times as big as New England, includes vast oil, gas and coal reserves and the best type of windy, open country for developing wind power.

"We're not real happy about it. It's not even an endangered species," said Rick Bailey, who runs an oil and gas lease brokerage, Nevada Leasing Services. He said he's had hundreds of thousands of acres of potential leases put on hold.

Those parcels are among 5 million acres the BLM has deferred in Nevada. Since 2008, millions more acres have been put on hold across Utah, Colorado, Wyoming, Montana and the Dakotas, according to data compiled by the AP from BLM records and agency offices including in the West and Plains.

By comparison, about 26.6 million federal acres were under active oil and gas leases at the end of fiscal year 2013 in the seven states with deferrals. That figure is down more than 20 percent since 2008.

While some in the industry are concerned that the BLM's deferrals are going to dampen or curtail energy development, other developers are launching their own efforts to preserve sage grouse. Whether that's enough to avoid protections remains to be seen.

Sage grouse receive frequent comparisons to the Northern spotted owl, another imperiled bird that stirred a fight over logging in the Pacific Northwest. The sage grouse is more a hapless wild chicken, ducking futilely behind fence-posts as political and economic forces bear down upon its sagebrush range.

Croplands, home development, wildfires and oil and gas drilling consumed more than half that expansive habitat over the past century. Grouse numbers are down at least 30 percent to no more than 500,000 since 1985.

In 2010, federal biologists said protections were warranted, but didn't impose them citing other priorities and a shortage of funds.

The September 2015 deadline to either offer protections or decide they're no longer needed resulted from settlements of lawsuits brought by environmentalists. Whether the sales of leases on the deferred parcels will proceed and drilling will occur could hinge on that decision.

Already the administration's timeline to craft conservation plans for the bird is slipping. Federal officials want the 11 sage-grouse states and multiple federal agencies to agree to long-term steps to protect the birds. The effort includes overhauling 99 federal land-use plans.

"It is a Rubik's Cube of conservation," said Deputy Assistant Interior Secretary Jim Lyons, referring to the vexing 3-D puzzle popular in the 1980s.

Just one of the 99 plans is complete, in a BLM field office in Wyoming, home to almost 40 percent of the birds. The BLM office for Montana and the Dakotas said it's unlikely to meet the end-of-year target to complete some key environmental studies.

Wildlife and energy development advocates expressed doubt whether the Interior Department can meet its timeline. But Kathleen Sgamma with the oil and gas advocacy group Western Energy Alliance suggested it's becoming a moot point for some in the energy industry.

"You've got an industry that just wants to put its head down and get oil. The BLM is putting in place very onerous restrictions that will be with us whether or not there's (an endangered species) listing," Sgamma said.

Federal officials contend there's plenty of drilling opportunities beyond the deferred parcels. "The BLM has approved 6,000 (permits to drill) that are ready for industry to act on," said BLM assistant director Celia Boddington.

Complicating the conservation effort is that nobody knows the approximate number of greater sage grouse. Estimates range from 100,000 to 500,000. One reason they are difficult to count is they're spread across an immense, sparsely populated territory. Also, sage grouse rarely live longer than a year or two.

A tough winter, drought, wildfires or disease can knock a local sage grouse population on its tail feathers. Or abundant rain and snow can green up sagebrush, offering fresh forbs to females as they rear their chicks amid the fragrant shrubs.

At the largest proposed wind power project in the U.S. in Saratoga, Wyoming, developers are drawing from four years of sage grouse research to decide where to put service roads and turbines.

Consultants for the 1,000-turbine Chokecherry-Sierra Madre wind farm have been using transmitters to track hundreds of sage grouse. They want to figure out the birds' patterns, including where they gather for mating rituals that could be disrupted if construction comes too close.

"Knowing what those are for the population is hugely important for us to try to minimize those impacts," said Jon Kehmeier, an ecologist contracted for the research by the Power Company of Wyoming.