Vermont's largest city has a new success to add to its list of socially conscious achievements: 100 percent of its electricity now comes from renewable sources such as wind, water, and biomass. With little fanfare, the... 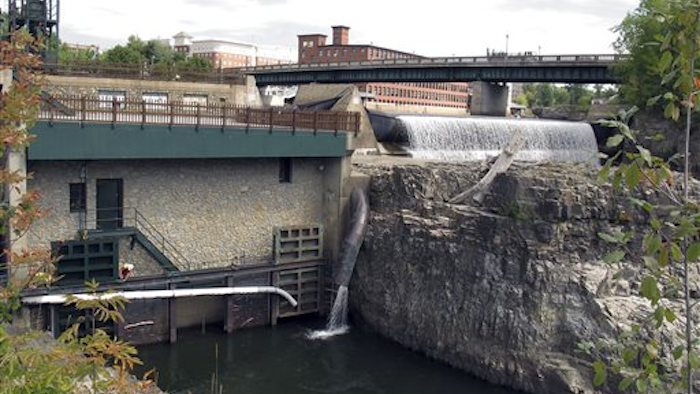 Vermont's largest city has a new success to add to its list of socially conscious achievements: 100 percent of its electricity now comes from renewable sources such as wind, water, and biomass.

With little fanfare, the Burlington Electric Department crossed the threshold this month with the purchase of the 7.4-megawatt Winooski 1 hydroelectric project on the Winooski River at the city's edge.

When it did, Burlington joined the Washington Electric Co-operative, which has about 11,000 customers across central and northern Vermont, which reached 100 percent earlier this year.

"It shows that we're able to do it, and we're able to do it cost effectively in a way that makes Vermonters really positioned well for the future," said Christopher Recchia, the commissioner of the Vermont Department of Public Service.

It's part of a broader movement that includes a statewide goal of getting 90 percent of Vermont's energy from renewable resources by 2050, including electricity, heating and transportation. Across the state, Vermonters are urging their electric utilities to provide them with renewable sources of power, and the utilities are listening, Recchia said.

It's also a growing movement across the country, as governments and businesses seek to liberate themselves from using power produced by environmentally harmful fossil fuels.

Diane Moss, the founding director of the Southern California-based Renewables 100 Policy Institute, said that she wasn't sure if any other communities as large as Burlington — a city of 42,000 — have reached 100 percent, but that many are working on it.

"It's these front-runners that are showing that it's possible," Moss said.

Nearly 1,000 businesses both large and small and many communities have also committed to 100 percent, she said.

Greensburg, Kansas, almost wiped out by a 2007 tornado, rebuilt with energy efficiency in mind. A 12.5-megawatt wind farm went online in 2009, producing electricity in excess of that consumed by the community of 850, said Administrator Ed Truelove.

"We're trying to be as sustainable a community as we can be," Truelove said.

For both Burlington and Washington Electric, reaching 100 percent was the result of a yearslong strategy to wean themselves from traditional sources of power in favor of renewables.

Utility officials in the lakefront city known for its liberal politics and extensive social service network first began discussing becoming 100 percent renewable a decade ago. Four years later they realized it could be done.

"The transition in thought from 2004 to 2008 was 'We want to do this' to 'This actually makes economic sense for us to do this,'" said Ken Nolan, the manager of power resources for Burlington Electric.

Neither utility claims that each of their customers' lights comes from renewable sources all the time. When the wind isn't blowing and the rivers are low, they will buy power from traditional sources that include electricity generated from fossil fuels.

When the resources are right, though, they get more than they can use, and the difference is sold to other utilities. Over time, they sell more than they buy.

Another caveat that, to some, minimizes the 100 percent achievement is that both Burlington and Washington Electric sell renewable energy credits for the renewable power they produce to utilities in southern New England where their value is highest. In turn, they buy less expensive credits from other sources to offset the credits they have sold.

Sandy Levine, of the Vermont office of the Conservation Law Foundation, commended Vermont utilities for seeking renewable sources of power but questioned the credit trading.

"It's like if you get a big old car you're never going to use, you let somebody rent your car, then you rent back a little smart car or a scooter or something because you don't have the need," Richards said.

Taylor Ricketts, the director of the Gund Institute for Ecological Economics, an interdisciplinary research center that works on sustainability issues at the University of Vermont, a Burlington Electric customer, said reaching 100 percent was a big achievement.

"It definitely makes me feel better here at UVM to know that every time I turn on a light switch or fire up my computer or anything else, to know that it's 100 percent renewable," he said.