A few years ago, astronauts orbiting the Earth started seeing a strange patch of lights flickering in a formerly dark corner of North Dakota. The region is going through an oil boom and the lights, which are spread over an area larger than Minneapolis, are flares burning up... 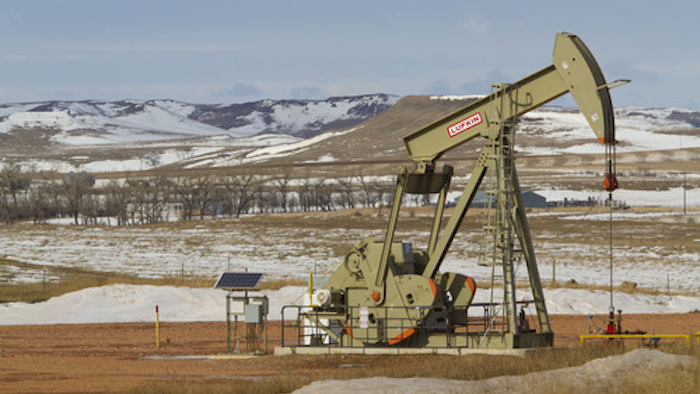 A few years ago, astronauts orbiting the Earth started seeing a strange patch of lights flickering in a formerly dark corner of North Dakota. The region is going through an oil boom and the lights, which are spread over an area larger than Minneapolis, are flares burning up natural gas from hundreds of new oil wells in the Bakken shale formation. The Wall Street Journal reported that in April alone, the state’s wells burned off 10.3 billion standard cubic feet of natural gas worth almost $50 million on the spot market.

Nobody likes to see money go up in flames. But the existing pipelines that take the gas from wellheads to processing plants are at capacity, forcing energy companies to burn off as much as 30 percent of their natural gas production.

That’s why earlier this year, Statoil, the Norwegian energy company, started working with GE and the energy transportation, operations and logistics company Ferus Natural Gas to capture natural gas coming up from oil wells, compress it, and use it as fuel for powering oil field equipment instead of more expensive diesel fuel.

Statoil’s pilot project on in the Bakken is already capturing thousands of standard cubic feet of gas per day, and the energy company now plans to expand it to as many as three systems by the end of the year.

“It’s a win-win proposition across the board,” says Russell Rankin, regional manager for Statoil, which operates hundreds of wells in the Bakken. “We’ll be able to cut flaring, reduce emissions, and capture the revenue stream.”

The natural gas comes out of the ground as bubbles diffused in oil, kind of like a carbonated drink. One barrel of oil in the Bakken contains about 1,000 standard cubic feet of gas, enough to heat a family home for more than four days.

Statoil runs the oil and gas coming out of the wells through separators that remove the gas. Since separated gas is still “wet” and full of valuable natural gas liquids like propane, butane, and natural gasoline, crews send it through other pieces of equipment like the Joule-Thomson skid that take the liquids out for sale to customers.

In the past, teams would flare the gas that was left. But the pilot Statoil installation sends this “dry gas” to a mobile compressor designed by GE, which compresses the remaining dry gas from 50 to 2,900 pounds per square inch. The highly-pressurized gas then travels inside Ferus’ tube trailers pulled by heavy duty trucks. They deliver the gas as fuel to rigs and equipment often many miles away.

GE and Ferus NGF call the system “Last Mile Fueling Solution" because it takes the gas the final distance, or the last mile, from the point of supply at the wellhead to the point of use without the need of pipes on the ground. It combines GE’s CNG in a Box technology with Ferus’s oil field logistics.

In addition to powering rigs and truck fleets, Statoil may also start using it to power electric generators and other oil field equipment. “We could eliminate about 40 to 50 percent of our diesel use with this technology,” Rankin says.

Rankin estimates that the expansion will allow Statoil to capture between 3 and 5 million standard cubic feet of gas per day by the end of the year, and reduce emissions between 120,000 and 200,000 metric tons of greenhouse gases per year.

“The ultimate goal is to reduce flaring as much as possible and capture the gas in our wells,” Rankin says. “We have been working to capture as much as gas as possible for a while now. With new regulations, there’s no other way around it. We need some solutions to capture gas now, when there is a lack of pipeline capacity. But this system can also be very useful in remote areas with no pipeline access.”

GE and Ferus NGF say that they are in discussions with other energy companies working in the Bakken formation to help them stay in compliance with new flaring regulations and ease their conversion from diesel to natural gas fuel.

Observers from space might be the first to know when Last Mile takes off. Nobody will mistake the plains of North Dakota for Las Vegas at night again.