The prospect of Texas strengthening fire safety codes or enforcing tougher standards on companies with volatile quantities of hazardous chemicals has become murky 16 months after the disaster. 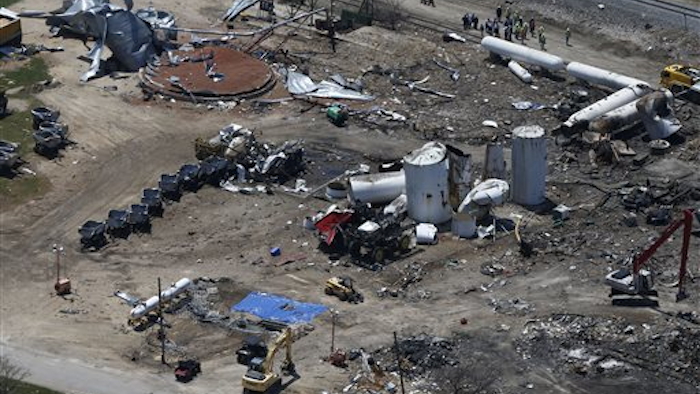 AUSTIN, Texas (AP) -- The massive fertilizer plant explosion that killed 15 people last year is unlikely to meaningfully change regulatory or safety rules in Texas until at least 2016 under the latest bill offered Tuesday by lawmakers tasked with scrutinizing the blast.

The prospect of Texas strengthening fire safety codes or enforcing tougher standards on companies with volatile quantities of hazardous chemicals has become murky 16 months after the disaster in the rural town of West. The blast killed 12 people responding to an initial fire and leveled homes and schools blocks away.

Republicans and Democrats on the House Homeland Security and Public Safety Committee continued to pledge efforts to make sure another disaster on the scale of West never happens again. But their latest draft removed proposed penalties and calls for a committee of government and industry officials to mull major changes, rather than the Legislature enacting new safety laws themselves.

Republicans and industry groups welcomed the revisions a month after slamming the first draft of the bill as overzealous.

Democrat Joe Pickett, who chairs the committee, defended the bill as still having teeth. He said the Legislature typically doesn't pass such fine-pointed laws, such as rules specifically related to facilities storing ammonium nitrate, and that putting the industry on the proposed committee won't impede any substantive proposals.

"I don't believe we're going to have anybody, either side, hijack anything," Pickett said.

Federal, state and local officials who have investigated the blast have suggested fertilizer vendors to install sprinklers, enact new training standards for volunteer firefighters, create a state fire code or allow small counties to enact their own codes.

Texas does not have a statewide fire code, and it has prohibited most small counties from enacting their own.

Texas State Fire Marshal Chris Connealy said other members of the advisory committee would include himself, the state chemist, firefighters and the Texas Farm Bureau. The group wouldn't convene until September 2015 and then pass along recommendations in 2016 to the state's insurance commissioner, who could then install new rules.

The state fire marshal's office falls under the state Department of Insurance.

But Connealy defended the new bill on Tuesday.

"I don't think it's kicking the can at all," Connealy said Tuesday of the new bill. "Certainly you want to get input from industry and all the various stakeholders that are involved with the issue so you get all the different opinions, so you make better public policy."

No one from West has spoken at the last two meetings of the House committee writing the bill, which will be filed when the Legislature reconvenes in January — and then could be rewritten all over again.

"I know that's still an expensive process for some of these fertilizer plants, and I don't want to overregulate them," he acknowledged. "That's the one thing I don't want to do."