Shell has been planning to base its fleet — including a drill rig and two tug boats — at the port's Terminal 5 for six months each year, when they're not being used in the Arctic. 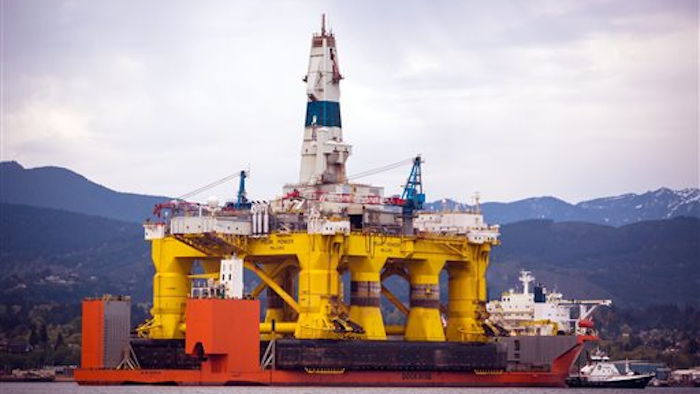 Shell has been planning to base its fleet — including a drill rig and two tug boats — at the port's Terminal 5 for six months each year, when they're not being used in the Arctic. Environmentalists have already sued over the plan, saying the port broke state law in February when it signed a two-year lease with Foss Maritime, whose client is Shell.

At a breakfast for a clean-energy group, Murray said city planners reviewed the use of Terminal 5 as a base for the drilling fleet and found that it would violate the port's land-use permit, which allows a cargo terminal on the site.

The city "has determined that the Port's proposed use is not a cargo terminal and therefore the Port must apply for a new permit," The Seattle Times quoted the mayor as saying. "I expect the Port to obtain all required city permits before any moorage or work begins at Terminal 5 on Shell's oil and drilling equipment."

Shell is considering offshore exploratory drilling again this summer in the Chukchi Sea off Alaska's northwest coast if it can get the necessary permits. The company has argued that its planned activities at the terminal — such as docking, equipment loading and crew changes — are no more environmentally risky than loading or unloading shipping containers.

"This is a dispute between the city and the port," Foss Maritime spokesman Paul Queary wrote in an email. "When we entered into our lease with the Port of Seattle, the port assured us that our project was covered by the existing permit. We're going forward with the work accordingly."

Port of Seattle spokesman Peter McGraw said the port wasn't prepared to comment because it had not received any official findings from the city.

One of the drill rigs Shell is planning to use if it can obtain appropriate permits, the 400-foot-long Polar Pioneer, arrived in Port Angeles last month, following a journey across the Pacific, on its way to Seattle. Some activists plan to protest near the port in kayaks on May 16.

Critics say welcoming the fleet risks pollutant spills in Puget Sound and that enabling oil drilling in the Artic runs counter to Seattle's environmental sensibilities. Supporters say the drilling will happen regardless of where the fleet is based and that the lease will bring hundreds of well-paying jobs to the city.