New Concept In Solar Energy Poised To Catch On Across U.S.

A new concept in renewable energy is catching fire across the country, allowing customers who might find solar panels too expensive or impractical to buy green energy anyway. Community solar gardens first took off in Colorado a few years ago, and the model — also known as... 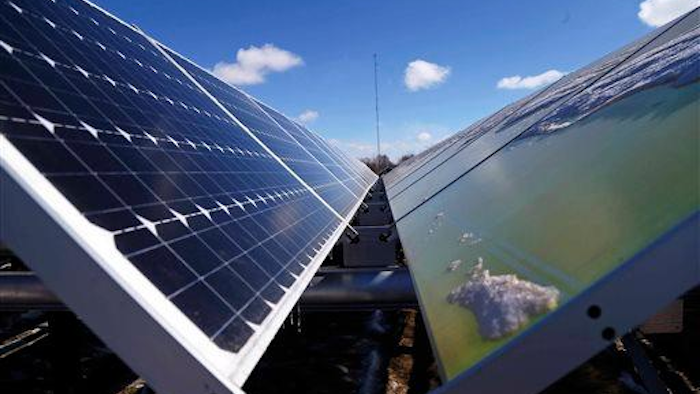 A new concept in renewable energy is catching fire across the country, allowing customers who might find solar panels too expensive or impractical to buy green energy anyway.

Community solar gardens first took off in Colorado a few years ago, and the model — also known as community or shared solar — has spread to Minnesota, California, Massachusetts and several other states. Capacity is expected to grow sharply this year, and interest is up among both residential customers who just like the idea and large companies that want to cut their carbon footprints.

The gardens feed electricity to the local power grid. Customers subscribe to that power and get credit on their utility bills, with contracts that typically lock in for 25 years and shelter against rate increases. Some developers say customer bills will drop below regular retail rates within a few years; others say the savings begin immediately.

"This is really the year that community solar becomes mainstream," said David Amster-Olszewski, CEO of Denver-based solar garden developer SunShare LLC, which runs two operations in Colorado and is developing more with Xcel Energy Inc., including in Minnesota.

Rooftop solar panels are becoming more popular among homeowners as the cost comes down, but that market is limited to only about one-fourth of U.S. residences, according to the National Renewable Energy Laboratory, an arm of the U.S. Department of Energy. Community solar opens the door to many more, including renters, customers with shaded roofs and those who can't afford solar panels.

It's friendly to big customers, too. Ecolab Inc. is the first major corporate customer to commit to Minnesota's program. The Fortune 500 sanitation technology company will get enough electricity from a project in the suburbs to provide most of the power for its St. Paul headquarters.

At least 10 states promote ways for multiple customers to share renewable energy systems, according to the advocacy group Vote Solar, and a dozen states are actively promoting community solar.

"A large number of our customers simply can't go solar on their own," Marshall said. "This is a tremendous opportunity for them to go to 100 percent solar if they want it."

In Massachusetts, Clean Energy Collective expects to complete three community solar facilities in June in Uxbridge that'll provide enough juice for 400-500 residential and commercial customers in the southern part of the state. Colorado-based developer CEC has two other facilities in Massachusetts that serve about 100-200 customers and expects to announce more projects soon, spokesman Tim Braun said.

Minnesota's Legislature passed a community solar gardens law in 2013, and solar backers were amazed when Xcel Energy got a flood of proposals soon after opening the approval process in December.

But Xcel complained to regulators that many turned out to be "utility-scale projects," saying it didn't believe that's what the Legislature had in mind. The law defines a garden as 1 megawatt or less, and Xcel said developers simply planned multiple small gardens next to each other to get around it. Xcel worried that its grid might need expensive upgrades to handle all that new electricity.

Solar developers and advocates dismissed Xcel's concerns, saying the more solar that displaces electricity from coal and gas the better.

One solar garden powering up this summer is at Bethel Evangelical Lutheran Church in Minneapolis, where roof panels will serve both the church and other subscribers. Pastor Brenda Froisland said her congregation has a progressive theology and wants to be good stewards of the Earth.