The report, provided to Exxon and the Pipeline and Hazardous Materials Safety Administration, found cracks near a seam that failed on the ruptured Pegasus Pipeline, the company said. Both Exxon and the regulatory agency declined to release the report, which was produced by Hurst Metallurgical Research Laboratory Inc.

LITTLE ROCK, Ark. (AP) -- An independent report blames manufacturing defects for the failure of an Exxon Mobil Corp. pipeline that sent 150,000 gallons of crude oil into the small town of Mayflower, the company said Wednesday.

The report, provided to Exxon and the Pipeline and Hazardous Materials Safety Administration, found cracks near a seam that failed on the ruptured Pegasus Pipeline, the company said. Both Exxon and the regulatory agency declined to release the report, which was produced by Hurst Metallurgical Research Laboratory Inc.

The company said the defects identified in the report reflect the "root cause of the failure." Exxon said it is still conducting tests to evaluate other possible factors in the March 29 spill, which forced more than 20 families from their homes. The cleanup is continuing and the pipeline remains shut down.

"Based on the metallurgical analysis, the independent laboratory concluded that the root cause of the failure can be attributed to original manufacturing defects — namely hook cracks near the seam." Exxon said in a news release. "Additional contributing factors include atypical pipe properties, such as extremely low impact toughness and elongation properties across the ... seam."

"We are still conducting supplemental testing, which will help us understand all factors associated with the pipe failure and allow for the verification of the integrity of the Pegasus Pipeline. These tests will help us determine the mitigation steps we need to take to ensure a similar incident does not occur again," the company said.

Exxon said, citing the report, that corrosion wasn't a contributing factor to the spill.

Oil from the pipeline flowed through a neighborhood and into a cove that's part of Lake Conway. The company says testing showed that oil did not extend into the main body of the lake.

Attorney General Dustin McDaniel said last month that there is no distinction between the cove and the lake. McDaniel and U.S. Attorney Christopher Thyer filed a joint lawsuit seeking $45,000 per day in penalties for the effects of the spill.

McDaniel said the spill itself was a violation of state and federal law and that it badly disrupted the lives of the people who were displaced.

However, Thyer stopped short of saying the company was negligent or willful in any misconduct. Among other things, the lawsuit accused Exxon of improperly storing liquids recovered from the site.

The company said last month that it recovered all visible, free-standing oil from the spill site but that it would take months for the cleanup to be completed.

Mayflower is about 25 miles northwest of Little Rock.

Zero-Emission Forklift: Reducing Your Carbon Footprint One Lift at a Time 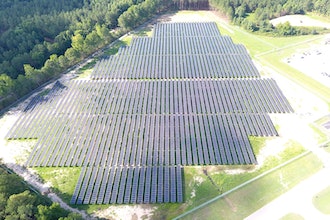 The solar installation will produce around 5.6 million kWh of power annually and more than 136 million kWh over 25 years.
October 6, 2022

The LFR technology combines the use of liquid lead as a coolant, high-temperature operation and fast neutron spectrum.
October 4, 2022

German Energy Giant to End Coal Use by 2030

The decision will accelerate the closure of some of Europe's most polluting power plants.
October 4, 2022

The Lucedale plant sources low-value wood from areas within 75 miles of the facility.
October 3, 2022

Zero-Emission Forklift: Reducing Your Carbon Footprint One Lift at a Time

There is a wide range of benefits to using zero-emission forklifts in a warehouse.
October 3, 2022

In One Tiny German Town, Nobody Worries About Energy Bills

When the Power Grid Goes Down, Could Solar & Batteries Power Your Home?

What it would take for homes and commercial buildings to ride out long power outages.
September 29, 2022

At the Oregon plant, massive lithium batteries will store up to 120 megawatt-hours of power.
September 28, 2022

The eVinci microreactor is 100% factory-built, fueled and assembled before it is shipped in a container to any location.
September 27, 2022

All parties in the maritime industry are doing all they can to make the usage of green fuels and shipping decarbonization a reality.
September 27, 2022

The company is the world's fourth-largest iron ore producer.
September 20, 2022