US Department of Energy

Washington D.C. --- Energy Secretary Steven Chu today announced that the Department of Energy has finalized a $117 million loan guarantee for Kahuku Wind Power, LLC, the owner and operator of the Kahuku Wind Power project.  The project includes the development of an innovative 30 megawatt (MW) wind power plant that will supply electricity to approximately 7,700 households per year.  According to company estimates, the project, located in Kahuku, Hawaii, will create over 200 jobs on the island of Oahu.

"This project is another example of America's leadership in the global clean energy economy," said Secretary Chu.  "Through the Recovery Act, we are supporting innovative projects that are adding to our workforce in the short term while laying the foundation for additional job creation in the long term."

"This project represents what our national energy policy is attempting to accomplish: clean energy displacing imported oil in Hawaii to generate electricity, and in the process reducing our carbon output and creating green jobs," said Senator Daniel Inouye

"There is an urgent need to establish renewable energy sources in Hawaii and the state has mapped an ambitious plan to achieve this. The federal loan guarantee announced today boosts this effort," said Congresswoman Mazie K. Hirono. "The Kahuku Wind Project is the type of project that Hawaii needs to reduce our dependence on foreign oil and keep billions of dollars in our economy."

The project is expected to be the first to meet reliability requirements for wind and solar energy set by Hawaiian Electric Company, the only electric utility operating on Oahu.  Successful integration of these new, clean energy technologies is expected to result in increased renewable energy generation and wind energy expansion in Hawaii.

Including this loan, the Department of Energy's Loan Programs Office has closed or offered conditional commitments for loan guarantees to support 13 clean energy projects. 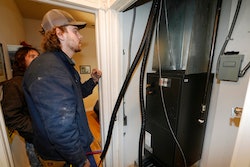 BiSAN estimates it has cut energy consumption and cost by more than 40% since making the switch.
January 25, 2023