Official says the 'the Russians were not jumping with joy' over plan that would force Moscow's state-owned Gazprom to shed its stakes in EU energy interests.

Robert Wielaard, Associated Press Writer
BRUSSELS, Belgium (AP) — The EU said Tuesday it got a cool reception when it briefed Russian officials on an energy deregulation plan that would force Moscow's state-owned Gazprom to shed its stakes in EU energy interests.
''The EU side explained what its internal market plan for energy is all about,'' an EU official said. ''The Russians were not jumping with joy,'' added the official, who asked not to be named because he is not authorized to discuss the issue publicly.
At the meeting in Moscow, EU officials explained their energy deregulation plan, which aims to boost competition and investment.
To achieve that, the European Commission wants European energy producers to shed their power grids and gas pipelines. It proposed the same for foreign energy companies wishing to enter EU gas and electricity markets, a step aimed at Gazprom.
The Russian monopoly supplies 25 percent of the EU's gas needs and has stakes in EU energy businesses in half a dozen EU nations that it may have to give up.
The first EU-Russia meeting on the energy deregulation package came at an important moment.
On Friday, Russian President Vladimir Putin will meet with senior EU officials — including European Trade Commissioner Peter Mandelson — for twice-annual summit talks at which energy is a key topic.
The EU is concerned the Russian government is using energy as a political weapon against uncooperative neighbors.
''Energy is the biggest single issue in our economic relationship,'' Mandelson said in a speech last week.
''Because of the structure of the energy sector in Russia, and the lack of a bilateral legal framework for energy trade and investment between us, there is a widespread concern that energy trade has been politicized and become less predictable,'' he said.
Large EU energy companies often control both the generation and transmission of gas and electricity. The European Commission wants them to shed their transmission networks, saying this is the only way to guarantee that rivals will be able to access pipelines or pylons to transport energy to customers.
The EU is the largest consumer of Russian energy products, taking in 63 percent of Russian oil exports and 65 percent of its gas exports. Russia is the single largest foreign supplier of oil: 27 percent of EU oil imports come from Russia, which accounts for 44 percent of the EU's gas imports.
The energy deregulation plan would require Gazprom to abandon its stake in significant energy holdings in Germany, where it owns 50 percent minus one share of gas distributor Wingas GmbH, and in Britain, where it has stakes in the Interconnector natural gas pipeline with continental Europe and Pennine Natural Gas Ltd.
Additionally, Gazprom has transmission and other energy interests in Poland, Finland, Lithuania, Latvia and Estonia and has struck alliances with energy companies in Germany, Italy and Austria.
Latest in Energy 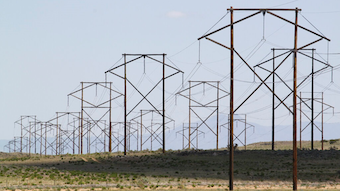