If 1 ton of woody debris can produce 50 gallons of fuel, how many gallons of fuel could 42 million acres of dead and dying forests produce? Funded by a $10 million grant from the U.S. Department of Agriculture, a consortium of five universities, joined by research labs across the Northern Rockies, is looking for ways to turn that mass of dead timber into a carbon-neutral fuel source. 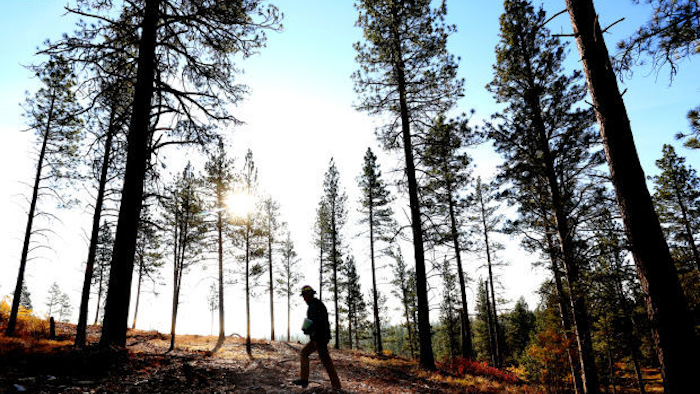 MISSOULA, Mont. (AP) — If 1 ton of woody debris can produce 50 gallons of fuel, how many gallons of fuel could 42 million acres of dead and dying forests produce?

Funded by a $10 million grant from the U.S. Department of Agriculture, a consortium of five universities, joined by research labs across the Northern Rockies, is looking for ways to turn that mass of dead timber into a carbon-neutral fuel source.

Known as the Bioenergy Alliance Network of the Rockies, the upstart group includes researchers at Montana's two flagship universities, and those at Wyoming, Idaho and Colorado State.

"This is probably one of the few projects that promises success in turning carbon waste, or organic material, into liquid fuel," said Peter Kolb, the extension project manager for BANR. "But there are a lot of challenges that need to be addressed in order to do that."

Kolb, a professor of forestry at Montana State University, is heading the project for Montana from the University of Montana's College of Forestry and Conservation, which received $1 million for the effort this month.

Cool Planet has patented technology that converts non-food biomass into gasoline. The process is described as a carbon-negative fuel cycle, and the company is looking to establish five trial refineries near potential biomass sources, which include the forests of the Northern Rockies.

"Montana is an ideal state for wood to bioenergy conversion technology," Kolb said. "We have 7.5 million acres of private lands where owners are active in trying to maintain a healthy forest, and we've got 17 million acres of federal land, where mortality rates are phenomenal and nothing is being done with that because of policy issues."

Resolving those policy issues on national forest lands stands high on the list of challenges BANR is working to resolve. While subsidies are available for taking wood off private lands for conversion to biofuels, Kolb said, those subsidies aren't available on federal lands.

But much of the dead-standing wood in Montana sits on federal lands. And without the promise of a long-term supply of biomass coming off those lands, investors aren't likely to bring new technology to the table.

"That's something that will have to get looked at very hard for this to work," Kolb said. "If you plan to make a $30 million investment, you need a long-term supply of the raw product to feed that investment, and it's nearly impossible to get a long-term commitment off federal lands right now."

The team also includes researcher Woodam Chung, a professor of forest operations at UM who is studying cost-effective ways to collect and transport forest products to a biomass refinery.

Researchers at UM are also exploring management practices - how much biomass to remove and how much to leave on site for ecological purposes. Others have been assigned to find ways of ensuring any biofuel production remains carbon neutral.

"We're looking at the logistical feasibility of locating refineries near biomass that's not being utilized, or is being poorly utilized," Kolb said. "All of these states have millions and millions of acres of beetle-killed lodgepole and ponderosa pine that doesn't have a terrific market value."

In Montana, that also includes logging debris - slash that gets burned on site. Kolb called it a low-value product and said there aren't many markets for dead-standing trees and slash.

But the recovery rates reported by Cool Planet Energy Systems are promising, standing at roughly 50 gallons of fuel per 1 ton of dry wood. To put that into perspective, Kolb said, a logging truck carries around 20 tons of wood, or the equivalent of 1,000 gallons of fuel once converted.

"It's more complicated than saying there's a bunch of dead trees," Kolb said. "There's logistics and economics that must be dealt with. The transport of low-density biomass makes it economically unfeasible right now. The petroleum you use offsets the carbon neutrality."

Using remote sensing technology, MSU is already looking to identify areas of dense beetle-kill, or forests at high risk of dying. Accessing those sources before they decay - and planning refineries in close proximity - could reduce the cost of transportation and keep the effort carbon neutral.

But for the technology to pan out, Kolb said, the end product must also remain affordable to consumers. If biofuels can't compete in the marketplace alongside fossil fuels, he said, the model - no matter how renewable or green it is - has little chance of success.

"When you look at wood or switch grass, the density of energy there is much less than fossil fuels," Kolb said. "You've got to haul wood from difficult places, like mountains, so you have less dollars per volume of energy and it's more expensive, so that's another one of the challenges we're up against."

Others are watching the progress, including Rep. Pat Connell, R-Hamilton, who is serving as a project adviser.

Connell said similar efforts are taking place in the Pacific Northwest, where the Northwest Advanced Renewables Alliance, or NARA, is looking to use woody biomass as an alternative to petroleum-based fuels and chemicals.

Based out of Washington State University, NARA aims to develop a new aviation fuel industry using wood and wood waste from across the Northwest, and to grow new wood-based energy crops.

BANR has similar goals, but is currently three years behind NARA in its research.

"What they're (BANR) looking at is trying to deal with the expansion of all this dead standing wood," said Connell. "They're going to try and evaluate the likelihood of being able to produce high-octane fuel from dead-standing wood."

Kolb would like to see Cool Planet build production plants in Montana. He believes the state holds several advantages over its neighbors - advantages that include an existing logging infrastructure and the state's abundance of dead-standing wood.

Potential sites could include the shuttered Smurfit-Stone Container Corp. site in Frenchtown, and the community of Seeley Lake, which has a functional logging mill and sits close to the Blackfoot Challenge.

"As Texans struggled to survive this winter storm, Griddy made the suffering even worse as it debited outrageous amounts each day."
Mar 1st, 2021
Follow Us
Most Recent