The drug’s patent protection had expired, but the company used what’s known as a “closed distribution system” to illegally box out competition. 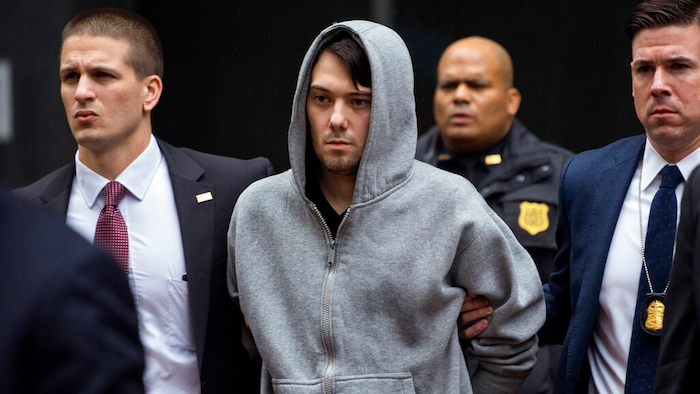 In this Dec. 17, 2015, file photo, Martin Shkreli, center, the former hedge fund manager under fire for buying a pharmaceutical company and ratcheting up the price of a life-saving drug, is escorted by law enforcement agents in New York after being taken into custody following a securities probe. State and federal authorities sued the imprisoned drug entrepreneur Monday, Jan. 27, 2020, over business tactics that helped make him the bad-boy face of profiteering in the pharmaceuticals industry, seeking to bar the so-called "Pharma Bro" from the industry for life.
AP Photo/Craig Ruttle, File

NEW YORK (AP) — State and federal authorities sued imprisoned entrepreneur Martin Shkreli on Monday over tactics that shielded a profitable drug from competition after a price hike made the so-called “Pharma Bro” infamous.

Shkreli was scorned as the bad-boy face of pharmaceuticals profiteering after he engineered a roughly 4,000% increase in the price of a decades-old medication for a sometimes life-threatening parasitic infection.

Monday’s lawsuit, filed by the New York attorney general’s office and the Federal Trade Commission, centers on subsequent actions by Shkreli and his former company.

They “held this critical drug hostage from patients and competitors as they illegally sought to maintain their monopoly,” Attorney General Letitia James said in a statement.

At least four potential competitors have so far been kept from making cheaper generic versions of the medication, the suit says.

Lawyer Benjamin Brafman said Shkreli "looks forward to defeating this baseless and unprecedented attempt by the FTC to sue an individual for monopolizing a market.”

Shkreli, 36, is serving a seven-year prison sentence for a securities-fraud conviction related to hedge funds he ran before getting into the pharmaceuticals industry.

Shkreli was CEO of Turing Pharmaceuticals -- later called Vyera Pharmaceuticals LLC and Phoenixus AG -- in 2015, when it acquired the rights to a drug called Daraprim. It is used to treat toxoplasmosis, an infection that can be deadly for people with HIV or other immune-system problems and can cause serious problems for children born to women infected while pregnant. Hospitalized patients typically take the drug daily for several weeks, and sometimes for months or even years, according to the lawsuit.

“Should be a very handsome investment for all of us," Shkreli put it in an email to a contact at the time.

The increase left some patients facing co-pays as high as $16,000 and sparked an outcry that fueled congressional hearings.

Then the company "kept the price of Daraprim astronomically high by illegally boxing out the competition,” FTC official Gail Levine said in a statement Monday.

The drug’s patent protection had expired, but the company used what’s known as a “closed distribution system” to restrict who could buy it -- meaning that companies interested in making a generic version of Daraprim couldn’t get enough pills to do required testing, according to the lawsuit. Many passages are redacted; the AG's office explained that its investigation may have involved competitive corporate information.

The drug had previously been available from various wholesalers and distributors, but it was moved to closed distribution a few months before Turing bought the rights to it.

The lawsuit also accuses the company of maneuvering to cut off potential rivals’ access to suppliers of a key ingredient for the medication and to data they would want to evaluate the drug’s market potential.

The “elaborate scheme to prevent generic competition” has likely cost consumers and other drug buyers tens of millions of dollars, the suit says.

To date, there is no generic version of Daraprim on the U.S. market.

The suit also names the company's current chairman, Kevin Mulleady. Messages were left at a possible phone number for him and sent to an email address possibly associated with him.

The suit seeks unspecified financial relief and penalties, plus an order barring Shkreli and Mulleady from ever owning or working for any pharmaceutical company.

“We won’t allow ‘Pharma Bros’ to manipulate the market and line their pockets at the expense of vulnerable patients and the health care system," said James, a Democrat.

Shkreli raised eyebrows with his behavior both in business and elsewhere. He bought a one-of-a-kind, unreleased Wu-Tang Clan album for $2 million, called members of Congress “imbeciles,” taunted prosecutors in the securities-fraud case against him, got kicked off of Twitter for harassing a female journalist and spent countless hours livestreaming himself from his apartment.

While awaiting sentencing on his 2017 conviction, he offered his online followers a $5,000 bounty for a lock of former Democratic presidential nominee and Secretary of State Hillary Clinton's hair. His lawyers said it was a joke, but a judge revoked Shkreli's bail and jailed him.

At his 2018 sentencing, Shkreli choked up, admitted making many mistakes and said he'd evolved.