The blasts detonated far from the bustling megacities of Asia, but the attack this week on two tankers in the strategic Strait of Hormuz hits at the heart of this region's oil-import-dependent economies. 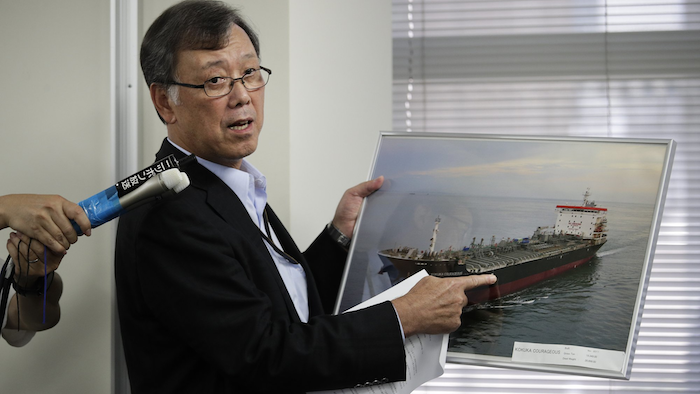 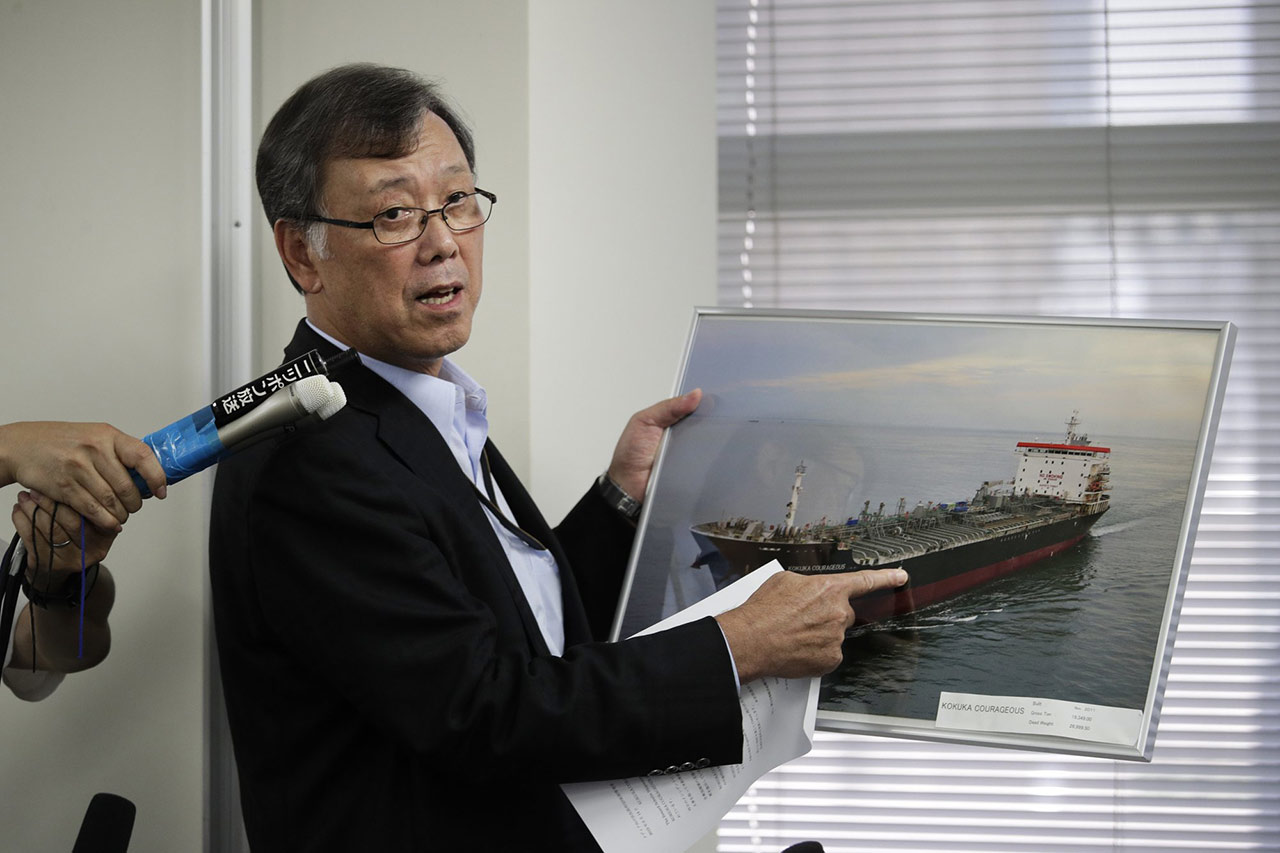 The blasts detonated far from the bustling megacities of Asia, but the attack this week on two tankers in the strategic Strait of Hormuz hits at the heart of this region's oil-import-dependent economies.

While the violence only directly jolted two countries in the region—one of the targeted ships was operated by a Tokyo-based company; a nearby South Korean-operated vessel helped rescue sailors—it will unnerve major economies throughout Asia.

Officials, analysts and media commentators on Friday hammered home the importance of the Strait of Hormuz for Asia, calling it a crucial lifeline, and there was deep interest in for more details about the still sketchy attack and in what the United States and Iran would do in the aftermath.

In the end, whether Asia shrugs it off, as some analysts predict, or its economies shudder as a result, the attack highlights the widespread worries here over an extreme reliance on a single strip of water for the oil that fuels much of the region's shared progress.

Here is a look at how Asia is handling rising tensions in a faraway but economically crucial area, compiled by AP reporters from around the world:

The oil, of course.

Japan, South Korea and China don't have enough of it; the Middle East does, and much of it flows through the narrow Strait of Hormuz.

This could make Asia vulnerable to supply disruptions from U.S.-Iran tensions or violence in the strait.

The attack comes months after Iran threatened to shut down the strait to retaliate against U.S. economic sanctions, which tightened in April when the Trump administration decided to end sanctions exemptions for the five biggest importers of Iranian oil, which included China and U.S. allies South Korea and Japan.

Japan is the world's fourth-largest consumer of oil—after the United States, China and India—and relies on the Middle East for 80 percent of its crude oil supply. The 2011 Fukushima nuclear disaster led to a dramatic reduction in nuclear power generation and increased imports of natural gas, crude oil, fuel oil and coal.

In an effort to comply with Washington, Japan says it no longer imports oil from Iran. Officials also say Japanese oil companies are abiding by the embargo because they don't want to be sanctioned. But Japan still gets oil from other Middle East nations using the Strait of Hormuz for transport.

South Korea, the world's fifth largest importer of crude oil, also depends on the Middle East for the vast majority of its supplies.

Last month, South Korea halted its Iranian oil imports as its waivers from U.S. sanctions on Teheran expired, and it has reportedly tried to increase oil imports from other countries like Qatar and the United States.

China, the world's largest importer of Iranian oil, "understands its growth model is vulnerable to a lack of energy sovereignty," according to market analyst Kyle Rodda of IG, an online trading provider, and has been working over the last several years to diversify its suppliers. That includes looking to Southeast Asia and, increasingly, some oil-producing nations in Africa. 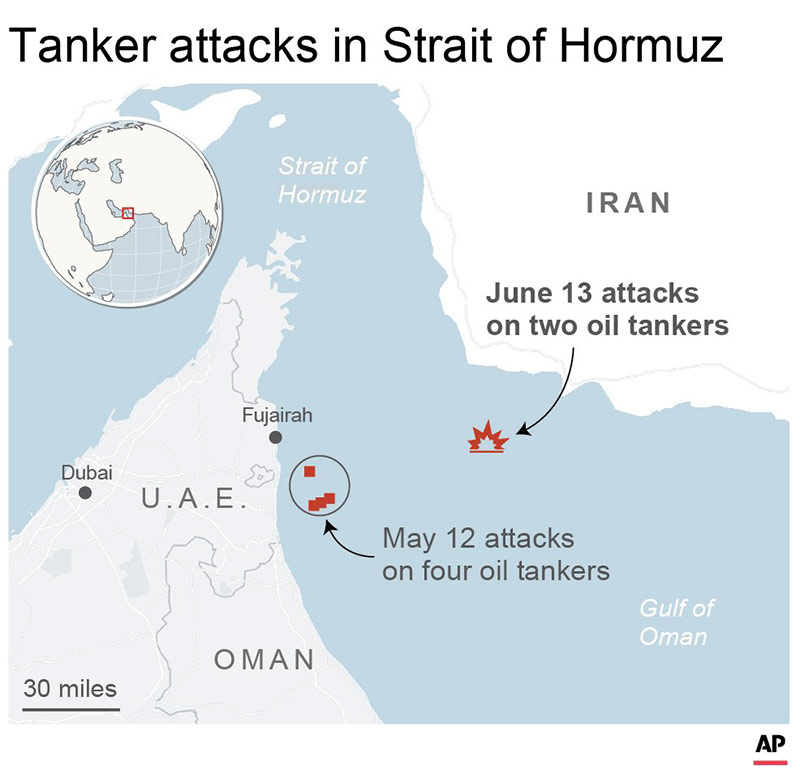 THE GEOGRAPHY AND THE POLITICS

Asia and the Middle East are linked by a flow of oil, much of it coming by sea and dependent on the Strait of Hormuz, which is the passage between the Persian Gulf and the Gulf of Oman.

In April, Iran threatened to close the strait. Iran also appears poised to break a 2015 nuclear deal with world powers, an accord that U.S. President Donald Trump withdrew from last year. The deal saw Tehran agree to limit its enrichment of uranium in exchange for the lifting of crippling sanctions.

For both Japan and South Korea, there is extreme political unease to go along with the economic worries stirred by the violence in the strait.

Both nations want to nurture their relationship with Washington, a major trading partner and military protector. But they also need to keep their economies humming, which requires an easing of tension between Washington and Tehran.

Japan's conservative prime minister, Shinzo Abe, was in Tehran, looking to do just that, when the attack happened.

His limitations in settling the simmering animosity, however, were highlighted by both the timing of the attack and a comment by Iranian Supreme Leader Ayatollah Ali Khamenei, who told Abe that he had nothing to say to Trump.

In Japan, the world's third largest economy, the tanker attack was front-page news.

Although the Japanese economy and industry minister has said there will be no immediate effect on the stable energy supply, the Tokyo Shimbun noted "a possibility that Japanese people's lives will be affected."

South Korea, worried about Middle East instability, has worked to diversify its crude sources since the energy crises of the 1970s and 1980s.

Analysts said that it's highly unlikely that Iran would follow through on its threat to close the strait. That's because a closure could also disrupt Iran's own exports to China, which has been working with Russia to build pipelines and other infrastructure that would transport oil and gas into China.

For Japan, the attack in the Strait of Hormuz does not represent an imminent threat to Tokyo's oil supply, said Paul Sheldon, chief geopolitical adviser at S&P Global Platts Analytics.

"Our sense is that it's not a crisis yet," he said of the tensions.

Seoul, meanwhile, will likely be able to withstand a modest jump in oil prices unless there's a full-blown military confrontation, Seo Sang-young, an analyst from Seoul-based Kiwoom Securities, said.

"The rise in crude prices could hurt areas like the airlines, chemicals and shipping, but it could also actually benefit some businesses, such as energy companies (including refineries) that produce and export fuel products like gasoline," said Seo, pointing to the diversity of South Korea's industrial lineup. South Korea's shipbuilding industry could also benefit as the rise in oil prices could further boost the growing demand for liquefied natural gas, or LNG, which means more orders for giant tankers that transport such gas.