Three scientists won the Nobel Prize in chemistry Wednesday for using a sped-up version of evolution to create new proteins that have led to a best-selling drug and other products. 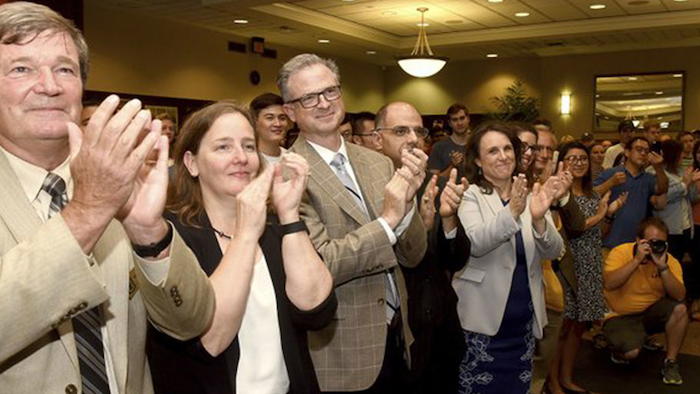 Three scientists won the Nobel Prize in chemistry Wednesday for using a sped-up version of evolution to create new proteins that have led to a best-selling drug and other products.

The Royal Swedish Academy of Science said their work has led to the development of medications, biofuels and a reduced environmental impact from some industrial processes.

Frances Arnold of the California Institute of Technology in Pasadena was awarded half of the 9-million-kronor ($1.01 million) prize, while the other half was shared by George Smith of the University of Missouri and Gregory Winter of the MRC molecular biology lab in Cambridge, England.

Arnold is only the fifth woman to win a chemistry Nobel since the prizes began in 1901.

The winners "have taken control of evolution and used it for purposes that bring the greatest benefit to humankind," the Nobel committee said.

In nature, evolution proceeds slowly as random genetic mutations generate variety in organisms and proteins, and those versions that work best in their environment persist for future generations. The research honored Wednesday mimicked that process by inducing mutations in proteins and selecting those that best met the goals of the research.

Smith, 77, and Winter, 67, worked with viruses called phages that infect bacteria. Smith showed in 1985 that inserting DNA into these viruses would make them display proteins linked to that DNA on their surfaces. It was a way to find an unknown gene for a known protein. 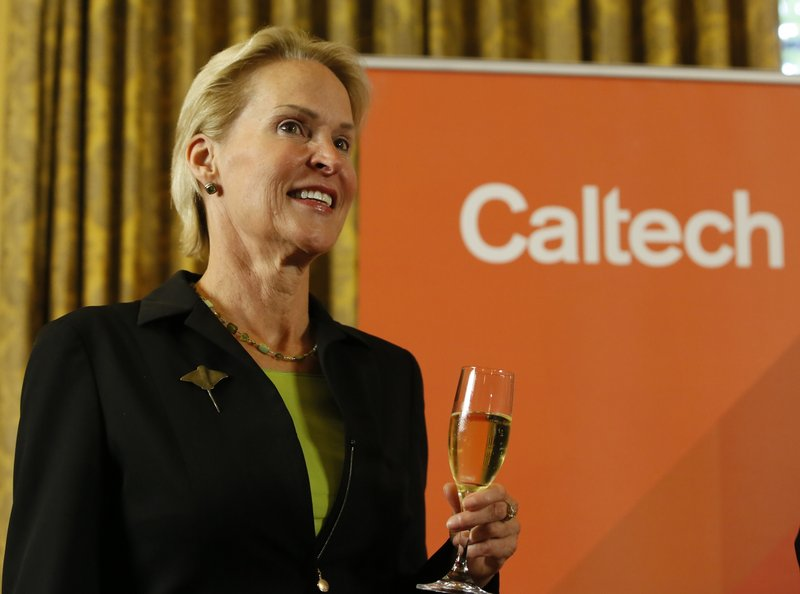 Winter adapted the approach to create useful antibodies, proteins that target and grab onto disease-related targets. Winter introduced mutations to make antibodies progressively better at binding to their targets. In 1994, for example, he developed antibodies that grab onto cancer cells.

The first pharmaceutical based on Winter's work, AbbVie's adalimumab, was approved for sale in 2002. It's used to treat immune-system disorders, including rheumatoid arthritis, psoriasis and inflammatory bowel diseases, the academy said.

Sold as Humira in the U.S. and under other brand names elsewhere, it brought AbbVie $18.4 billion in revenue last year, in part because of its price: about $5,000 a month without insurance coverage in the U.S.

Other antibodies produced by this approach fight cancer, neutralize the anthrax toxin and slow down lupus, the Swedish academy said.

Dr. Wayne Marasco of the Dana-Farber Cancer Institute in Boston said the lab technique developed by Smith and Winter was "revolutionary ... and it's used today, every day."

Arnold, 62, was seeking ways to make improved enzymes, which are proteins that encourage chemical reactions to occur. In 1993, she showed the power of "directed evolution" for doing that.

First she created random mutations in DNA that lets cells produce an enzyme. Then she slipped these mutated genes into bacteria, which pumped out thousands of different variants of the enzyme.

One variant did a particularly good job at a certain task, so she made a new round of mutations in this variant. That produced another variant that worked better. When she made mutant versions of that variant, she got an even better version. It contained a combination of 10 mutations that nobody could have predicted would work so well, the Swedish academy said.

Techniques for directed evolution have improved since then and Arnold has been at the leading edge, the academy said. Her tailored enzymes have become important for making medications and other valuable substances like renewable fuels. 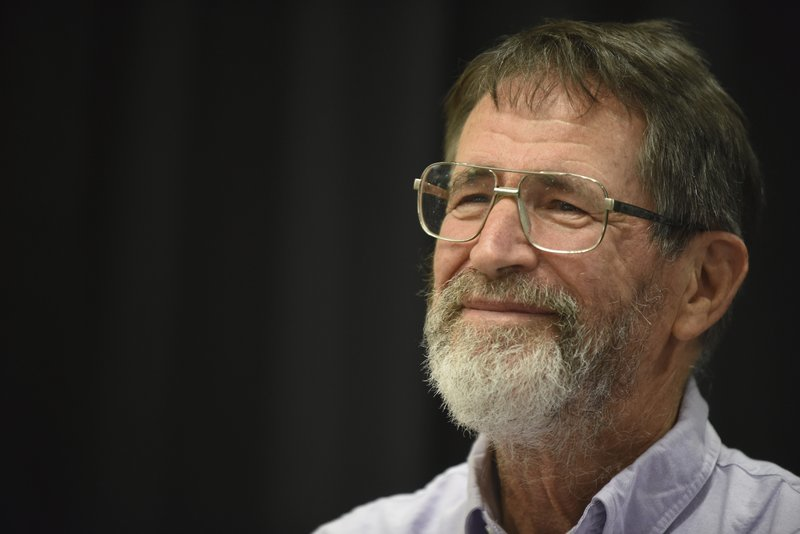 Arnold, reached by telephone at an airport in Dallas, told the AP: "I predict that we will see many more Nobel chemistry prizes for women."

She learned she had won when she was "unceremoniously woken up" at 4 a.m. in her Texas hotel room.

"The phone rang, and I was certain it was one of my kids or some emergency, but it wasn't. First I was stunned, like somebody hit me over the head with something and then I started to wake up," she said.

Arnold flew back to California for a news conference at Caltech, which she called a "jewel of an institution" where she was always "pushed to do her best and do things other people couldn't do."

In a short speech, she gave credit to her "inspiring" research team.

"The Nobel Prize goes to me but it's really a team of brilliant people who love what they do," she said.

Smith also credited others for the work that led to his breakthrough, telling a news conference at the University of Missouri that he was simply a part of a "huge web" of science.

"Very few research breakthroughs are novel. Virtually all of them build on what went on before. It's happenstance. That was certainly the case with my work," he told the AP.

Of the pre-dawn phone call from Stockholm informing him of his win, Smith said: "It's a standard joke that someone with a Swedish accent calls and says 'You won!' But there was so much static on the line, I knew it wasn't any of my friends."

Winter said an encounter with a cancer patient early in his career made him realize the importance of his work.

The woman was receiving his then-experimental antibody treatment. Even though Winter didn't know whether it would work, the patient was grateful for whatever extra time the treatment would give her to spend with her husband. 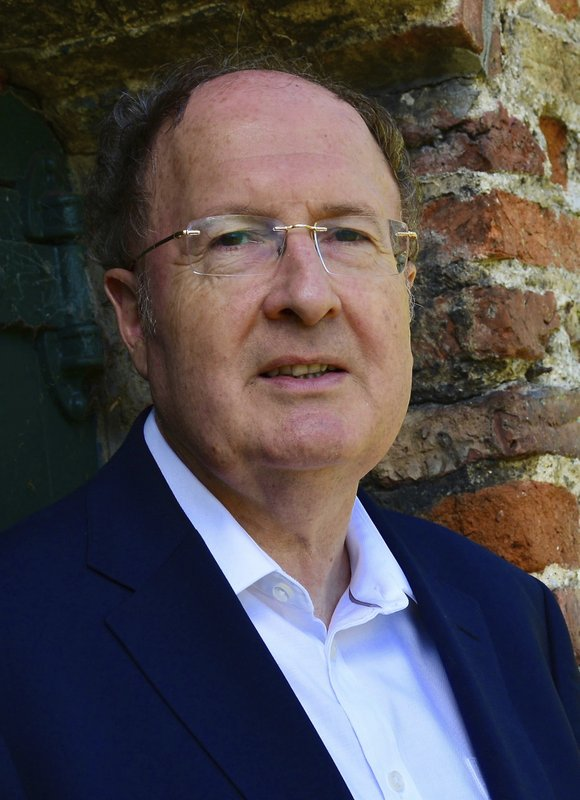 Winter says he realized afterward there was a "moral imperative" to ensure "what was produced could be used for public benefit."

In other Nobel prizes this year, the medicine prize went Monday to James Allison of the University of Texas M.D. Anderson Cancer Center and Tasuku Honjo of Kyoto University, who developed an approach for unleashing the immune system on cancers, helping doctors fight many advanced-stage cancer tumors.

Scientists from the United States, Canada and France shared the physics prize Tuesday for revolutionizing the use of lasers in research.

The winner of the Nobel Peace Prize is to be announced Friday and the Nobel Memorial Prize in Economic Sciences will be revealed on Monday.

No Nobel literature prize will be awarded this year due to a sex abuse scandal at the Swedish Academy, which choses the winner. The academy plans to announce both the 2018 and the 2019 winner next year—although the head of the Nobel Foundation has said the body must fix its tarnished reputation first.

The man at the center of the Swedish Academy scandal, Jean-Claude Arnault, was sentenced Monday to two years in prison for rape.