As the nation plans new defenses against climate change, one project stands out: an ambitious proposal to build a nearly 60-mile "spine" of concrete seawalls, earthen barriers, floating gates, and steel levees on the Texas Gulf Coast. 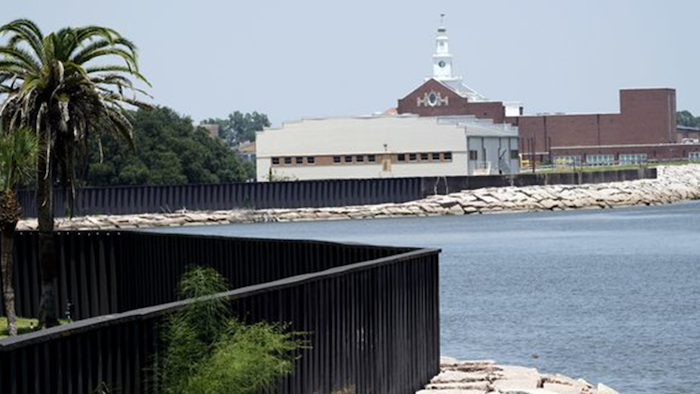 As the nation plans new defenses against the more powerful storms and higher tides expected from climate change, one project stands out: an ambitious proposal to build a nearly 60-mile "spine" of concrete seawalls, earthen barriers, floating gates, and steel levees on the Texas Gulf Coast.

Like other oceanfront projects, this one would protect homes, delicate ecosystems, and vital infrastructure, but it also has another priority—to shield some of the crown jewels of the petroleum industry, which is blamed for contributing to global warming and now wants the federal government to build safeguards against the consequences of it.

The plan is focused on a stretch of coastline that runs from the Louisiana border to industrial enclaves south of Houston that are home to one of the world's largest concentrations of petrochemical facilities, including most of Texas' 30 refineries, which represent 30 percent of the nation's refining capacity.

Texas is seeking at least $12 billion for the full coastal spine, with nearly all of it coming from public funds. Last month, the government fast-tracked an initial $3.9 billion for three separate, smaller storm barrier projects that would specifically protect oil facilities.

That followed Hurricane Harvey, which roared ashore last Aug. 25 and swamped Houston and parts of the coast, temporarily knocking out a quarter of the area's oil refining capacity and causing average gasoline prices to jump 28 cents a gallon nationwide. Many Republicans argue that the Texas oil projects belong at the top of Washington's spending list.

"Our overall economy, not only in Texas but in the entire country, is so much at risk from a high storm surge," said Matt Sebesta, a Republican who as Brazoria County judge oversees a swath of Gulf Coast.

But the idea of taxpayers around the country paying to protect refineries worth billions, and in a state where top politicians dispute climate change's validity, doesn't sit well with some.

"The oil and gas industry is getting a free ride," said Brandt Mannchen, a member of the Sierra Club's executive committee in Houston. "You don't hear the industry making a peep about paying for any of this and why should they? There's all this push like, 'Please Senator Cornyn, Please Senator Cruz, we need money for this and that.'" 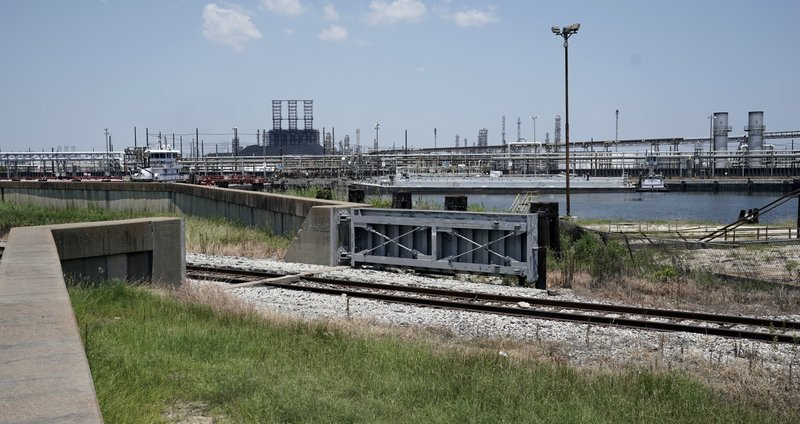 A flood gate and seawall that will be increased is shown near a refinery Thursday, July 26, 2018, in Port Arthur, Texas. The oil industry wants the government to help protect some of its facilities on the Texas Gulf Coast against the effects of global warming. One proposal involves building a nearly 60-mile “spine” of flood barriers to shield refineries and chemical plants. Many Republicans argue that such projects should be a national priority. But others question whether taxpayers should have to protect refineries in a state where top politicians still dispute whether climate change is real. (AP Photo/David J. Phillip)

Federal, state, and local money is also bolstering defenses elsewhere, including on New York's Staten Island, around Atlantic City, New Jersey, and in other communities hammered by Superstorm Sandy in 2012.

Construction in Texas could begin in several months on the three sections of storm barrier. While plans are still being finalized, some dirt levees will be raised to about 17 feet high, and 6 miles of 19-foot-tall floodwalls would be built or strengthened around Port Arthur, a Texas-Louisiana border locale of pungent chemical smells and towering knots of steel pipes.

The town of 55,000 includes the Saudi-controlled Motiva oil refinery, the nation's largest, as well as refineries owned by oil giants Valero Energy Corp. and Total S.A. There are also almost a dozen petrochemical facilities.

"You're looking at a lot of people, a lot of homes, but really a lot of industry," said Steve Sherrill, an Army Corps of Engineers resident engineer in Port Arthur, as he peered over a Gulf tributary lined with chunks of granite and metal gates, much of which is set to be reinforced.

The second barrier project features around 25 miles of new levees and seawalls in nearby Orange County, where Chevron, DuPont, and other companies have facilities. The third would extend and heighten seawalls around Freeport, home to a Phillips 66 export terminal for liquefied natural gas and nearby refinery, as well as several chemical facilities.

The proposals approved for funding originally called for building more protections along larger swaths of the Texas coast, but they were scaled back and now deliberately focus on refineries.

"That was one of the main reasons we looked at some of those areas," said Tony Williams, environmental review coordinator for the Texas Land Commissioner's Office.

Oil and chemical companies also pushed for more protection for surrounding communities to shield their workforces, but "not every property can be protected," said Sheri Willey, deputy chief of project management for the Army Corps of Engineers' upper Texas district.

"Our regulations tell us what benefits we need to include, and they have to be national economic benefits," Willey said. 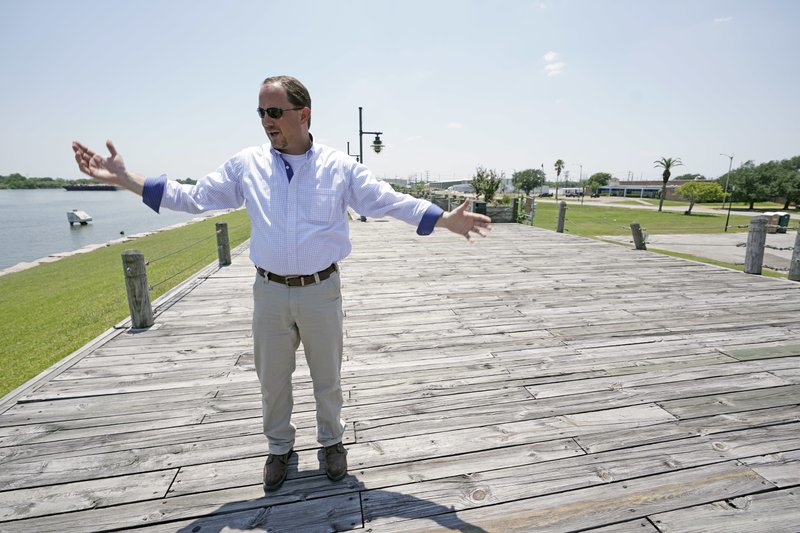 Resident Engineer Steve Sherrill, with the US Army Corps of Engineers, talks about the project to raise some of the levees and seawalls in the area Thursday, July 26, 2018, in Port Arthur, Texas. As the nation plans new defenses against the more powerful storms and higher tides expected from climate change, one project stands out: an ambitious proposal to build a nearly 60-mile “spine” of concrete seawalls, earthen barriers, floating gates, and steel levees on the Texas Gulf Coast. (AP Photo/David J. Phillip)

Once work is complete on the three sections, they could eventually be integrated into a larger coastal spine system. In some places along Texas' 370-mile Gulf Coast, 18 feet is lost annually to erosion, threatening to suck more wetlands, roads and buildings into rising seas.

Protecting a wide expanse will be expensive. After Harvey, a special Texas commission prepared a report seeking $61 billion from Congress to "future proof" the state against such natural disasters, without mentioning climate change, which scientists say will cause heavier rains and stronger storms.

Texas has not tapped its own rainy day fund of around $11 billion. According to federal rules, 35 percent of funds spent by the Army Corps of Engineers must be matched by local jurisdictions, and the GOP-controlled state Legislature could help cover such costs. But such spending may be tough for many conservatives to swallow.

Texas "should be funding things like this itself," said Chris Edwards, an economist at the libertarian Cato Institute. "Texans are proud of their conservatism, but, unfortunately, when decisions get made in Washington, that frugality goes out the door."

State officials counter that protecting the oil facilities is a matter of national security.

The effects of the next devastating storm could be felt nationwide," Rep. Randy Weber, a fiercely conservative Republican from suburban Houston who has nonetheless authored legislation backing the coastal spine.

Major oil companies did not return messages seeking comment on funding for the projects. But Suzanne Lemieux, midstream group manager for the American Petroleum Institute, said the industry already pays into programs such as the federal Harbor Maintenance Trust Fund and the Waterways Trust Fund, only to see Congress divert that money elsewhere.

"Do we want to pay again, when we've already paid a tax without it getting used? I'd say the answer is no," she said.

"The coastal spine benefits more than just our industry," Bob Patel, CEO of LyondellBasell, one of the world's largest plastics, chemicals and refining companies, said in March. "It really needs to be a regional effort." 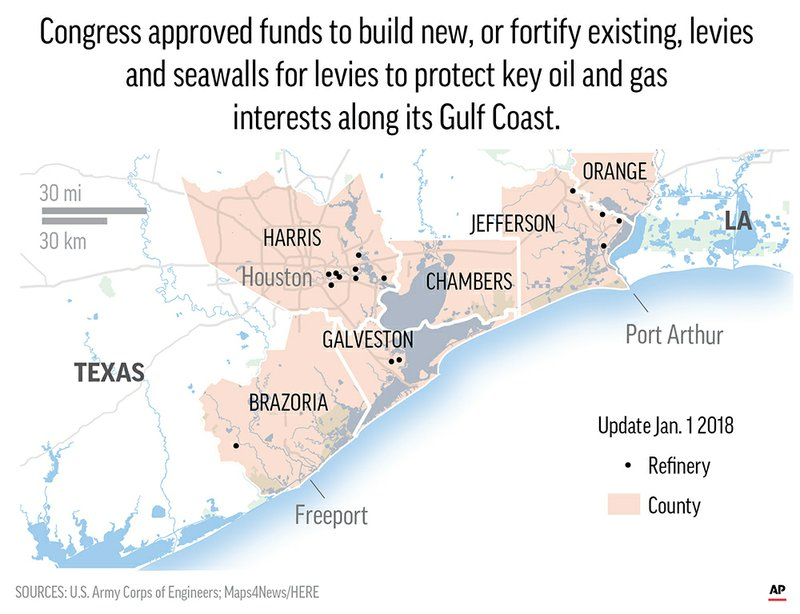 The oil industry wants the government to help protect some of its facilities on the Texas Gulf Coast against the effects of global warming. (AP)