A scattering of hardware stores, barbershops, and corner stores across Puerto Rico are embracing solar energy, trying to wean themselves off a state-owned power company that remains heavily dependent on imported petroleum.

That leaves its 20,000 people once again in the dark, without light, fresh water or air conditioning—except for a handful of homes and businesses glowing in the night thanks to solar energy.

The people of Adjuntas call those places "cucubanos," an indigenous Puerto Rican firefly. They're part of a small but growing movement to provide the U.S. territory with sustainable, renewable energy independent of the decrepit power grid.

A scattering of hardware stores, barbershops, and corner stores across the island are embracing solar energy, trying to wean themselves off a state-owned power company that remains heavily dependent on imported petroleum. The numbers remain small—a few dozen or hundreds out of millions of power users—but power industry officials and environmentalists are closely watching this as a test of whether Puerto Rico can make a large-scale switch to renewable, off-grid energy.

Currently, renewables represent 4 percent of generation at Puerto Rico's power company, against a U.S. national average of 15 percent, so it likely will be years before solar could account for a significant share of Puerto Rico power. 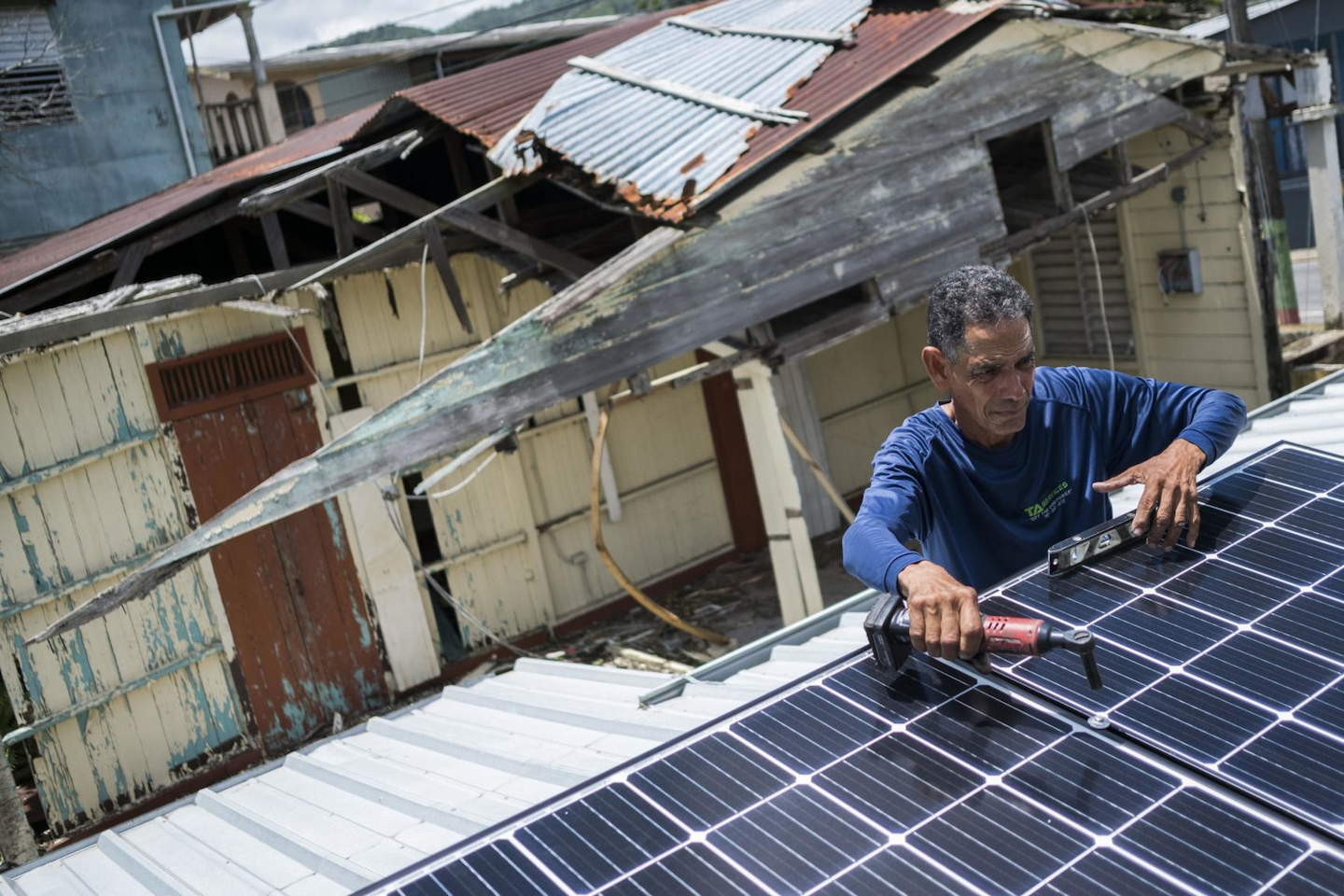 In this July 24, 2018 photo, Julio Rosario installs a solar energy system at a home in Adjuntas, Puerto Rico. The nonprofit environmental group Casa Pueblo has installed solar systems at two hardware stores, one barber shop, and several corner stores that activists hope will serve as a power oasis where people can charge their phones and store medications during a storm if needed. (AP Photo/ Dennis M. Rivera Pichardo)

Even so, "Puerto Rico can be an experimental workshop for solar and wind," Rep. Darren Soto, a Florida Democrat, said at a congressional hearing Wednesday.

While Adjuntas is dotted with solar-powered islands, a community of 12 homes in the mountain town of Las Piedras still lacks central power and is operating exclusively on solar energy provided by Tesla, the high-tech maker of electric cars and other power products. It installed 160 solar panels on a plot of land owned by resident Jose Santana.

Santana, an electronics technician, said he loves the smartphone app that lets him monitor the solar-charged Tesla batteries. He said the government should consider going solar and dumping the current "archaic" power grid.

"This can pull us out of the mess we're in," he said. "There's nothing wrong with having a vision of the future. It's time to start making changes." 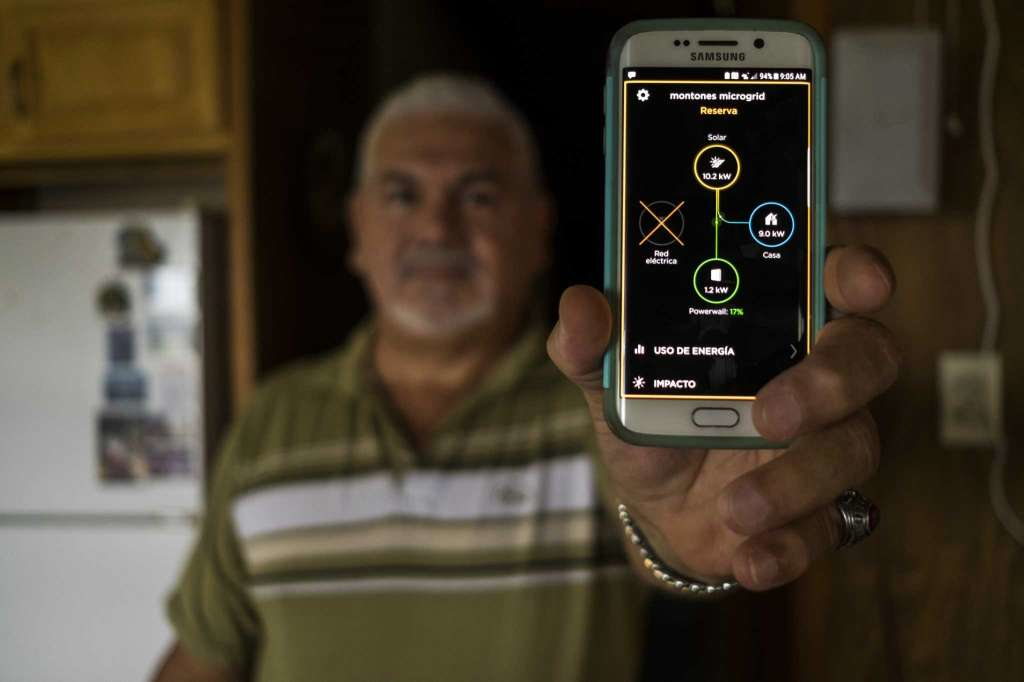 In this July 20 photo, Jose Santana poses for a picture showing his phone app where he can monitor the power generation and consumption of the solar system at his home in Las Piedras, Puerto Rico. Santana, a 64-year-old electronic technician, says he loves the smartphone app that lets him monitor the solar-charged Tesla batteries. He said the government should consider going solar and dumping the current "archaic" power grid. (AP Photo/ Dennis M. Rivera Pichardo)

As in Las Piedras, some solar users are relying on corporations and nonprofit groups to donate the expensive equipment. Others have become so exasperated with continuing outages that they are taking it upon themselves to install their own systems.

"I'm a musician. I have a salsa orchestra. I know nothing about electricity," said Felix Torres, who recently installed nine solar panels on the roof of his home, perched on a mountain in the eastern city of Caguas. "I was afraid of getting electrocuted and damaging equipment worth thousands of dollars...But we should not depend so much on the government. They already have their hands full."

Torres recently joined nearly two dozen other people at a three-day workshop to learn about the costs and lifespans of solar systems, the equipment required, and precautions they need to consider. The clip-clop of horses interrupted their chatter as the sun set on hills where electricity returned several months ago.

Many at the workshop pulled out their power bills along with pens and notebooks as they made comparisons and shared their frustrations. Among them was Jose Barreto, who set up a makeshift solar system at his house in the mountain town of Guavate. 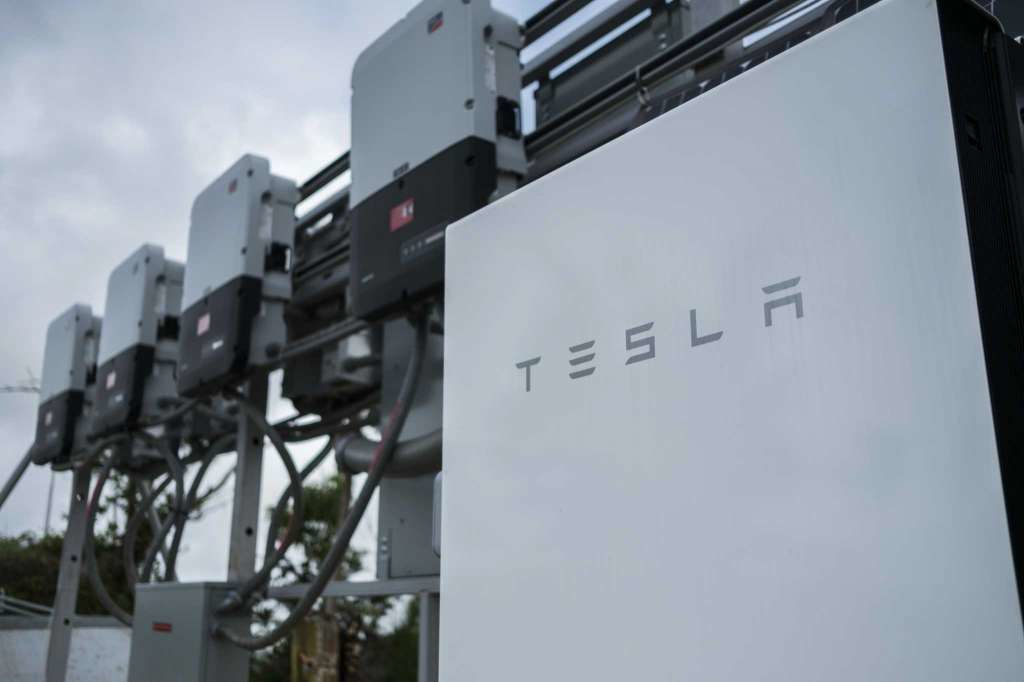 In this July 20 photo, a trailer with batteries and inverters from the Tesla, is parked on top of a hill in Las Piedras, Puerto Rico. Las Piedras still lacks central power is operating exclusively on solar energy provided by Tesla, the high-tech maker of electric cars and other power products, which installed 160 solar panels on a plot of land owned by resident Jose Santana. (AP Photo/ Dennis M. Rivera Pichardo)

"It hasn't collapsed because God is merciful," he said, grumbling that his wife insists on washing and ironing at night, sucking up precious battery life. "I tell her, look, this is a lifestyle that runs on daytime hours."

A few hundred Puerto Ricans still haven't recovered electricity service since Hurricane Maria hit Sept. 20, and millions suffer periodic outages. Crews are trying to fortify the unstable grid in the middle of this year's hurricane season. When the remnants of Tropical Storm Beryl passed through in early July, up to 47,000 customers were left without lights, although most of the power was restored the same day.

In Las Piedras, Blanca Martinez, a retired school bus driver who is married to Santana, started to weep as she described the happiness of having a solar-powered home.

"It's sometimes hard to explain," she said. "When you're a person who is in need, who is suffering, this comes along and you have light without having to worry whether a wire fell." 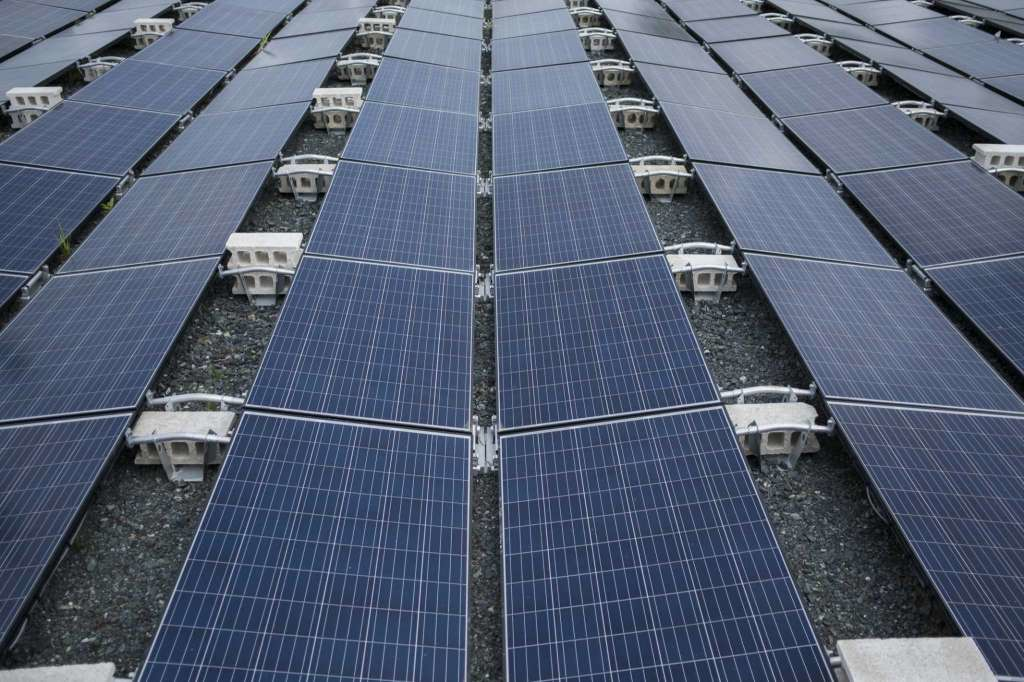 In this July 20 photo, solar panels installed by Tesla, power a community of 12 homes in the mountain town of Las Piedras, Puerto Rico. The homes still do not have power from the national grid, more than 10 months after Hurricane Maria and now is operating exclusively on solar energy. (AP Photo/ Dennis M. Rivera Pichardo)

Adam Gentner, the company's director of business development and Latin American expansion, said the aim is to create a resilient system that can operate regardless of weather conditions.

This week, Siemens published a report in which it envisions the construction of 10 mini-grids across Puerto Rico that would depend on renewable energy. Unlike microgrids, officials said, mini-grids are bigger and can use the current distribution infrastructure.

In Adjuntas, the nonprofit environmental group Casa Pueblo has installed solar systems at two hardware stores, a barber shop, and several small stores that activists hope will serve as power oases where people can charge their phones and store medications during a storm if needed. In upcoming months, some 30 homes also will be fitted with the system. 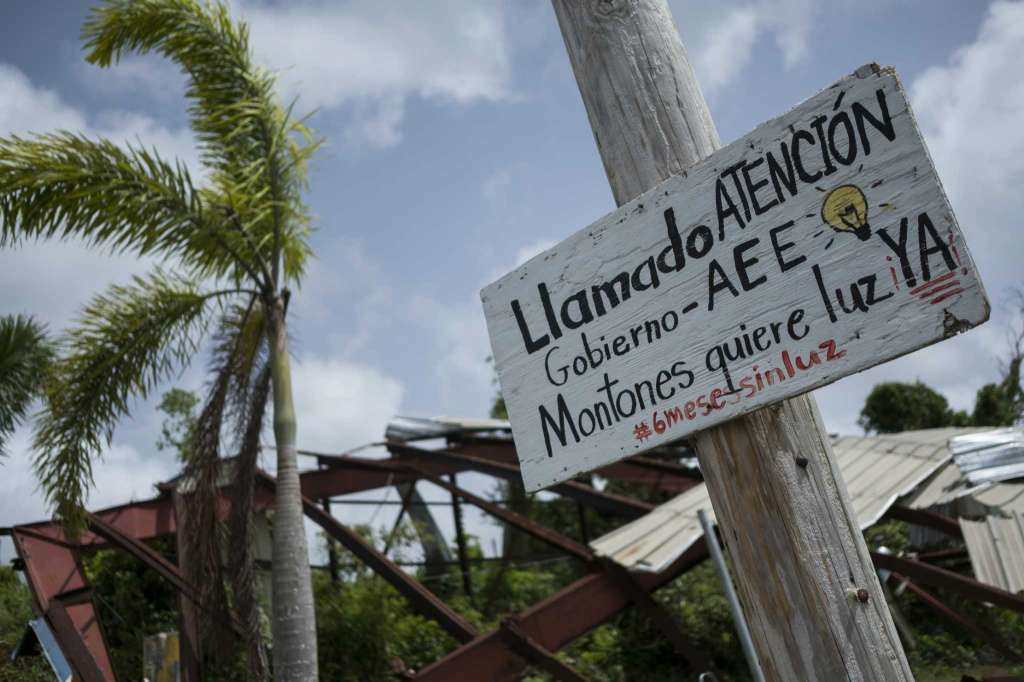 In this July 20 photo, a sign in Spanish that reads "Attention government, AEE. Montones wants light. Six months without light," hangs from a pole in Las Piedras, Puerto Rico. A scattering of hardware stores, barbershops and corner stores across the island are embracing solar energy, trying to wean themselves off a state-owned power company that remains heavily dependent on petroleum. (AP Photo/ Dennis M. Rivera Pichardo)

Wilfredo Perez said he can now open his barbershop 11 hours a day, six days a week thanks to the new system.

"Since it was installed, it hasn't failed me," he said, adding that he hasn't had to switch over to the power company's system. "The electricity in Puerto Rico doesn't work."

Federal officials are growing more worried about the turmoil at Puerto Rico's Electric Power Authority, which has seen five directors since Hurricane Maria. A U.S. House committee held a hearing Wednesday on the company's troubles.

Officials have stressed the need to depoliticize the company, create an independent regulator, and resolve its $9 billion public debt as it prepares to privatize power generation and award concession for transmission and distribution.

None of this worries Arturo Massol, associate director of Casa Pueblo in Adjuntas.

"Let them do what they want over there," he said. "We're taking control of our energy destiny." 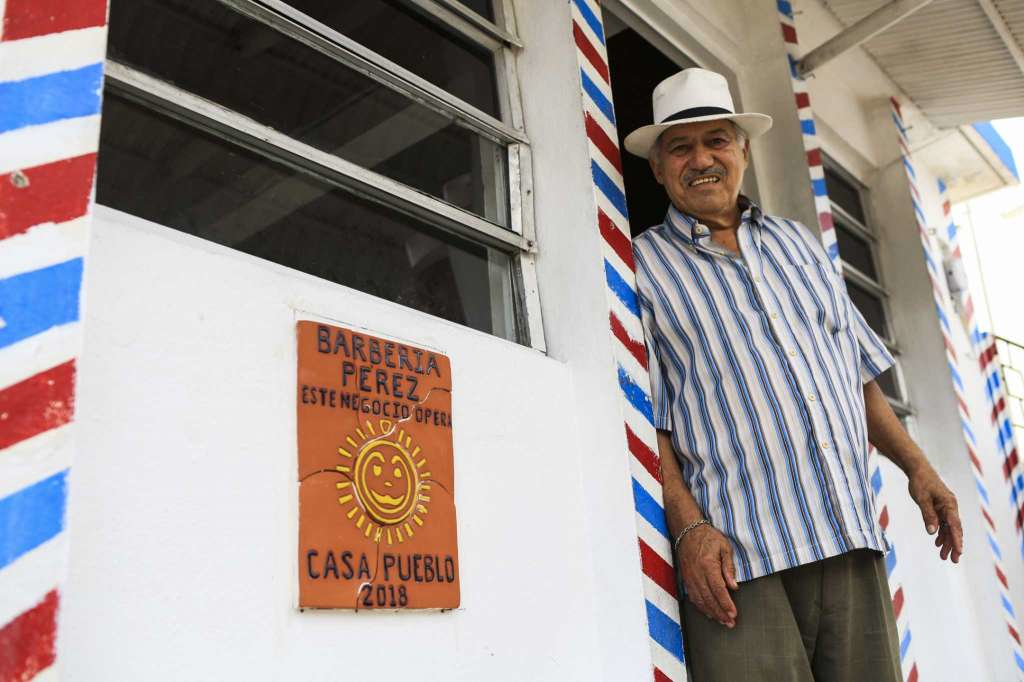 In this July 24, 2018 photo, barber Wilfredo Perez poses for a photo in front of his solar powered barber shop in Adjuntas, Puerto Rico. Perez says he can now open his barbershop 11 hours a day, six days a week thanks to the new system.(AP Photo/ Dennis M. Rivera Pichardo)