The Obama administration is boosting the amount of corn-based ethanol and other renewable fuels in the U.S. gasoline supply despite sustained opposition by an unusual alliance of oil companies, environmentalists and some GOP presidential candidates. 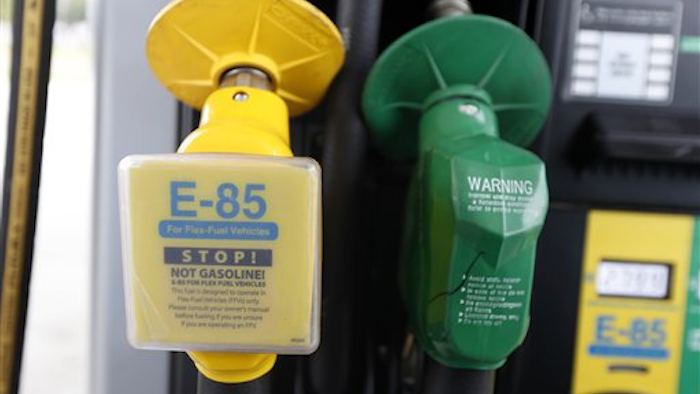 WASHINGTON (AP) — The Obama administration is boosting the amount of corn-based ethanol and other renewable fuels in the U.S. gasoline supply despite sustained opposition by an unusual alliance of oil companies, environmentalists and some GOP presidential candidates.

The Environmental Protection Agency on Monday issued a final rule designed to increase production of ethanol to be blended with gasoline through 2016, a decision that could reverberate in Iowa's crucial presidential caucuses.

The agency said it will require more than 18 billion gallons of renewable fuels, most of it ethanol, in 2016. The amount is less than was set in a 2007 renewable fuels law, but more than was proposed by the EPA in May.

The decision doesn't necessarily mean a higher percentage of ethanol in an individual driver's tank, and isn't likely to have much effect on gas prices. But it does mean there will a higher supply of the homegrown fuel overall.

Janet McCabe, the acting assistant administrator for the EPA's Office of Air and Radiation, said the renewable fuels industry is "an incredible American success story" and the 2016 targets are a signal it is growing.

"It's all about more choice and making those fuels more available" to consumers, she said.

More renewable fuels are good news for farm country. But ethanol critics say the levels are too high.

Oil companies have spent many years fighting the 2007 law, saying the market, not the government, should determine how much ethanol is blended into their gas. Environmental groups say farmers growing large amounts of corn for ethanol are tearing up the land. And conservatives like Texas Sen. Ted Cruz, who is running for the Republican presidential nomination, call the government's longtime support for ethanol "corporate welfare."

The renewable fuels law sought to address global warming, reduce dependence on foreign oil and bolster the rural economy by requiring a steady increase in the overall amount of ethanol and other renewable fuels blended into gasoline over time. The Renewable Fuel Standard, as it is called, sets out specific yearly targets.

Since then, the EPA has said the standards set by the law cannot be fully reached due partly to limits on the amount of renewable fuels other than ethanol that can be produced. Next-generation biofuels, made from agricultural waste such as wood chips and corncobs, have not taken off as quickly as Congress required and the administration expected.

Still, the new rule setting targets for 2015, 2016 and retroactively for 2014 would represent an overall increase in the use of renewable fuels.

The new standards come as President Barack Obama and other world leaders are meeting in Paris to finalize an agreement to cut carbon emissions worldwide, and the administration says this will help achieve that goal. Some studies have called into question whether that is the case, however.

The new targets are a victory for the ethanol industry, which aggressively pushed back on a 2013 proposal that would have decreased the amount of ethanol mixed into fuel.

After the announcement, some ethanol companies and farm groups said they were pleased the EPA had increased the numbers from previous proposals. But they still expressed frustration that the standards were less than in the law, something the agency has the power to do if it thinks the goals cannot be met.

Failing to meet the standards is "to the detriment of economic prosperity in rural America," said National Farmers Union President Roger Johnson.

Farm-state lawmakers — and some presidential candidates wanting to win over voters in farm states like Iowa — have successfully pushed back on calls from opponents to lower ethanol levels or repeal the standards. So far, critics have had little luck getting past those supporters to change the policy in Congress.

In the presidential race, Democrat Hillary Clinton has called for robust renewable fuels standards, and her fellow Democrats have also been supportive.

The issue has divided Republicans.

While some GOP presidential candidates like former Arkansas Gov. Mike Huckabee have spoken about maintaining higher levels of renewable fuels, others like Cruz have denounced the policy. Florida Sen. Marco Rubio has positioned himself somewhere in the middle, saying the standard should not be repealed after many have made investments, but it should be eventually phased out.

Iowa, host of the leadoff presidential caucuses next year, produces more ethanol than any other state. But as national security and the economy have eclipsed farming issues in many rural areas, some candidates, like Cruz, have felt comfortable criticizing it and have still fared well in the polls.