The chairman of the House Science Committee said Wednesday the Environmental Protection Agency's actions in causing a toxic mine spill that fouled rivers in three Western states were "inexcusable." 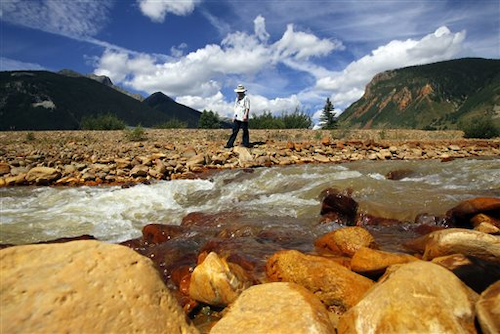 WASHINGTON (AP) — The chairman of the House Science Committee said Wednesday the Environmental Protection Agency's actions in causing a toxic mine spill that fouled rivers in three Western states were "inexcusable."

Rep. Lamar Smith, R-Texas, vowed to hold the agency accountable for its "negligence" in causing the Aug. 5 spill near Silverton, Colorado, and for its "lack of transparency" afterward. The spill tainted rivers in Colorado, New Mexico and Utah with heavy metals.

Smith says the EPA took more than 24 hours to inform the public about the seriousness of the spill and initially underestimated the amount of rust-colored sludge released from the inactive Gold King Mine. A cleanup team doing excavation work triggered the release of 3 million gallons of poisoned water that affected drinking water in the three states and the Navajo Nation, as well as fishing, boating and other recreational activities. The spill also crippled tourism in the area.

Smith said he was disappointed that EPA chief Gina McCarthy declined to attend a hearing Wednesday on the spill, saying: "Perhaps she doesn't have good answers."

EPA Assistant Administrator Mathy Stanislaus, who has overseen the response to the spill, called it "a tragic and unfortunate incident" and said the EPA "has taken responsibility to ensure that it is cleaned up appropriately." The EPA has spent about $8 million on the cleanup so far, Stanislaus said.

Pending investigations from the U.S. Interior Department and the EPA Inspector General should provide guidance on how the agency can avoid a repeat of the Gold King accident, Stanislaus said.

Donald Benn, executive director of the Navajo Nation Environmental Protection Agency, said the federal agency has created "a culture of distrust" with the Navajo in the weeks following the accident.

From the beginning, EPA "has sought to quiet our legitimate concerns, and has made repeated missteps in their response efforts relating to the incident triggered by their own actions," Benn said. EPA officials appear more concerned about mitigating losses and minimizing damage than in finding out how the accident occurred, Benn said, calling the EPA's investigation of the incident inherently flawed.

"No other environmental bad actor would be given this same amount of leeway to investigate itself and determine to what extent it will be held accountable," Benn said.

The Navajo Nation is encouraged that the EPA's inspector general is reviewing this incident but believes another agency should have been designated to lead the spill response, "and an independent body should conduct the investigation of the incident," Benn said.

Several Republican lawmakers lamented McCarthy's absence from the hearing and suggested that if a private company had caused the spill, its CEO would be hauled before Congress. Dennis Greaney, president and managing partner of Environmental Restoration LLC, the St. Louis-based contractor that was working on the mine cleanup when the spill occurred, testified at Wednesday's hearing.

Rep. Don Beyer, D-Va., objected to the hearing's title, given by GOP leaders: "Holding EPA Accountable for Polluting Western Waters." Beyer noted that Gold King Mine is one of about half a million abandoned mines nationwide, including more than 48,000 that have been inventoried through the Bureau of Land Management's Abandoned Mine Lands program.

EPA has estimated the cost of cleaning up abandoned mines nationwide, not including coal mines, at between $20 billion and $54 billion.

"Blaming EPA for the spill is like blaming firefighters for the forest fire," Beyer said.