Business and petroleum groups say they want to be able to explore whether significant oil and gas reserves exist that could stabilize energy prices and help the economy overall. 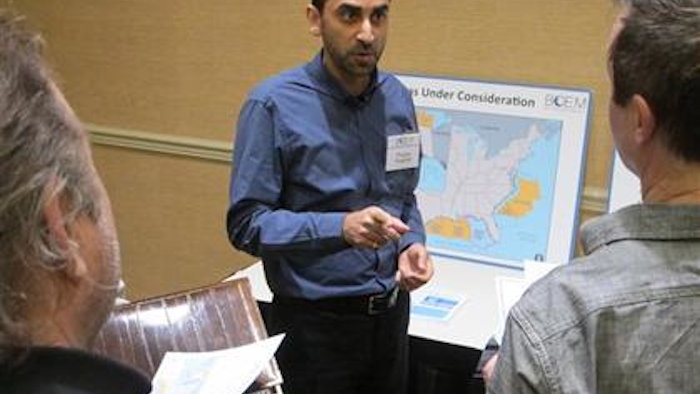 But business and petroleum groups say they want to be able to explore whether significant oil and gas reserves exist that could stabilize energy prices and help the economy overall.

The federal Bureau of Ocean Energy Management proposes opening up a stretch of the East Coast in its latest five-year plan, scheduled to take effect in 2017. The agency also is proposing drilling off the northern Alaska coast and in the western and central Gulf of Mexico between Texas and Alabama.

A final decision on the proposals should be made by the end of 2016.

At a public hearing Wednesday in Atlantic City, New Jersey, environmentalists said an oil spill could devastate the environment and economies in states where tens of millions of people live.

"If something happens to an offshore windmill, a pelican gets hurt; an oil spill is a genuine catastrophe," said Jeff Tittel, director of the New Jersey Sierra Club. "People don't realize where this is is less than 100 miles from the Jersey shore. The president says he wants to do something about climate change, and he proposes this?"

"New Jersey has lost two million recreational fishing trips in the last few years," said Tom Fote of the Jersey Coast Anglers Association. "What happens if there's a spill and people are worried about the water? We keep putting out all these smiley commercials saying all the fish are great in the Gulf of Mexico after the BP spill. But they used tons of dispersant — stuff we don't allow on the East Coast. Who knows what effects that is having on the fish?"

Business groups say the time is right to look for new sources of affordable energy.

"If there are new sources of energy that can stabilize energy prices, that's a win-win for business," said Michael Egenton, senior vice president of the New Jersey State Chamber of Commerce. "That creates jobs and helps the economy by lowering energy prices."

Scott Ross, associate director of the New Jersey Petroleum Council, said the last data on potential oil and gas resources off the central and southern Atlantic coasts is 30 years old. He supports exploration as a way to see if economically feasible deposits exist there.

The East Coast proposal excludes the 50 miles closest to the shoreline between Virginia and the Georgia-Florida border to avoid affecting whales and other marine life that live near the coast. It extends from 50 miles to about 350 miles offshore, to the edge of the Outer Continental Shelf, said Bill Brown, the bureau's chief environmental officer.

In Alaska, the proposed drilling areas encompass parts of the Chukchi and Beaufort seas along the northern coast of the state, extending up to 200 miles offshore. And two drilling areas are proposed in the Gulf Of Mexico running from Brownsville, Texas, to the border between Alabama and the Florida panhandle. Drilling in the eastern Gulf near Florida's Gulf Coast is prohibited by a congressional moratorium, Brown said.