Taking nitrogen from the air and converting it to ammonia under natural conditions is a process that has only happened in nature — until now. Ammonia is a key component of fertilizer, leading the scientists to report that the finding could be an important step toward creating a more eco-friendly fertilizer. 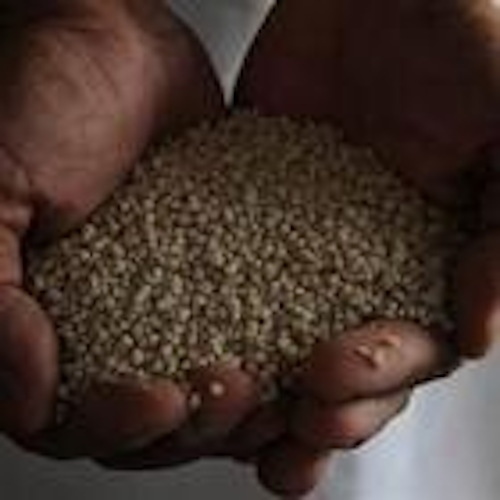 Taking nitrogen from the air and converting it to ammonia under natural conditions is a process that has only happened in nature — until now.

Scientists from Northwestern University recently became the first to develop a catalyst driven by light that can pull off the feat with no temperatures or pressure required.

Ammonia is a key component of fertilizer, leading the scientists to report that the finding could be an important step toward creating a more eco-friendly fertilizer.

One of the pivotal aspects of their discovery was the use of a material the team had developed earlier: a chalcogel. Made of iron, molybdenum and sulfur, the porous material provides an advantageous amount of surface area.

"My colleagues and I said, 'Let's do a crazy experiment,'" said inorganic chemist Mercouri G. Kanatzidis, who led the research. "Let's excite the chalcogel with light, give it some nitrogen and see if the material will reduce the nitrogen to ammonia. To our surprise, we saw ammonia forming, and the ammonia got more and more intense over time."

While successful, the process still has a major downside: It is approximately 1,000 times slower than what can be achieved using nitrogenase, which is typically used to reduce nitrogen.

But they hope this proof of concept will evolve into something bigger.

"Nitrogenase had two or three billion years to evolve," Kanatzidis said. "We are happy that our material reduces nitrogen much like nitrogenase. It's a fantastic starting point. Now we are trying to figure out how this material works and how it can become faster. We've already made some progress in this direction."

The findings were published in the Journal of the American Chemistry Society. Find out more about the research here.