The report, which aired on CBS on Sunday, said that Lumber Liquidators' laminate flooring made in China contains high levels of formaldehyde, a carcinogen. 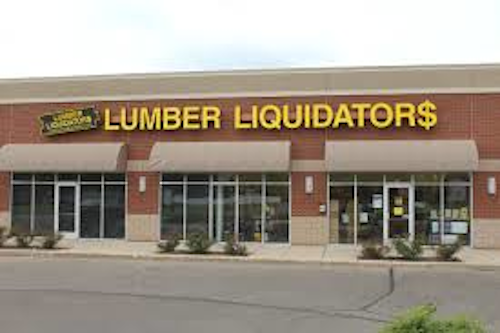 NEW YORK (AP) — Shares of Lumber Liquidators are sliding in Monday premarket trading following a report on "60 Minutes" that the company's laminate flooring made in China may not meet California's health and safety standards. (View the full segment here.)

The "60 Minutes" report, which aired on CBS on Sunday, said that Lumber Liquidators' laminate flooring made in China contains high levels of formaldehyde, a carcinogen.

In the "60 Minutes" report, correspondent Anderson Cooper spoke with Denny Larson, executive director of nonprofit group Global Community Monitor, and environmental attorney Richard Drury. Larson and Drury purchased boxes of laminate flooring from several retailers with California stores, including Lumber Liquidators, and had them sent to three certified labs for testing. The report said that the labs found that Lumber Liquidators' U.S.-made laminate flooring had acceptable levels of formaldehyde, but every sample of its Chinese-made laminate flooring failed to meet California formaldehyde emissions standards.

In addition, "60 Minutes" bought 31 boxes of Lumber Liquidators' Chinese-made laminate flooring at stores in Virginia, Florida, Texas, Illinois and New York to see how those tested. Samples were sent for testing at two certified labs. The report said that only one of the 31 samples of Chinese-made laminate flooring was compliant with California formaldehyde emissions standards.

While flooring is legally allowed to contain formaldehyde, the "60 Minutes" report said that California has strict standards for how much of the chemical the core boards in laminate flooring can emit.

Lumber Liquidators founder and Chairman Tom Sullivan said in an interview with "60 Minutes" that the company is not required by law to test its finished products like "60 Minutes" did.

In a statement put out by the company, Lumber Liquidators said that it complies with applicable regulations for its products, including California standards for formaldehyde emissions for composite wood products.

"These attacks are driven by a small group of short-selling investors who are working together for the sole purpose of making money by lowering our stock price," the company said. Lumber Liquidators said that it would "fight these false attacks on all fronts."

"We stand by every single plank of wood and laminate we sell all around the country," the company added.

Last week Lumber Liquidators' stock declined after President and CEO Robert Lynch said during a Wednesday conference call that the company believed "60 Minutes" was going to "feature our company in an unfavorable light with regard to our sourcing and product quality, specifically related to laminates." Lynch said that Lumber Liquidators would "vigorously challenge any false allegations or factual incorrect presentations."

Lumber Liquidators also disclosed in a regulatory filing on Wednesday that the Department of Justice may seek criminal charges against it under the Lacey Act, which is a U.S. law that includes a ban on illegally sourced wood products and in many cases requires businesses to provide a lot of details about their wood shipments. Lumber Liquidators said in the filing that it will continue to communicate with the Justice Department "regarding its intentions and possible courses of action in this matter."

Last month Lumber Liquidators announced that it invested in a wood products quality testing lab that is housed within its new distribution center outside Richmond, Virginia. A press release the company put out stated that the lab has two temperature- and humidity-controlled conditioning rooms, and two formaldehyde emission chambers that mirror the capabilities of the California Air Resources Board and other emission testing facilities.