After getting state approval, a group of shellfish farmers plan to spray a widely-used neurotoxic pesticide on up to 2,000 acres of commercial shellfish beds. 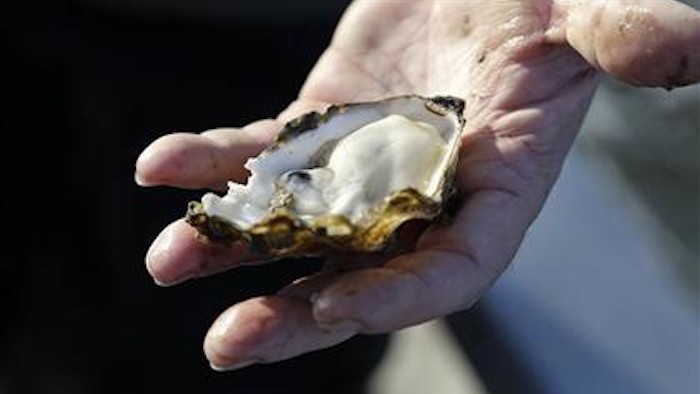 SEATTLE (AP) — For decades, oyster growers in southwest Washington have battled to control native shrimp that burrow in the mudflats and make it hard for oysters to grow.

Now, after getting state approval, a group of shellfish farmers plan to spray a widely-used neurotoxic pesticide on up to 2,000 acres of commercial shellfish beds in Grays Harbor and Willapa Bay. They insist it's a safe way to keep in check a threat to the area's multimillion-dollar shellfish industry.

But critics, including the U.S. Fish and Wildlife Service and the National Oceanic and Atmospheric Administration, worry about unintended harm to other species. The plan is premature, they say, with too many unknowns about the pesticide's effects on other organisms, including those that are a food source for threatened species.

With public and customer concerns rising, one of the big players, Taylor Shellfish Farms, said late Friday that it would back away from treating its oyster beds.

In comments to the state, NOAA noted that state Department of Ecology "is clearly aware that imidacloprid is a persistent broad spectrum pesticide that will kill nearly all benthic (sediment-dwelling) organisms on acreage directly treated."

Research "clearly indicate that effects and damages will not be limited to the treatment sites," added the U.S. Fish and Wildlife Service.

The Ecology Department approved the permit in April, saying the pesticide is less toxic than one previously used, and which is being phased out, and concluded in its environmental review that it's unlikely to result in significant harm to the environment. The permit issued to Willapa Grays Harbor Shellfish Growers Association, a group of about two dozen growers, requires monitoring to ensure there aren't significant harmful effects, the agency said.

"I think we have sufficient information to issue this permit," said Rich Doenges, a department water quality manager.

Helicopter spraying over the two estuaries could begin as early as May 17. Areas can only be sprayed once a year, during daytime low tides. Up to 2,000 acres are allowed a year, so up to 10,000 acres could potentially be sprayed over the five-year permit, the department said.

"Our oyster farmers' livelihoods depend on a healthy ecosystem in order to grow oysters, and we are confident the use of imidacloprid will only enhance and protect the oyster beds and is safe for the environment," the oyster growers said in a recent statement earlier in the week.

Willapa Bay is the largest producer of farmed oysters in the U.S., mostly nonnative Pacific oysters.

Don Gillies, whose ancestors began farming oysters in Willapa Bay in the 1860s and who is president of the growers' group, said the pesticide represents the best bet for controlling the shrimp that churn up mudflats, causing oysters to sink into the mud and suffocate.

He said growers have tried numerous methods, including crushing them, using explosions and injecting a clay barrier, to control the shrimp without much success.

"There were hundreds of alternatives that were tried by individuals and scientists," said Gillies, who farms about 45 acres. "This is the most likely to succeed."

Arguing in part that the new pesticide is less effective compared to the previously used insecticide, the growers also sought to more than double the 800 acres previously sprayed, an increase questioned by NOAA.

Ecology says imidacloprid has been widely used on land but not on shellfish beds.

Manufacturer's labels on household and other products warn not to use imidacloprid in or near waters, but the Ecology Department's Doenges said the formulation approved for the shellfish beds is "specifically authorized in waters."

In March 2013, the U.S. Environmental Protection Agency noted "a number of uncertainties" that require more data and risks to invertebrates and birds but approved its use on the shellfish beds for Grays Harbor and Willapa Bay.

The ghost and mud shrimp are native to the area and play a role in the ecosystem, NOAA and the U.S. Fish and Wildlife Service said. They acknowledged the challenge oysters growers face but urged investigating other ways to grow oysters without chemical control.

"We think shellfish industry plays an important role in our local and state economy but we also think that the health of these incredibly important estuaries shouldn't be compromised in support of the industry," said Trina Bayard, director of bird conservation for the Washington office of the National Audubon Society.