Asbestos waste spills in a gray gash down the flank of a lush green hill above tribal villages in eastern India. Three decades after the mines were abandoned, nothing has been done to remove the enormous, hazardous piles of broken rocks and powdery dust left behind. 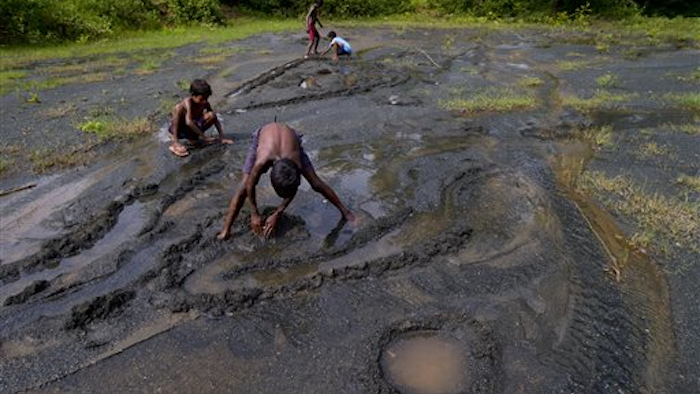 RORO VILLAGE, India — Asbestos waste spills in a gray gash down the flank of a lush green hill above tribal villages in eastern India. Three decades after the mines were abandoned, nothing has been done to remove the enormous, hazardous piles of broken rocks and powdery dust left behind.

In Roro Village and other settlements below, people who never worked in the mines are dying of lung disease. Yet in a country that treats asbestos as a savior that provides cheap building materials for the poor, no one knows the true number and few care to ask.

"I feel weak, drained all the time," Baleman Sundi gasped, pushing the words out before she lost her breath. "But I must work." The 65-year-old paused, inhaled. "I don't have a choice." Another gasp. "I have to eat."

Sundi and 17 others from a clutch of impoverished villages near the abandoned hilltop mines were diagnosed in 2012 with asbestosis, a fatal lung disease. One has since died. Tens of thousands more remain untested and at risk. Asbestos makes up as much as 14.3 percent of the soil around Roro Village, analysis of samples gathered by The Associated Press showed.

The 17 surviving patients are suing in the country's environmental court for cleanup, compensation and a fund for future victims. If they win, the case would set precedents for workplace safety and corporate liability, both often ignored in India.

Neither the government nor the Indian company that ran the mines from 1963 to 1983 has made any move to clean up the estimated 700,000 tons of asbestos tailings and debris left scattered across several kilometers (miles) of hilly mining area.

"The company had followed all rules and procedures for closure of a mine and had complied with the provisions of the law, as in force in 1983," a spokesman for Hyderabad Asbestos Cement Products Ltd., now known as HIL Ltd., told AP.

India placed a moratorium on asbestos mining in 1986, acknowledging it was hazardous to miners. But that was the government's last decision curtailing the spread of asbestos. It has since embraced the mineral as a cheap building material. Today, India is the world's fastest-growing market for asbestos.

India keeps no statistics on how many people have been sickened or died from exposure to asbestos, which industry and many government officials insist is safe when mixed with cement.

Western medical experts strongly disagree. The World Health Organization and more than 50 countries, including the U.S. and all of Europe, say it should be banned in all forms. Asbestos fibers lodge in the lungs and cause many diseases. The International Labor Organization estimates 100,000 people die every year from workplace exposure.

"My greatest concern is what will happen in India. It's a slow-moving disaster, and this is only the beginning," said Philip Landrigan, a prominent New York epidemiologist.

From the top of Roro Hill, a small boy leaped out to slide down the cascade of fluffy grey dust. A few villagers followed, nudging a herd of cows and goats. Huge clouds billowed in their wake.

The villagers often ignore the warnings from visiting doctors or activists to stay away from the waste. Many just don't believe dust and rocks could be dangerous. Others are more fatalistic.

"We tell the children, don't go there. But they are children, you cannot control them," said 56-year-old Jema Sundi, diagnosed with asbestosis though she never went into the mines.

She then noticed her 4-year-old nephew Vijay, his tiny body covered with chalky white streaks, shrinking into himself as if trying to disappear. "You went up there today again?" she exclaimed.

"It's heartbreaking. Kids are playing on it. People are stirring it up. You don't have to inhale much to put a cap on your life," said Richard Fuller of the Blacksmith Institute, a New York-based watchdog that estimates 50,000 people could be at risk.

Hydrabad Asbestos employed about 1,500 people in the Roro asbestos mines in Jharkhand state.

The company said it followed strict health and safety policies, and "no health or environmental damage was reported during the mine operations." It did not say if it sent anyone to check on the villagers' health after the mines closed. Villagers told the AP they were never invited for a company-sponsored checkup after 1983.

The fact that Sundi and the other plaintiffs had the opportunity for a diagnosis was rare. Like most living near Roro Hill, they cannot read or write.

"The idea that the environment, something that has always provided and been taken for granted, could be causing them harm is a notion that just doesn't occur to them," said T.K. Joshi, a doctor who heads India's only university department specializing in occupational health. "And unfortunately, most Indian doctors are not trained to ask the right questions."

Activists, doctors and lawyers have described an almost Kafkaesque effort to hold the government and company accountable over the past decade.

At the time the mines were open, Jharkhand state didn't even exist. The land was part of a wider Bihar state, with its capital and paperwork held in a different city. Neither state has been able to produce the 30-year-old documents about the mine's closure.

"As far as environmental issues are concerned, we have already dealt with it," said Jharkhand's Mining Secretary Arun, who uses only one name.

In 2012, an activist group selected 150 Roro-area villagers for chest X-rays. The plates were examined by Dr. V. Murlidhar, an occupational health specialist, who confirmed 18 had the tell-tale honeycomb pattern that denotes asbestosis.

The results were not surprising, he said, and "more cases are likely" because asbestosis develops over decades of exposure.

Lawyer Krishnendu Mukherjee, who is spearheading the case, has high hopes for a judgment that awards the plaintiffs and future claimants with generous compensation.

A strong verdict, he said, will tell companies such as HIL that "it's not permissible to simply leave a mine, a factory, whatever it is, in a state of abandonment."