Huge, fiery blasts at a warehouse for hazardous chemicals killed at least 50 people and turned nearby buildings into skeletal shells in the Chinese port of Tianjin, raising questions Thursday about whether the materials had been properly stored. 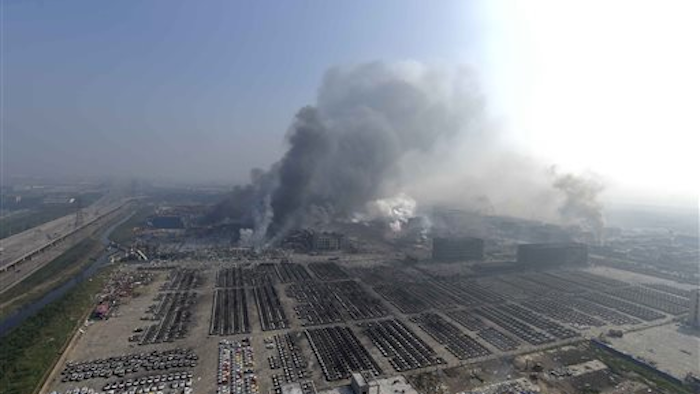 TIANJIN, China (AP) — Huge, fiery blasts at a warehouse for hazardous chemicals killed at least 50 people and turned nearby buildings into skeletal shells in the Chinese port of Tianjin, raising questions Thursday about whether the materials had been properly stored.

Hundreds of people were injured in the explosions shortly before midnight Wednesday, which sent out massive fireballs that turned the night sky into day and shattered windows several kilometers (miles) away. Twelve of the dead were from among the more than 1,000 firefighters sent to the mostly industrial zone to fight the ensuing blaze.

"I thought it was an earthquake, so I rushed downstairs without my shoes on," said Tianjin resident Zhang Siyu, whose home is several kilometers (miles) from the blast site. "Only once I was outside did I realize it was an explosion. There was the huge fireball in the sky with thick clouds. Everybody could see it."

Zhang said she could see wounded people weeping. She said she did not see anyone who had been killed, but "I could feel death."

The municipal government in Tianjin, a key port and petrochemical processing hub about 120 kilometers (75 miles) east of Beijing, said 701 people were injured, including 71 in serious condition. It gave no figure for the missing.

There was no indication of what caused the blasts, and no immediate sign of any toxic cloud in the air as firefighters brought the fire largely under control by morning. However, the Tianjin government suspended further firefighting to allow a team of chemical experts to survey hazardous materials at the site, assess dangers to the environment and decide how best to proceed.

State media said senior management of the company had been detained, and that President Xi Jinping demanded severe punishment for anyone found responsible for the explosions.

"It was like what we were told a nuclear bomb would be like," said truck driver Zhao Zhencheng, who spent the night in the cab of his truck after the blasts. "I've never even thought I'd see such a thing. It was terrifying, but also beautiful."

In a sign of sensitivity over the hazardous materials stored at the warehouse, state broadcaster CCTV went into a live broadcast of a news conference in Tianjin when the head of the municipality's Environmental Protection Bureau chief, Wen Wurui, was speaking. He said there had been no apparent impact on air monitoring stations, but that water samples were still being examined.

However, when a reporter asked him whether the chemicals at the warehouse had been stored far enough away from residences in the area and Wen seemed at a loss for a response, the broadcaster suddenly cut away from the news conference, only to return to it again later.

Authorities said the blasts started at shipping containers at the warehouse owned by Ruihai Logistics, a company that says it stores hazardous materials including flammable petrochemicals, sodium cyanide and toluene diisocyanate.

The initial blast apparently triggered an even bigger one. The National Earthquake Bureau said the first blast was the equivalent of 3 tons of TNT, and the second 21 tons. The enormous fireballs from the blasts rolled through a nearby parking lot, turning a fleet of 1,000 new cars into scorched metal husks.

As is customary during disasters, Chinese authorities tried to keep a tight control over information. Police kept journalists and bystanders away with a cordon about 1 or 2 kilometers (about a mile) from the site. On China's popular microblogging platform of Weibo, some users complained that their posts about the blasts were deleted, and the number of searchable posts on the disaster fluctuated, in a sign that authorities were manipulating or placing limits on the number of posts.

The website of the logistics company became inaccessible Thursday.

The Tianjin government said that because of the blasts it had suspended online access to public corporate records. These records might be used to trace the ownership of Ruihai. It was not clear whether the blackout was due to technical damage related to the explosion. No one answered the phone at the Tianjin Market and Quality Supervision Administration or the Tianjin Administration for Industry and Commerce on Thursday.

Ruihai Logistics said on its website — before it was shut down — that it was established in 2011 and is an approved company for handling hazardous materials. It said it handles 1 million tons of cargo annually.

Photos taken by bystanders and circulating on microblogs show a gigantic fireball high in the sky with a mushroom cloud. Other photos on state media outlets showed a sea of fire that painted the night sky bright orange, with tall plumes of smoke.

About 2 kilometers (1.2 miles) from the explosion site is the luxury Fifth Avenue apartment complex on a road strewn with broken glass and pieces of charred metal thrown from the explosion. Like surrounding buildings, the Mediterranean-style complex had all its windows blown out, and some of its surfaces were scorched.

"It's lucky no one had moved in," said a worker on the site, Liu Junwei, 29. "But for us it's a total loss. Two years of hard work down the drain."

"It had been all quiet, then the sky just lit up brighter than day and it looked like a fireworks show," said another worker on the site who gave just his surname, Li.

Tianjin, with a population of about 15 million, is being promoted by the Chinese government as a center for finance and high-tech industry. The Tianjin Economic Development Area has attracted foreign investors including Motorola, Toyota, Samsung and Novozymes.