Pics of The Day: What Chemical Turned an Ohio Stream Blue?

A chemical leaking from a water treatment plant in Barberton, Ohio gave a local waterway a case of the blues. 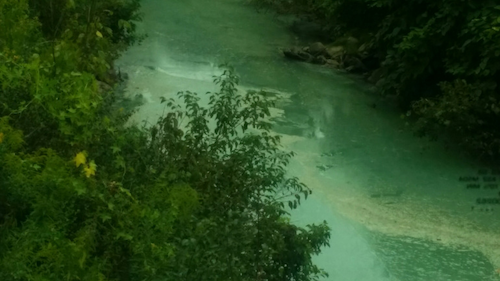 A chemical leaking from a water treatment plant in Barberton, Ohio, which is outside Akron, gave a local waterway a case of the blues.

Which chemical was the culprit? According to an Ohio EPA spokesperson, it was aluminum sulfate.

The chemical is a coagulant that removes organic material from drinking water by binding it together and sinking it to the bottom of the water so it can be collected.

Local media reported that the leak happened as an employee at the water treatment plant worked on repairing a leak from one of the plant’s tanks. To fix the leak, the tanks were emptied into a lagoon — but the lagoon filled up, and some of the water spilled into a nearby creek.

Local drinking water was not affected by the spill. The local director of utilities said that the water was not dangerous and in fact, was “less harmful than shampoo.”

Fresh water was pumped into the water to dilute the contamination.