Tiny plastic bits, collectively known as called microplastics, are showing up in bodies of water around the world, and are accumulating in aquatic creatures, including fish and shellfish. 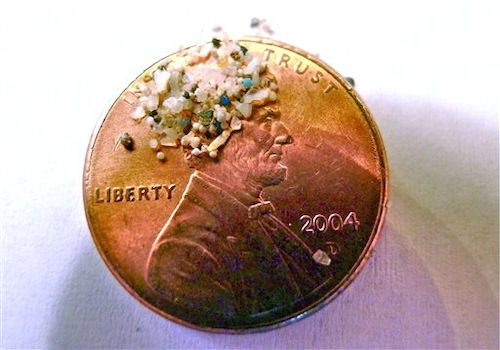 Tiny plastic bits, collectively known as called microplastics, are showing up in bodies of water around the world, and are accumulating in aquatic creatures, including fish and shellfish. Now scientists, after testing a sampling of commercial products in China, have reported for the first time that they also could be contaminating something else we consume from the sea salt. Their study appears in ACS' journal Environmental Science & Technology.

Microplastics are defined as plastic particles smaller than 5 millimeters in size. They come from a variety of sources, including industrial waste, personal care products and plastic litter that degrade in the environment. What this pollution means for aquatic life and people who consume seafood isn't clear, but experts have raised concerns about potential health effects. Some lab tests have shown nano-sized plastic fragments can enter cells and cause tissue damage. With increasing reports on this issue, Huahong Shi and colleagues wanted to see whether microplastics might also be in sea salt. The seasoning is made by evaporating sea water and is now a popular alternative to regular table salt, which comes from underground deposits.

The researchers tested 15 brands of sea salts, lake salts, and rock and well salts from underground deposits purchased at Chinese supermarkets. The sea salts contained the highest concentrations of microplastics from 550 to 681 particles per kilogram. Rock and well salts had the lowest amounts ranging from 7 to 204 particles per kilogram, suggesting these salts from dry deposits likely get contaminated during processing. If adults were to consume sea salt at the recommended nutritional level for the seasoning, they could potentially ingest 1,000 microplastic particles every year from that source. For the sake of comparison, another study has estimated that many Europeans consume about 11,000 of these particles every year by eating contaminated shellfish.