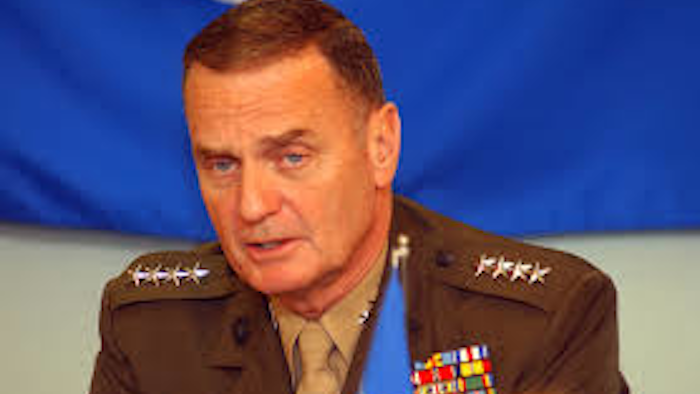 The comments by retired Gen. James Jones came as Democrats grappled with the election-year dilemma that the pipeline poses for them. Wealthy Democratic donors are funding candidates who oppose the project — a high-profile symbol of the political debate over climate change. But other Democrats are boosters of the pipeline and the party's control of the Senate after the 2014 midterm elections may hinge on them.

Jones told the Senate Foreign Relations Committee that the Canada-to-Texas pipeline is a litmus test of whether the U.S. is serious about national and global energy security. Approval of the pipeline would help ensure that North America becomes a global energy hub and a reliable energy source to the U.S and its allies, Jones said. Rejecting the pipeline would "make Mr. Putin's day and strengthen his hand."

Jones, who left the Obama administration in 2010, now heads a consulting firm that has done work for the American Petroleum Institute, the oil industry's chief trade group, and the U.S. Chamber of Commerce. Both groups support the pipeline, which is backed by a number of Senate Democrats facing tight re-election races, including Mary Landrieu of Louisiana, Mark Begich of Alaska and Mark Pryor of Arkansas.

Landrieu, who chairs the Senate Energy Committee, pressed Secretary of State John Kerry on the pipeline issue Thursday at an appropriations hearing. Landrieu called approval of the pipeline "critical" to the national interest and said that in Louisiana, "it's hard for us to even understand why there is a question" whether it should be approved. The State Department has jurisdiction over the pipeline because it crosses a U.S. border.

Kerry told Landrieu he was "not at liberty to go into my thinking at this point," but added: "I'm going to look at all the arguments, both sides, all sides, whatever, evaluate them and make the best judgment I can about what is in the national interest."

Meanwhile, a top Democratic donor again urged that the pipeline be rejected.

Tom Steyer, a billionaire environmentalist, has vowed to spend $100 million —$50 million of his own money and $50 million from other donors — to make climate change a top-tier issue in the 2014 elections.

Steyer, who spent more than $10 million to help elect Virginia Gov. Terry McAuliffe and Sen. Edward Markey, D-Mass., last year, declined to comment on where his advocacy group, NextGen Climate Action, would spend money this fall. But in a conference call with reporters Thursday, he noted the views of Landrieu and other endangered Democratic incumbents were well known.

"I think those senators voted on this long before 2014," he said, "so I don't think there's any real change here."

Steyer hosted a fundraiser last month at his San Francisco home attended by at least six Democratic senators, including Senate Majority Leader Harry Reid of Nevada. The event, which raised $400,000 for the Democratic Senatorial Campaign Committee, also was attended by former Vice President Al Gore, who said the party needs to make global warming a central issue in the midterm elections.

Chris Lehane, a Democratic strategist who advises Steyer, has said the group would not go after Democrats, even those who support the pipeline.

"We're certainly not subscribing to what I would call the tea party theory of politics," Lehane said. "We do think it's really, really important from a climate perspective that we maintain control of the Senate for Democrats."

Steyer said Thursday he has not decided whether to spend money in Colorado, where Democratic Sen. Mark Udall is likely to be challenged by GOP Rep. Cory Gardner. Udall was among more than 30 Democratic senators who engaged in a talkathon urging action on climate change this week, but he has largely stayed out of the Keystone fight. Udall voted against budget amendments urging both support and rejection of thepipeline, arguing that they injected politics into a process that should remain at the State Department.

Senate Foreign Relations Chairman Robert Menendez, D-N.J., said he hoped Thursday's hearing would offer "a balanced, thoughtful" approach that "puts aside some of the politics that have surrounded this debate" over the pipeline.

"We are here to find answers and shed more light than heat on the issue," Menendez said, although the hearing soon devolved into a series of claims and counterclaims.

The $5.3 billion pipeline would carry oil derived from tar sands in western Canada through the U.S. heartland to refineries on the Texas Gulf Coast.

Pipeline supporters, including lawmakers from both parties and many business and labor groups, say the project would create thousands of jobs and reduce the need for oil imports from Venezuela and other politically turbulent countries.

Opponents say the pipeline would carry "dirty oil" that contributes to global warming. They also worry about possible spills.

James Hansen, a climate scientist who has warned that approval of the pipeline means "game over" for efforts to stop climate change, told the Foreign Relations panel that the only way to ensure that Canada's vast tar sands are not developed is to defeat the pipeline.

"This is 'game over' if you don't understand that we have to leave that extremely large amount of carbon in the ground," Hansen said.

The State Department said in a Jan. 31 report that building the pipeline would not significantly boost carbon emissions because the oil was likely to find its way to market no matter what. Transporting the oil by rail or truck would cause greater environmental problems than the pipeline, the report said.

Obama told governors at a White House meeting last month that he expects to decide on the pipeline in the next couple of months.