It remains to be seen just how much of a lasting natural gas-price spike people in the West will feel after a dramatic explosion and fire at a major gas processing plant in western Wyoming. 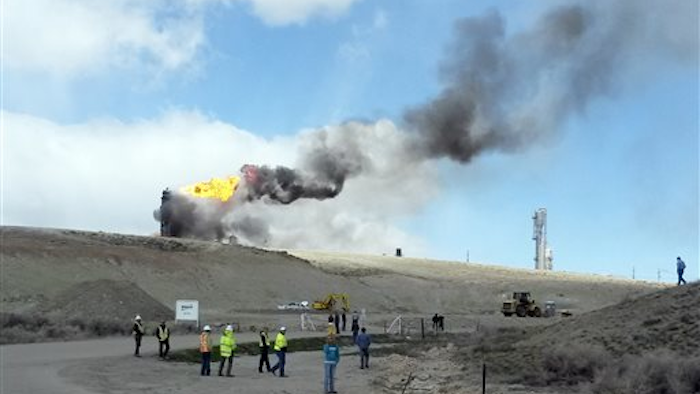 CHEYENNE, Wyo. (AP) — It remains to be seen just how much of a lasting natural gas-price spike people in the West will feel after a dramatic explosion and fire at a major gas processing plant in western Wyoming.

Luck will insulate consumers from a price spike at least somewhat: The explosion happened at a time of year of weak gas demand. Consumers also will be helped by the extra capacity in pipelines and the fact that at least one nearby gas plant already is picking up the slack.

The Williams Partners LP plant at Opal had been processing about 1 billion cubic feet of gas per day, or enough to supply 5 million average U.S. households. The plant separated carbon dioxide and other impurities from the methane fuel drilled from vast gas fields that sprawl across the remote, sagebrush-covered expanses of western Wyoming and northern Utah.

Once processed, the gas went by pipeline everywhere from the Pacific Northwest to southern California and as far east as Ohio. But a day after the explosion and roaring inferno visible for miles around, gas was going nowhere from the heavily damaged plant.

The plant could be running again within a week but only at reduced capacity, experts said.

"We'll have to wait a few days to see how it's going to play out. I doubt there's perfect redundancy," Brian Jeffries, executive director of the Wyoming Pipeline Authority, said Thursday.

The timing could have been a lot worse, Jeffries said.

"It's the time of year where having gas supply out of commission for whatever period of time is more tolerable, certainly, than in the middle of winter or during a hot summer when you're using a lot of natural gas for electric generation to run air conditioners," he said.

"California will see a slight price hike but not a lasting impact," predicted the analyst, Wei Chien.

Genscape recorded a combined decline of 257 million cubic feet of day in Ruby Pipeline from Opal to the West Coast and in the Kern River pipeline to southern California, Chien said.

Meanwhile, processing was set to surge by 684 million cubic feet per day at the Houston-based Enterprise Products Partners, LP, Pioneer gas-processing plant at Opal, she said.

The Pioneer plant was processing some of the gas produced by Houston-based Ultra Petroleum in the Upper Green River Basin. Ultra is one of three operators on the massive Pinedale Anticline gas field 70 miles north of Opal; Shell and QEP Resources are the other two.

All of Ultra's gas production that was being processed by the Williams plant had been shifted to the Pioneer plant, Ultra spokeswoman Julie Danvers said in an emailed statement.

"As a result, flow interruptions have been minimized and we expect production impacts to be insignificant," she said.

The Pioneer plant had extra capacity to take the increase, Enterprise spokesman Rick Rainey said. "It's not uncommon when you have situations like this, when you have a plant go down, ours is will situated to accommodate those diverted volumes," he said.

Meanwhile, pipelines in the region should be sufficiently redundant and have enough unused capacity to handle rerouting of processed and unprocessed gas, Jeffries said.

Opal is perhaps best known as a major regional gas-pricing hub. Industry and government officials and investors watch Opal gas prices as they monitor trends in the gas market.

Neither authorities nor Tulsa, Okla.-based Williams have said what may have caused the explosion. Tom Droege, a William spokesman, said the cause would be investigated in cooperation with regulators and local authorities.