Montana officials said they intend to release details next week on the frequency of oil trains passing through the state, despite efforts by railroads to keep the information from the public after a string of fiery accidents raised safety concerns. 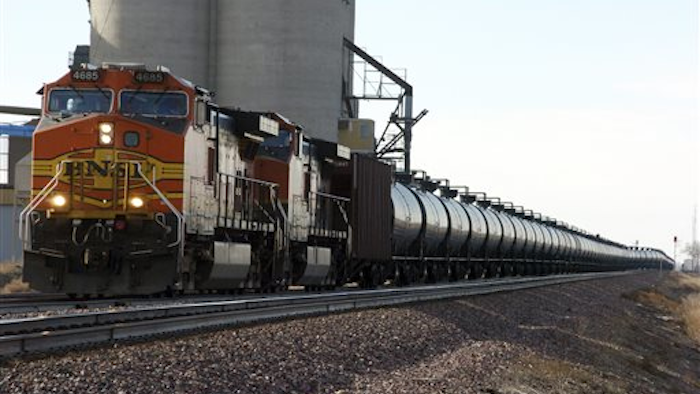 BILLINGS, Mont. (AP) — Montana officials said they intend to release details next week on the frequency of oil trains passing through the state, despite efforts by railroads to keep the information from the public after a string of fiery accidents raised safety concerns.

Railroads across the country have sought to restrict further disclosure by the states, arguing that the order covered confidential information that could be misused if it were made public.

But Andrew Huff, chief legal counsel for Gov. Steve Bullock, said federal transportation officials confirmed that the information was not considered security sensitive under federal regulations. Huff said its release was mandated under state law, and it would help protect public safety by raising community awareness.

"Part of the whole reason the federal government ordered that this information be given to states is to protect the communities through which these trains roll," Huff told The Associated Press. "If there's not some federal pre-emption or specific regulation or statute that prevents release of this information, then under our records laws we have to release it."

Some states have agreed to keep it confidential, including California, New Jersey, Virginia, Minnesota, Colorado and Pennsylvania. Officials in New York, North Dakota and Wisconsin are still weighing the issue and whether any restrictions would violate state open record laws.

BNSF Railway — the main carrier of crude oil in many western states — was notified late Tuesday of Montana's intentions. A representative of the Texas-based company had said in a June 13 letter that BNSF would consider legal action if Montana moves to release the details on oil shipments.

"We must be cognizant that there is a real potential for the criminal misuse of this data in a way that could cause harm to your community or other communities along the rail route," wrote Patrick Brady, BNSF's director of hazardous materials, in a letter to a senior official at the Montana Department of Environmental Quality.

Company spokesman Matt Jones said Wednesday that at this time BNSF has no plans to ask a court to intervene. While it's important for emergency planners to have the information, Jones added, BNSF will "continue to urge discretion in the wider distribution of specific details."

A second railroad, Montana Rail Link, submitted a notification earlier this month revealing that it was moving three trains a week through Montana and Idaho carrying at least 1 million gallons of oil apiece. The railroad said the trains pass through as many as 12 counties across southern and western Montana and through Bonner County in Idaho, according to a copy of the document obtained by The Associated Press.

U.S. crude oil shipments by rail topped a record 110,000 carloads in the first quarter of 2014. That was the highest volume ever moved by rail, spurred by booming production of shale oil from the Northern Plains and other parts of the country, according to the Association of American Railroads.

The number of shipments has increased from fewer than 10,000 carloads annually just six years ago, and has led to major derailments and fires in North Dakota, Alabama, Virginia and Quebec, where 47 people died on July 6, 2013, when a runaway oil train exploded in the town of Lac-Megantic.