A saltwater spill from an underground pipeline in North Dakota has renewed calls from farmers and environmentalists to require new monitoring to help ensure that such breaches are prevented or caught quickly. 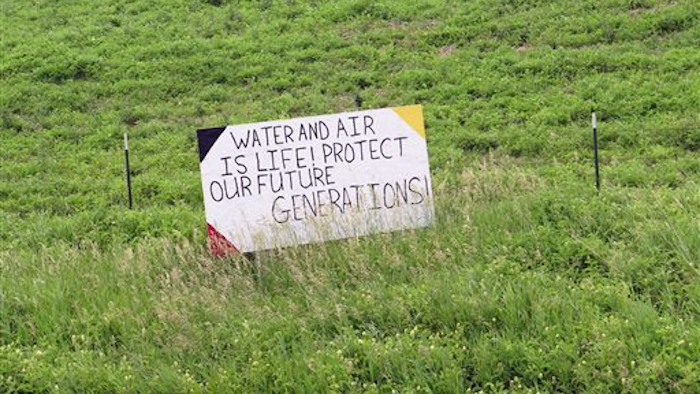 MANDAREE, N.D. (AP) — A saltwater spill from an underground pipeline in North Dakota has renewed calls from farmers and environmentalists to require new monitoring to help ensure that such breaches are prevented or caught quickly.

State Rep. Dick Anderson, a Republican farmer from Willow City, said he plans to revisit legislation the state Legislature rejected last year that would mandate flow meters and cutoff switches on such lines.

"This is a serious problem that has become almost a weekly occurrence and we've got to do something," Anderson said.

The measure failed 86-4 after encountering resistance from oil companies that argued the additional monitoring would be too expensive. State regulators said such safeguards are ineffective on small holes because the leaks would not be strong enough to be detected.

Anderson agrees that monitoring alone might not prevent future spills, but he wants to use the technology in conjunction with more frequent checks by pipeline companies, spill-sniffing dogs and even aerial drones that can detect breaches.

"I think the answer is we're going to have to use all these," he said. "We've got to do something."

The pipeline that separated, likely over the Fourth of July weekend, was not equipped with a system that sends an alert when there is a leak. The company said the spill was discovered when officials were going through production loss reports.

Wayde Schafer, a North Dakota spokesman for the Sierra Club, said the number of recent catastrophic spillsis "bordering on negligence."

He points to a trio of recent spills at saltwater disposal facilities have been destroyed by fires and explosions sparked by lightning strikes and a spill near a tributary of the Little Missouri River that was blamed on a cow that rubbed against a tank valve.

"These people have to tighten up their act," Schafer said. "This is outrageous. The regulating agencies and industry need to take this more serious."

The Environmental Protection Agency said it had no confirmed reports that the saltwater from the latest spillreached Bear Den Bay on Lake Sakakawea. The water body provides water for the Fort Berthold Indian Reservation occupied by the Mandan, Hidatsa and Arikara tribes in the heart of western North Dakota's booming oil patch.

The EPA said most of the spill was pooled on the ground, soaked into the soil and held behind beaver dams. It said the leak involved an estimated 24,000 barrels, or 1 million gallons, of saltwater and condensate, byproducts of oil and gas production.

Cleanup was expected to last for weeks, according to Houston-based Crestwood Midstream Partners LP. The underground pipeline is owned by Crestwood subsidiary Arrow Pipeline LLC.

North Dakota, the nation's No. 2 oil producer behind Texas, also produces millions of barrels of briny wastewater daily that can be 30 times saltier than sea water and must be sequestered underground forever.

There were 74 pipeline leaks in 2013 that spilled 22,000 barrels of saltwater, 17,000 barrels of which was from a single mishap in Bowman County, state records show.