When state inspectors showed up unannounced at Freedom Industries to investigate a licorice odor wafting across West Virginia's capital city, company executive Dennis Farrell seemed to brush off any cause for concern. But inspectors quickly found what was already contaminating the water for some 300,000 people: a chemical oozing from an above-ground tank. 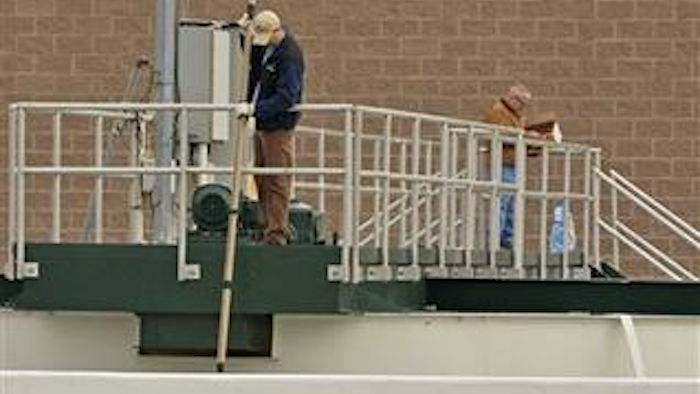 CHARLESTON, W.Va. (AP) — When state inspectors showed up unannounced at Freedom Industries to investigate a licorice odor wafting across West Virginia's capital city, company executive Dennis Farrell seemed to brush off any cause for concern.

But inspectors quickly found what was already contaminating the water for some 300,000 people: a chemical oozing from an above-ground tank and escaping through an old, cracked containment wall. A bag of absorbent material had been placed nearby and weighed down with a cinder block in a failed attempt to stop the flow.

"When they approached the tank, (Farrell) said they just discovered a leak," Jesse Adkins, the inspectors' supervisor, said.

The encounter between state officials and Freedom Industries provides a window into the little-known and lightly regulated firm whose spill of a coal-cleaning chemical contaminated the drinking water for West Virginia's capital city. The consequences from the spill — government investigations and lawsuits — mark the biggest crisis that Freedom Industries has faced in its nearly 22-year history since one of its founders went to prison on tax charges. The U.S. attorney has pledged to determine who is responsible, and numerous businesses have sued because they were forced to close and lost money until the water was safe again.

A spokesman for Freedom declined to comment Tuesday. The company's president, Gary Southern, answered questions at a brief press conference Friday that ended shortly after he complained that he was tired. Farrell said Tuesday that he could not discuss the spill or the company's operations.

The terminal with the leak — which hadn't been inspected by state officials since 2001, when it was owned by a different company operating under more stringent rules — was bought by Freedom Industries last month, state officials said. It was previously owned by Etowah River Terminal LLC, a company that effectively operated as an arm of Freedom Industries even before the two firms officially merged at the end of December.

Etowah was formed in 2001 to purchase the terminal site, and Freedom was the sole member of the Etowah corporation, according to legal filings and corporate records. The tanks allowed Freedom to receive barge shipments of chemicals.

Freedom Industries traces its start back to 1992, when Carl Kennedy II filed the incorporation papers. Kennedy and Farrell owned a 50-50 stake in the venture, according to a legal claim that Freedom Industries filed years later against Kennedy. During its early years, the company sold chemicals designed to prevent airborne dust on coal haul roads. It averaged roughly $50,000 to $60,000 in annual revenue.

That business effectively ended in 1997 when Farrell went to work for another company, Tetra Chemicals Inc.

He did not stay long. The following year, Farrell and several other employees at Tetra decided to start their own company specializing in mining products, dust control chemicals and other chemicals. The chemists and chemical engineers in that group wanted to add a facility so they could blend chemical products that would then be sold, according to legal filings.

Rather than create a company from scratch, Farrell folded the new business venture into the corporate structure that Kennedy created for Freedom Industries, which still existed on paper but was doing little to no real business.

As a privately held company, Freedom Industries was not required to file detailed financial records for the public. However, there are indications that the company was growing. Kennedy owned 5 percent of Freedom's stock, which he estimated was worth $675,000 when he filed for bankruptcy in 2005.

Kennedy would eventually cause a crisis for the company. As an accountant and officer for Freedom Industries and two related companies, Kennedy was responsible for collecting taxes from employees' paychecks and then turning them over to the government.

But in early 2004, he received a visit from a federal investigator who told him they were looking into allegations of tax fraud. Kennedy's response: He knew they were coming, he had crossed a line, and he would eventually have to pay the IRS back.

The comments were included in transcripts of a court hearing after Kennedy pleaded guilty to tax evasion and willful failure to pay employees' withholdings. He was sentenced to three years in prison, but his sentence was later reduced to a year and a half.

A phone listing for Kennedy could not be immediately found, and his former lawyers did not return messages seeking comment. Farrell said Kennedy had not been with the company for years.

Prosecutors accused Kennedy of withholding more than $1 million from employees' paychecks between 2000 and 2003 — and diverting some of that money for his personal use.

During the case, Kennedy disclosed that he owned a 1981 Piper Warrior Airplane and land in Rum Cay in the Bahamas. He said that he and Farrell each owned several lots on the island.

In the court transcripts, the government hinted that Kennedy was not alone.

"Kennedy, with the knowledge and consent of at least one other person, prepared false books and records which claimed that withheld taxes had, in fact, been paid to the IRS, when, in fact, Kennedy and the other responsible person knew they had not," according to the document.

But prosecutors didn't name the other person who might have known.

In the transcript, Kennedy told a prosecutor that "there were two other individuals in the corporation that were aware that the taxes were not turned over to the government."