"It is obvious...that the whole purpose of Chemours' existence was so DuPont could rid itself of the black hole of environmental liabilities that will drag down the company for years if not decades to come," the firm wrote. 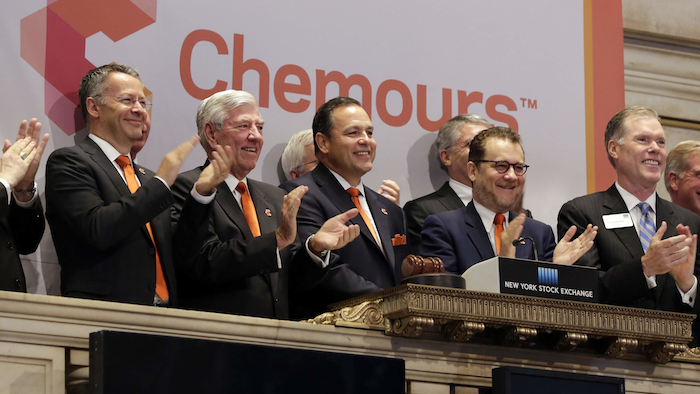 A recent report alleged that Chemours Co. was spun off from DuPont specifically to declare bankruptcy as it faces millions in potential costs related to decades of environmental contamination.

The Charleston Gazette-Mail added that Citron Research, published by investor Andrew Left, also characterized Chemours as "the most morally and financially bankrupt company that we have ever witnessed."

"It is obvious to Citron, and many other journalistic outlets, that the whole purpose of Chemours' existence was so DuPont could rid itself of the black hole of environmental liabilities that will drag down the company for years if not decades to come," the firm wrote in its report.

DuPont last year spun its chemical operations into Chemours in what officials called on effort to streamline its operations and focus on higher-growth segments.

The move, however, prompted concerns from DuPont critics in West Virginia and Ohio, who questioned which entity would be responsible for costs from thousands of lawsuits over water contamination from DuPont's former Washington Works plant near Parkersburg, W.Va.

The plant produced C8 -- also known as perfluorooctanoate acid or PFOA -- for use in non-stick coatings and other products for decades, but the chemical, linked to a slew of health problems, also leaked into the Ohio River and other nearby waterways.

More than 3,500 people affected by C8-linked conditions filed personal-injury lawsuits against DuPont; collectively, those plaintiffs are seeking more than $1 billion in damages.

Chemours, however, has struggled financially since the spinoff was completed and recently sought and received millions from its native Delaware to retain hundreds of jobs.

Attorneys for the plaintiffs recently warned that Chemours could fight DuPont over its liability in the cases.

DuPont, meanwhile, indicated that it hasn't decided how liability would be determined under a pending merger with Dow Chemical.

"Citron thinks the most likely scenario is that Chemours goes bankrupt within 18 months ... just long enough for the new Dow/DuPont to split into three companies, and create separate entities that will all fight for indemnification from this financial toxic dumpsite of liabilities," the firm concluded.