In Washington state, organizers targeted two refineries that are among the top sources of greenhouse gas emissions in the state. 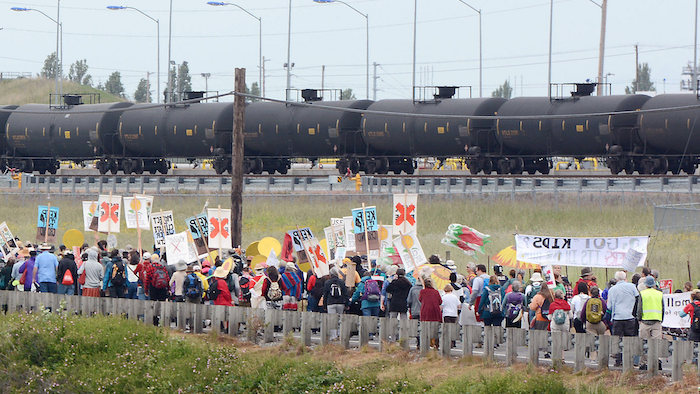 About 150 people spent the night in tents and sleeping bags on the tracks near two refineries in northwest Washington, according to BNSF Railway spokesman Gus Melonas.

They were asked to leave at about 5 a.m. and most gathered their belongings and left the area near Anacortes, Melonas said.

"It was peaceful," he said. "Eighty percent removed their belongings and cleared out."

The 52 people arrested were cited for trespassing, according to the Skagit County Department of Emergency Management. One person was also cited for resisting arrest.

Skagit County Sheriff Will Reichardt said that before anyone was arrested, officers advised protesters that they could move to another designated location and demonstrate.

A spokeswoman for the protesters said she expected everyone arrested would be processed and released from police custody.

Emily Johnston said protests would continue around Anacortes on Sunday, but she didn't expect people to return to the railroad tracks.

Johnston, who had participated in a blockade of the Seattle harbor to protest Shell Oil's plans to drill for oil in the Arctic, said the success of protests like the one in Anacortes can mostly be seen in the way they inspire people to speak out about climate change. 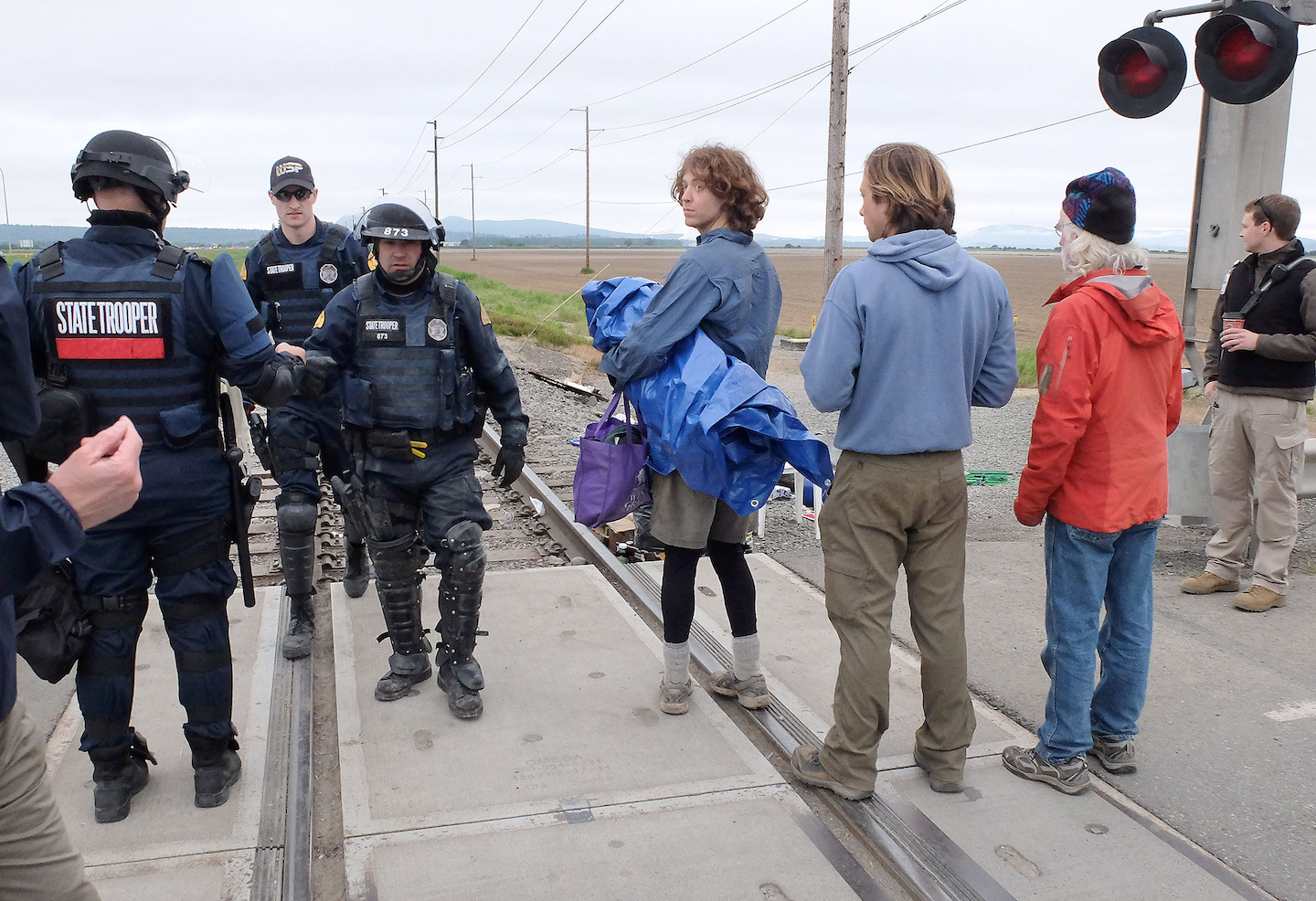 Authorities wrap up clearing the railroad tracks of protesters Sunday, May 15, 2016, west of Burlington, Wash. Dozens of climate activists were arrested Sunday morning, after a two-day shutdown. About 150 people spent the night in tents and sleeping bags on the tracks near two refineries in northwest Washington, according to BNSF Railway spokesman Gus Melonas. (Scott Terrell/Skagit Valley Herald via AP)

She also spoke about the contrast between arresting people for protesting about saving the planet and the lack of government action against the fossil fuel industry.

The rail line has been closed since Friday because of the protests, and trains will begin running again Sunday afternoon after a cleanup and safety sweep of the tracks, he said.

Protesters in kayaks, canoes, on bikes and on foot also took place in demonstrations near Anacortes, about 70 miles north of Seattle, to demand action on climate and an equitable transition away from fossil fuels such as oil and coal.

Hundreds marched to the refineries Saturday and a smaller group blocked the railroad, all demanding energy policy changes. The railroad knew about the protest in advance and rerouted rail traffic to avoid the area.

The railroad spur provides rail transportation for the nearby Shell and Tesoro oil refineries, as well as animal feed and other products.

The protests are part of a series of global actions calling on people to "break free" from dependence on fossil fuels. Similar demonstrations were held around the country during the weekend.

In upstate New York, climate activists gathered Saturday at a crude-oil shipment hub on the Hudson River in an action targeting crude-by-rail trains and oil barges at the Port of Albany. A group of activists sat on tracks used by crude oil trains headed to the port. Albany is a key hub for crude-by-rail shipments from North Dakota's Bakken Shale region.

In Washington state, organizers targeted two refineries that are among the top sources of greenhouse gas emissions in the state. Tesoro has started shipping Bakken crude oil to its refinery, and Shell is proposing an expansion project that would similarly bring in Bakken crude oil by train.

Officials with Shell and Tesoro said in earlier statements that they respect the right of people to demonstrate peacefully, and that safety is their highest priority.

Bud Ullman, 67, who lives on Guemes Island, participated in the march, which he described as good-spirited, peaceful.

"The scientists are right. We have to get away from our dependence on fossil fuels, and it has to be done in a way that takes into serious consideration the impact on workers, families and communities," he said.

Many of the nearly 40 groups involved in organizing the event also participated in large on-water kayak protests against Shell's Arctic oil drilling rig when it parked last year at a Seattle port.