Since growing in popularity over the last few years, e-cigarettes have been the subject of many emerging concerns — from chemicals to addiction. But are they worse than traditional smokes? 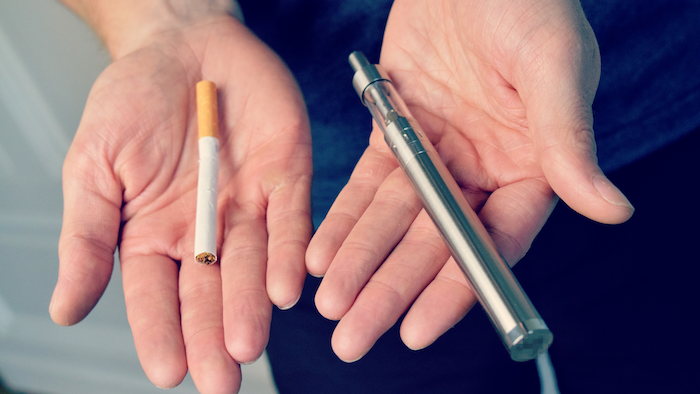 Since growing in popularity over the last few years, e-cigarettes have been the subject of many emerging concerns.

Last year, one study showed that some e-cigarettes could release more formaldehyde than traditional smokes. Another group of researchers found diacetyl, a flavoring chemical that has been linked to severe respiratory disease, in 75 percent of e-cigarettes studied.

There have also been concerns that e-cigs are just as addictive as regular cigarettes or that they could be a gateway to smoking.

Because of these issues several cities have banned the use of e-cigarettes where other smoking is prohibited. It’s also made many American public health officials, including the Centers for Disease Control and Prevention, reluctant to recommend their use.

But a British medical group is attempting to sway public opinion the other way. In a report released this week the Royal College of Physicians pointed out that despite the chemical concerns raised by research, the benefits of using e-cigarettes still outweigh the harm of traditional smoking.

“This is the first genuinely new way of helping people stop smoking that has come along in decades…[E-cigarettes] have the potential to help half or more of all smokers get off cigarettes,” John Britton, director of the U.K. Center for Tobacco and Alcohol Studies at the University of Nottingham, who led the committee that produced the report, said in a New York Times report.

Smoking is the largest contributor to preventable deaths in the U.S., with more than 480,000 people dying from smoking-related diseases each year.

After analyzing 10 years of research, the British physicians concluded that e-cigarettes are only 5 percent as dangerous as regular smokes, and urged doctors to advise patients to make the switch.

According to the Times, the opinion of the Royal College of Physicians is highly respected in England, and they often set the tone for medical practices in the country.

The CDC, meanwhile, said they wouldn’t comment on any report that’s not their own and maintained their established stance on e-cigarettes: “There is currently no conclusive scientific evidence supporting the use of e-cigarettes as a safe and effective cessation tool at the population level. The science thus far indicates most e-cigarette users continue to smoke conventional cigarettes.”