To date 18.9 billion pounds (8.6 billion kilograms) of glyphosate have been used globally. 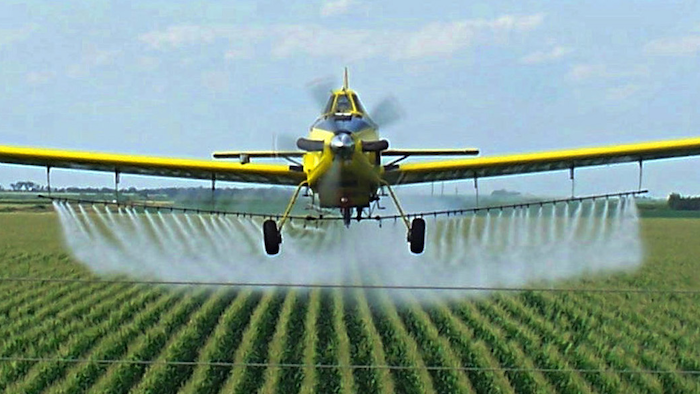 Monsanto's signature herbicide glyphosate, first marketed as "Roundup," is now the most widely and heavily applied weed-killer in the history of chemical agriculture in both the U.S. and globally, according to a landmark report published today.

The paper, published Feb. 2, 2016 in the peer-reviewed journal Environmental Sciences Europe, reports that to date 18.9 billion pounds (8.6 billion kilograms) of glyphosate have been used globally. Glyphosate use has risen almost 15-fold since so-called "Roundup Ready" genetically engineered crops were introduced in 1996.

In 2014, enough glyphosate was sprayed to leave more than three-quarters of a pound of the active ingredient on every harvested acre of cropland in the U.S., and remarkably, almost a half pound per acre on all cropland worldwide (0.53 kilogram/hectare).

The paper by Charles Benbrook, Ph.D., titled "Trends in glyphosate herbicide use in the United States and Globally," is available free online at Environmental Sciences Europe.

"The dramatic and rapid growth in overall use of glyphosate will likely contribute to a host of adverse environmental and public health consequences," Dr. Benbrook wrote.

Last year, 17 of the world's top cancer researchers voted unanimously to elevate glyphosate's cancer profile on behalf of the World Health Organization. After the panel of experts reviewed all of the publicly available research, the WHO's International Agency for Research on Cancer (IARC) classified the weed-killer as "probably carcinogenic to humans." Following WHO's action, the state of California is currently in the process of listing glyphosate as a known human carcinogen under its Proposition 65 law.

As Benbrook's paper notes, other recent studies have found connections between glyphosate exposure and a number of other serious health effects, including liver and kidney damage and non-Hodgkin lymphoma, among others.

Remarkably, 74 percent of all glyphosate sprayed on crops since the mid-1970s was applied in just the last 10 years, as cultivation of genetically engineered corn and soybean crops exploded on both U.S. and global croplands.

Glyphosate was first sold commercially in 1974, but its use by farmers was limited at first because the active ingredient killed both weeds and crops. The subsequent development and approval of genetically engineered (GE), herbicide-tolerant (HT) crops dramatically changed how farmers could apply it. Starting in 1996, Monsanto and other seed companies began marketing GE-HT versions of three major crops -- cotton, corn, and soybeans -making it possible for farmers to apply glyphosate for months after crops started growing.

"My hope is that this paper will stimulate more research on glyphosate use and human and environmental exposure patterns to increase the chance that scientists will quickly detect any problems that might be triggered, or made worse, by glyphosate exposure," Benbrook added.

"This report makes it clear that the use of glyphosate, combined with the dominance of genetically engineered crops, has produced a looming public health threat both in the U.S. and around the world," said Mary Ellen Kustin, senior policy analyst at EWG. "Farmers have sprayed billions of pounds of a chemical now considered a probable human carcinogen over the past decade. Growers spray glyphosate several times a year on the majority of U.S. cropland. The sheer volume of use of this toxic weed-killer is a clear indication that this chemical dependency is a case of farming gone wrong."

This is the second paper by Benbrook published in Environmental Sciences Europe. The first, "Impacts of genetically engineered crops on pesticide use in the U.S. -- the first sixteen years," was published in September 2012 and remains the most heavily accessed paper in the 25-year history of the journal, with more than 230,000 views.