The world's biggest oil companies are slashing jobs and backing off major investments as the price of crude falls to new lows — and there may be more pain to come. 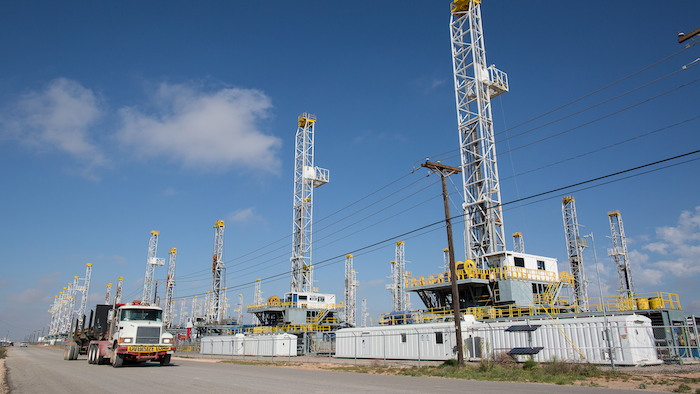 LONDON (AP) — The world's biggest oil companies are slashing jobs and backing off major investments as the price of crude falls to new lows — and there may be more pain to come.

Companies like BP, which said Tuesday it is cutting 4,000 jobs, are slimming down to cope with the slump in oil, whose price has plummeted to its lowest level in 12 years and is not expected to recover significantly for months, possibly years. California-based Chevron said last fall that it would eliminate 7,000 jobs, while rival Shell announced 6,500 layoffs.

And it's not even the big producers that will be affected most, but the numerous companies that do business with them, such as drilling contractors and equipment suppliers.

While plummeting oil prices have been great news for motorists, airlines and other businesses that rely heavily on fuel, some 95,000 jobs were lost in the energy sector by U.S.-based companies in 2015, according to the consulting firm Challenger, Gray & Christmas. That was up from 14,000 the year before.

Energy companies expanded as oil topped $100 a barrel in 2008 and stayed there during the early part of this decade, but prices have plunged over the past two years because of high supply and weakening demand

The start of a new year hasn't helped matters, with Brent crude, the benchmark for internationally produced oil, slipping below $31 a barrel on Tuesday, a drop of about 20 percent drop since Jan. 1 and the lowest since 2004.

With some analysts forecasting a drop near $10 a barrel, companies are bracing for more trouble.

"Calling the bottom in a market is always a dangerous practice, akin to catching a falling knife," said Michael Hewson, chief market analyst at CMC Markets. "But when the clamor for lower prices becomes a stampede, warning signs and alarm bells tend to start going off, which suggests that a more prudent approach might be advisable."

The uncertainty is making companies think twice before sinking money into new oil projects. That's a problem, since even the most modest project requires vast commitments of resources over a number of years. If the industry doesn't invest in production, that could create supply problems down the line.

On the North Sea, "there is a standstill in the new project launches which may create a hole in the pipeline of projects next year," said Florent Maisonneuve, managing director and co-head of Oil & Gas at AlixPartners in Paris.

Weakening demand in China, the world's second-largest energy consumer, has helped drive the price down. So has a stronger U.S. dollar, which makes oil more expensive for buyers outside the United States.

Members of OPEC, meanwhile, are refusing to cut back on production for fear of losing their share of the market to non-members like the U.S. and Russia. And OPEC states Iran and Iraq, whose industries have been off line for years because of conflict and sanctions, are looking to start pumping more.

All this means prices are unlikely to bounce back soon.

"The companies are doing the best they can to survive as long as they can," said Spencer Welch, an oil expert at analysis group IHS. "We don't see a quick out."

In the United States, the Energy Department said Tuesday that it expects U.S. crude to average $38.54 a barrel in 2016. Fadel Gheit, an analyst at Oppenheimer & Co., said as many as half of the independent drilling companies working in U.S. shale fields could go bankrupt before prices stabilize.

In countries where oil production is state-owned and the main source of economic wealth, the drop in price is particularly painful. Russia, Venezuela and Gulf states like Saudi Arabia are seeing state coffers empty at an alarming pace, forcing them to make cost cuts that affect the wider population.

Russia has based its budget this year on an average oil price of $50 per barrel, and the government has indicated it is prepared to make spending cuts across the board to deal with the slump. The economy already is sliding into recession.

Russia also warned last month that it will probably deplete a rainy day fund, now worth roughly $52 billion, by the end of 2016 to make up for losses caused by the drop in oil prices.

Among the Gulf states, Saudi Arabia, Bahrain and Oman are reducing subsidies on gasoline. In Bahrain, gas prices at the pump rose by as much as 60 percent on Tuesday.

The financial outlook is so uncertain that Saudi Arabia is considering selling a part of its state-owned oil company, the world's largest producer, in a public offering.

Welch said that with the oil market oversupplied, it may not be until the third quarter of this year before things come into balance.

BP said Tuesday it made its job cuts in light of "toughening conditions" in the industry. The cuts will include some 600 jobs in the North Sea.