The 7th row of the periodic table is complete now that four new elements have been added. 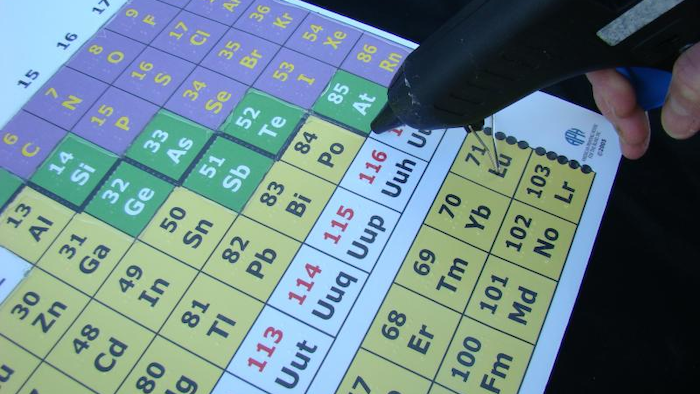 The 7th row of the periodic table is complete now that four new elements have been added.

The superheavy elements with atomic numbers 113, 115, 117 and 118 have yet to receive permanent names and for now are known by their working names including ununseptium and ununtrium.

According to Wired, “All of the new elements are man-made and were discovered by slamming lighter nuclei into each other and then tracking the decay of the radioactive elements. Their addition to the periodic table marks a significant scientific breakthrough, though the elements do not exist for long before they breakdown and become different elements.”

NPR notes that element 113, for example, only exists for less than a thousandth of a second.

Scientists in Japan, Russia and the U.S. discovered the elements and they were confirmed by the International Union of Pure and Applied Chemistry. They are the first elements added to the table since 2011. According to IUPAC, the elements were carefully studied before being verified.

"The chemistry community is eager to see its most cherished table finally being completed down to the seventh row," said Professor Jan Reedijk, from IUPAC.

The elements will be on public display for five months, but it will be up to IUPAC to give them each a formal name, which could come from a mineral, a place, mythology or a scientist.

While the new additions give the table a sense of a finished puzzle, scientists continue to hunt for new elements. Some laboratories have already begun research to create elements 119 and above -- so far, without success. But the hope is that researchers could create a new element that’s stable with far-reaching practical applications.