He described a talented leader Nissan tried to retain with money. 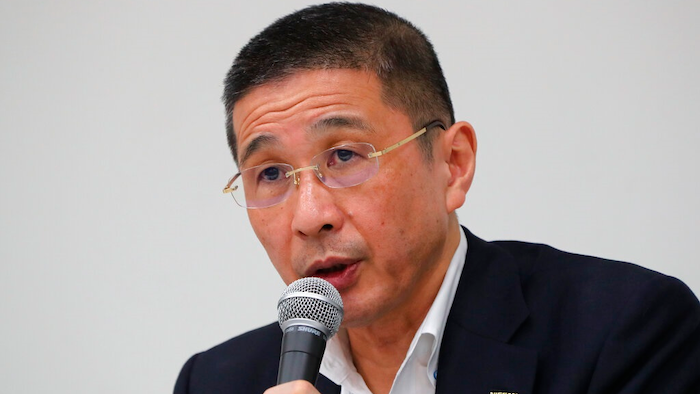 In this Sept. 9, 2019, file photo, then Nissan Chief Executive Hiroto Saikawa speaks during a press conference in the automaker's headquarters in Yokohama, near Tokyo. Former Nissan Chief Executive Saikawa told a Japanese court Wednesday, Feb. 24, 2021, he believed the compensation for his predecessor Carlos Ghosn was too low “by international standards,” and so he supported Ghosn’s retirement packages to prevent him from leaving.
AP Photo/Koji Sasahara, File

TOKYO (AP) — Former Nissan Chief Executive Hiroto Saikawa told a Japanese court Wednesday he believed the compensation for his predecessor Carlos Ghosn was too low “by international standards,” and so he supported Ghosn’s retirement packages to prevent him from leaving.

“We needed to prepare for Mr. Ghosn’s eventual retirement to keep him motivated and to have him continue to work for Nissan,” he said in answer to a prosecutor’s questioning.

Saikawa worked closely with Ghosn and succeeded Ghosn as CEO in 2017. After Ghosn was arrested in November 2018, he denounced Ghosn.

Saikawa resigned in September 2019 after questions over his own compensation surfaced. He denied wrongdoing and was not charged.

He struck a sympathetic tone Tuesday, telling the court he signed several draft documents on remuneration packages for Ghosn, including retirement pay, consultant fees and a non-compete agreement to prevent him from moving to a competitor.

Kelly, who was overseeing the compensation plans, is asserting his innocence in the trial that began last year. An American, he has been charged with financial misconduct in failing to fully disclose Ghosn’s future compensation. No one at Nissan apart from Ghosn and Kelly has been charged.

Ghosn led Nissan for two decades, salvaging the Japanese automaker from the brink of collapse. He is accused of under-reporting his income by about 1 billion yen ($10 million) a year over several years and of breach of trust.

In the cross-examination by Kelly's defense lawyer Yoichi Kitamura, Saikawa said the several documents he signed were not about Ghosn's unpaid compensation but for services after Ghosn's retirement. Saikawa stressed the documents were drafts with blank dates to be inserted later, and they would have become official contracts only when Ghosn left Nissan.

When asked why he signed the documents, Saikawa said he trusted Kelly.

“He is an expert and a professional, and he was coming up with the proposals with an understanding of the overall process. If he was saying it, there could be no mistake,” Saikawa told the court.

Witnesses and prosecutors have said Ghosn took a pay cut to about half of what he’d been getting after the law started requiring such disclosures to securities authorities in 2010.

Ghosn also says he is innocent. He fled while out on bail in late 2019, and is now in Lebanon, which has no extradition treaty with Japan.

Separately, Japan is seeking the extradition of Michael Taylor and his son Peter Taylor, accused of smuggling Ghosn out of Japan. They are now being held in a suburban Boston jail. Earlier this month, a U.S. judge cleared the way for the two to be handed over to Japan.

Kelly's trial, before a panel of three judges, is expected to last for several more months. More than 99% of Japanese criminal trials result in convictions.

Nissan has been charged as a company. It has acknowledged guilt but is still standing trial, as is standard in Japan.