A former Green Beret and his son are accused of helping smuggle the executive out of Japan. 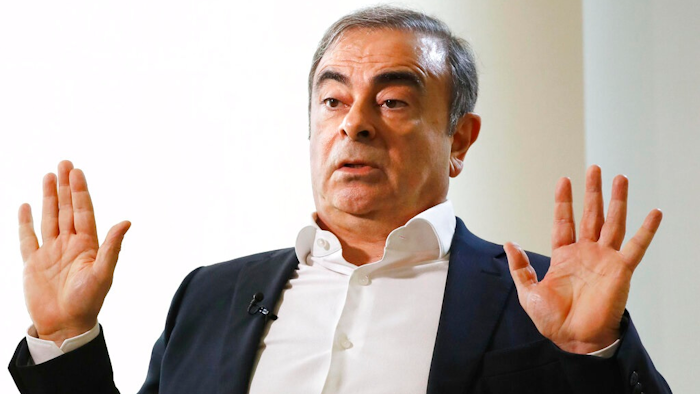 WASHINGTON (AP) — A former Green Beret and his son were arrested Wednesday in Massachusetts on charges they smuggled Nissan Motor Co. Chairman Carlos Ghosn out of Japan in a box while he awaited trial there on financial misconduct charges.

Michael Taylor, a 59-year-old former Green Beret and private security specialist, and Peter Taylor, 27, are wanted by Japan on charges they helped Ghosn escape the country in December after he was released on bail.

The Taylors were arrested by the U.S. Marshals Service in Harvard. They appeared before a federal judge from jail via video conference, wearing orange jumpsuits and tan face coverings because of the coronavirus pandemic.

An attorney for the Taylors said they plan to challenge Japan's extradition request “on several legal and factual grounds.”

“Michael Taylor is a distinguished veteran and patriot, and both he and his son deserve a full and fair hearing regarding these issues, both before the courts and the executive branch,” Paul V. Kelly said in an email.

The tale of the daring escape began on Dec. 28, 2019, when Peter Taylor arrived in Japan and met with Ghosn at the Grand Hyatt Tokyo for about an hour, authorities said.

Just before 10 a.m. the next day, Michael Taylor flew into Osaka, Japan, on a chartered Bombardier Global Express jet from Dubai with another man, George-Antoine Zayek, carrying two large black boxes with them.

The elder Taylor was experienced with sticky situations. Over the years, he has been hired by parents to rescue abducted children, gone undercover for the FBI in a sting on a Massachusetts drug gang and worked as a contractor for the U.S. military in Iraq and Afghanistan. The last assignment had landed him in a Utah jail for 14 months, caught in a federal contract fraud case that upended Taylor’s family and finances before he agreed to plead guilty to two charges.

It's not clear yet how Ghosn hooked up with Taylor.

At their arrival, Taylor and Zayek, his Lebanese-born colleague, told airport employees they were musicians carrying audio equipment. Meanwhile, Ghosn, who was out of custody on a hefty bail, headed to the Grand Hyatt in Tokyo and met up with Peter Taylor in his hotel room, authorities said.

The elder Taylor and Zayek joined after a brief stop to rent a separate room near the airport. And soon after their arrival, the group left the Grand Hyatt and split up.

Peter Taylor headed to the airport to hop on a flight to China, court documents said. The others hopped on a bullet train and arrived at the Shin-Osaka train station about four hours later, authorities said.

They hailed a taxi and went back to the towering luxury hotel where Taylor and Zayek had booked a room earlier in the day.

They all went in; only two would be seen walking out.

Authorities say Ghosn was inside one of the big black boxes, lugged by the two men to Japan’s Kansai International Airport, authorities said. The boxes passed through a security checkpoint without being checked and were loaded onto a private jet headed for Turkey, the documents say.

At 11:10 p.m., the chartered Bombardier, its windows fitted with pleated shades, lifted off with Ghosn stowed aboard. The flight went first to Turkey, then to Lebanon, where Ghosn has citizenship but which has no extradition treaty with Japan.

Two days later, Ghosn announced publicly he was in Lebanon.

He said he fled because he could not expect a fair trial, was subjected to unfair conditions in detention and was barred from meeting his wife under his bail conditions.

Ghosn maintains he is innocent of allegations he underreported his future income and committed a breach of trust by diverting Nissan money for his personal gain. He says that the compensation was never decided on or received, and that the Nissan payments were for legitimate business purposes.

A spokesman for Ghosn's legal team declined to comment on Wednesday's developments.

Peter Taylor had traveled to Japan at least three times since July 2019 and met with Ghosn at least seven times during those visits, according to court records. Japanese officials had also issued a provisional warrant for Zayek’s arrest.

Lebanese authorities said Ghosn entered the country legally on a French passport, though he had been required to surrender all three of his passports to his lawyers under terms of his bail. He also has Brazilian and Lebanese citizenship.

The security business that Michael Taylor and a partner set up decades ago was initially focused on private investigations, but their caseload grew through corporate work and unofficial referrals from the State Department and FBI, including parents whose children had been taken overseas by former spouses.

In 2012, federal prosecutors alleged Taylor had won a U.S. military contract to train Afghan soldiers by using secret information passed along from an American officer. When Taylor learned the contract was being investigated, he asked an FBI agent and friend to intervene, prosecutors charged.

The government seized $5 million from the bank account of Taylor’s company. Facing 50 charges, he spent 14 months in jail before agreeing to plead guilty to two counts. The government agreed to return $2 million to the company as well as confiscated vehicles.

Elon Musk said he'd pull Tesla out of California, and the impacts of that threat are still playing out.
May 19th, 2020
Follow Us
Most Recent