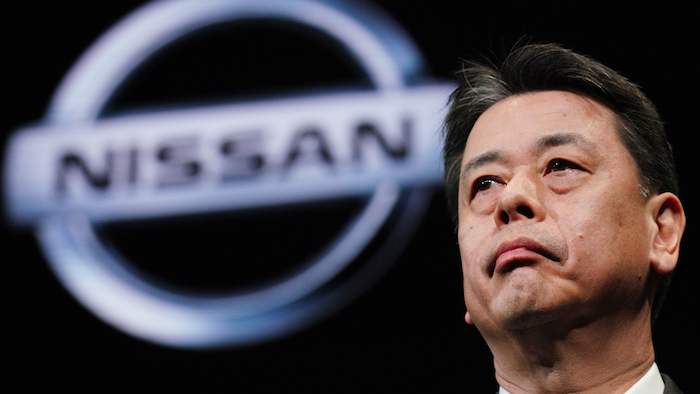 In this Dec. 2, 2019, file photo, Nissan Chief Executive Makoto Uchida speaks during a press conference in the automaker's headquarters in Yokohama, near Tokyo.
Associated Press

They got up, one by one, at an extraordinary shareholders’ meeting, demanding that Nissan Motor Co. quickly fix diving car sales, work harder to repair its battered brand and have executives give up their pay.

Ghosn, a superstar executive who had led Nissan for two decades, was arrested in November 2018. He was awaiting trial on financial misconduct charges in Tokyo when he skipped bail late last year and escaped to Lebanon.

New Chief Executive Makoto Uchida apologized to shareholders for having “allowed the misconduct” of Ghosn and promised better governance, transparency and financial results, but pleaded for more time.

He said a turnaround plan will be announced in May, which one shareholder immediately criticized as too late.

“We are in a disastrous situation,” Uchida said of the Ghosn scandal. “It was shocking, and I denounce it.”

Uchida is among the four directors whose election was up for vote at the meeting held at a conference center in Yokohama, near Tokyo, where Nissan is headquartered.

Uchida was tapped in December to replace Hiroto Saikawa, who was Ghosn's successor.

Saikawa tendered his resignation last year after allegations surfaced about his own dubious personal income. Saikawa’s resignation becomes final at the end of the shareholders’ meeting.

One shareholder asked if Saikawa was giving up his retirement pay.

Another asked why Jean-Dominique Senard, chairman of French alliance partner Renault SA and Nissan board member, was seen leaving a previous shareholders’ meeting in a Toyota.

Saikawa did not reply. Senard apologized and said it was a mistake that had upset him as well.

Global sales of Nissan vehicles have plunged. Nissan recorded red ink for the quarter through December, the first such quarterly loss in 11 years.

Nissan's prized technology, such as electric vehicles and automated driving, will be featured in planned models, Uchida said.

Also up for approval at the meeting was the appointment of Nissan Chief Operating Officer Ashwanti Gupta, who joined Renault in India in 2006, and has since worked for the alliance, which also includes smaller Japanese automaker Mitsubishi Motors Corp.

The appointment of Nissan’s production expert Hideyuki Sakamoto and Pierre Fleuriot, a risk management specialist and independent director at Renault, was also up for vote.

Renault owns 44% of Nissan and so the proposals were certain to pass. The appointments were welcomed by clapping at the end of the two-and-a-half hour meeting, and the executives took a bow on stage.

But hanging over the entire meeting was Nissan’s plummeting fortunes, its reputation tarnished over not only the Ghosn scandal but the shaky way it was handled at the company.

One argued no one would want to buy a car from a company that looked as disorganized as Nissan. At one point, several shareholders began shouting at each other.

Another shareholder proposed putting a bounty on Ghosn’s head so he could be brought back from Lebanon to stand trial. Japan and Lebanon do not have an extradition treaty.

Ghosn, who has insisted on his innocence, has said he was targeted with trumped up charges because of what he called a conspiracy at Nissan to block a fuller merger with Renault.

Uchida repeatedly tried to assure shareholders the company was standing up to wrongdoing, leveraging the Renault alliance and working on products to highlight “intelligent mobility.”

“I am confident we can achieve all this,” he said.