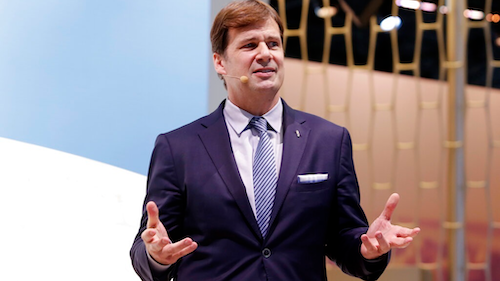 DETROIT (AP) — Ford is shaking up its management after a poor fourth-quarter financial performance and the botched launch of the Explorer SUV.

In addition, product development chief Hau Thai-Tang will take on an expanded role for products, services and customer experiences.

Ford's full-year profit plunged by more than $3.6 billion last year, and it lost $1.7 billion in the fourth quarter.

When earnings were announced on Tuesday, CEO Jim Hackett said the company fell short of expectations for the year, and he blamed the performance largely on the flubbed launch of the new Ford Explorer SUV at its factory in Chicago.

New Explorers came off the assembly line with multiple problems and had to be shipped to a Detroit-area factory for repairs, delaying deliveries to customers and costing the company sales.

Hackett also referred to higher warranty costs during the year, especially for a glitch-prone six-speed automatic transmission in the Ford Focus compact car.

Wall Street was underwhelmed by Friday's announcements. Shares of Ford were down just over 1% in midday trading to $8.16.

The changes come as Ford continues an $11 billion restructuring effort under Hackett, who is under increasing pressure to show results after replacing ousted CEO Mark Fields in May of 2017.

On the conference call Friday, Hackett said he and Farley complement each other well, and he plans to stay to transform the company.

“This is the kind of thing that I love to do,” the former Steelcase office furniture CEO said. “I’m having really a fulfilling assignment here. I’ve told everybody that I’ve fallen in love with the company.”

Hackett's future has been questioned by some analysts, mainly Morgan Stanley's Adam Jonas, who in 2018 wondered how much longer Hackett would be around. Earlier this week Jonas told General Motors executives he was impressed with their presentation to investors in New York, and they should send a videotape of it to Ford. “I'll hand deliver it myself to them if you don't send it to them,” he said.

Although many analysts were disappointed with Ford's 2020 earnings guidance on Tuesday, it probably wouldn't make sense to replace Hackett at this time, said Morningstar analyst David Whiston. Ford said it would make $5.6 billion to $6.6 billion before taxes this year, which could be the same or worse than the $6.4 billion pretax profit in 2019.

“The CEO can't single-handedly control everything that goes on at every company. Ford is too big," Whiston said.

If Hackett was replaced by Farley — who now is the obvious successor — he wouldn't be able to change things enough to turn the company around quickly, Whiston said.

“Even the greatest CEO in the world can’t come in and immediately, in one or two quarters, turn things around,” he said.

Hackett on Friday denied that the Explorer launch or the Focus transmission had anything to do with the retirement of Hinrichs, who has been with the company for 19 years. Hackett called Hinrichs an outstanding operational leader and said he is beloved in the company.

Hinrichs was in charge of automotive during the Explorer launch and was a key executive when the Focus transmission was rolled out. But he also was in charge of a massive but successful switch to an aluminum body on the F-Series pickup truck, the top-selling vehicle in the U.S. and Ford's biggest profit source.

Hackett said Hinrichs, 53, took a major role in fixing problems with the Focus transmission. The flawed Explorer launch, he said, was an issue for the whole company and everyone is accountable for it. Hackett also said Hinrichs was instrumental in Ford's survival through the Great Recession without bankruptcy or a taxpayer-funded bailout. He also started Ford’s operations in China and ran North American operations.

In a regulatory filing, Ford said that Hinrichs would get his regular compensation, plus payments equal to two years of annual salary, which was $1.1 million per year in Ford’s most recent proxy statement. The company also will add three years of age and service to calculate his retirement benefits. Hinrichs’ compensation package was worth $5.8 million for 2018.

Farley, 57, was hired by retired Ford CEO Alan Mulally in 2007 as global head of marketing and sales. He has led the Lincoln brand and operations in South America and Europe. Since April, he has been in charge of new business, technology and strategy as Ford tries to figure out how to capitalize on automation and electric vehicles.

In a statement, Ford said that Farley will lead a drive to make automotive operations stronger and deliver a global pretax profit margin of at least 8%.

“Now it's go time,” Farley said on the conference call. “Execution. Really excited to lead the team to bring Ford's vision to life.”