Contract talks between General Motors and the United Auto Workers union continued Sunday just hours before a midnight deadline for a possible strike. 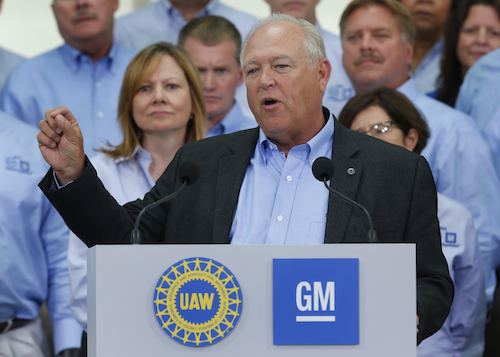 GM spokeswoman Katie McBride said Sunday afternoon that talks were on a fast pace and the company still hoped to get an agreement by midnight.

The union told GM on Saturday that it would terminate its contract at midnight Sunday night, creating the potential for a strike. The UAW made a similar strike threat in discussions with Fiat Chrysler, but negotiators were able to avoid a walkout.

On Thursday, union members at Fiat Chrysler voted to approve a four-year contract that includes pay raises and phases out a two-tier wage system. UAW President Dennis Williams indicated that the union wants better deals from General Motors Co. and Ford Motor Co. because they are more profitable.

GM reported last week that it earned $1.36 billion in the third quarter, including a record $3.3 billion pretax profit in North America on strong sales of trucks and SUVs. The company overcame $1.5 billion in costs from recalls over deadly ignition switches and beat Wall Street profit forecasts by a wide margin.