U.S. auto safety regulators fined Takata Corp. of Japan $70 million for lapses in the way it handled recalls of millions of explosion-prone airbags that are responsible for eight deaths and more than 100 injuries worldwide. 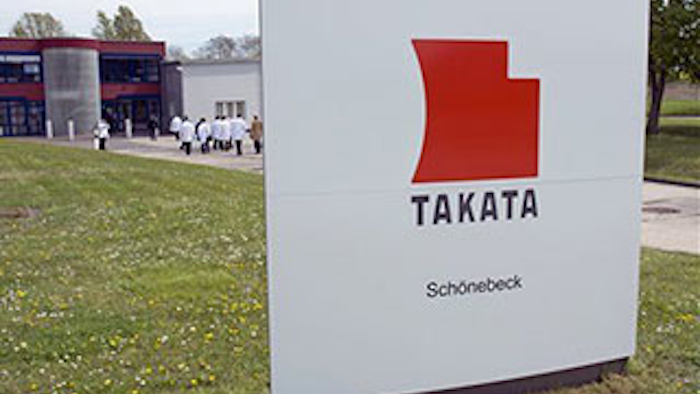 DETROIT (AP) — U.S. auto safety regulators fined Takata Corp. of Japan $70 million for lapses in the way it handled recalls of millions of explosion-prone airbags that are responsible for eight deaths and more than 100 injuries worldwide.

Regulators also ordered Takata to stop making the airbag inflators at the heart of the problem unless the company can prove they are safe.

Under a five-year agreement reached with Takata, the National Highway Traffic Safety Administration has the authority to add up to $130 million to the penalty if the company fails to abide by the terms. In the deal, Takata admitted that it knew the inflators were defective, but failed to recall them in a timely manner.

The penalty would be a record if it grows to $200 million.

Takata's airbag inflators can spew shrapnel into drivers and passengers in a crash. So far, about 23.4 million driver and passenger inflators have been recalled on 19.2 million U.S. vehicles sold by 12 automakers.

Takata's airbags are inflated by an explosion of ammonium nitrate, and investigators so far have found that prolonged exposure to airborne moisture can cause the propellant to burn too fast. That can blow apart a metal canister designed to contain the explosion and shoot out metal fragments. Most of those injured or killed live in high-humidity states that border the Gulf of Mexico.

Still, the company and investigators have yet to discover the exact cause for the rupturing of the inflators. Because of that, the agreement announced Tuesday "lays out a schedule for recalling all Takata ammonium nitrate inflators now on the roads, unless the company can prove they are safe or can show it has determined why its inflators are prone to rupture," NHTSA said in a statement.

"Unless new evidence emerges, the company will have to recall all of its inflators," said Anthony Foxx, head of the Department of Transportation, at a press conference to announce the agreement.

Regulators will also monitor the recalls to ensure replacement inflators are first sent to regions with the greatest chance of inflator problems.

Takata also still faces hundreds of lawsuits and a criminal investigation by the U.S. Department of Justice.

NHTSA continues to investigate whether the company's side airbag inflators also should be recalled.

The order calls for an independent monitor who would make sure Takata abides by the terms. The monitor could be extended to a sixth year.

A total penalty of $200 million would be the largest ever imposed by NHTSA, surpassing the record $105 million penalty levied against Fiat Chrysler earlier this year for failing to report safety issues and follow through on 23 different recalls.

But Sen. Richard Blumenthal, D-Conn., a frequent NHTSA and Takata critic, said the $70 million fine seems like a slap on the wrist and should be larger. "The penalty seems small compared to the consequences of the concealment and disregard" for the law, he said.

Those injured, mainly in driver's seats, have suffered severe neck cuts and facial injuries and have lost eyesight and hearing due to the explosions.

The agency also could announce additional recalls. It has sent letters to seven more automakers warning them that their Takata inflators could be subject to recall.

Shortly after the NHTSA investigation began in June of last year, Takata resisted and said NHTSA didn't have the authority to make it do any recalls. But the company later relented and agreed to the agency's demands.