VW CEO: 'I Am Endlessly Sorry' Brand Is Tarnished 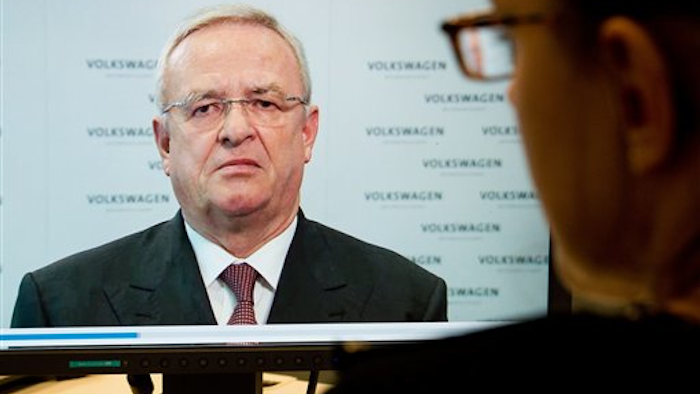 Volkswagen set aside an initial 6.5 billion euros ($7.3 billion) to cover the fallout and "win back the trust" of customers. It also said this year's profit projections will change, and warned that future costs remain undetermined.

CEO Martin Winterkorn apologized for the deception under his leadership and pledged a fast and thorough investigation, but gave no indication that he might resign. Meanwhile, Volkswagen's ordinary shares fell another 20 percent Tuesday, to close at 111.20 euros.

"Millions of people across the world trust our brands, our cars and our technologies," Winterkorn said Tuesday in a video message. "I am endlessly sorry that we have disappointed this trust. I apologize in every way to our customers, to authorities and the whole public for the wrongdoing."

"We are asking, I am asking for your trust on our way forward," he said.

That may be a tall order for people who bought "clean diesel" VWs believing they could get peppy rides but still be environmentally friendly.

"I thought I was doing something good and not something bad," said Zandy Hartig, an actress in Los Angeles who bought a diesel-powered Jetta Sportswagen in 2013.

She plans to get it repaired, but says she'll never buy a Volkswagen again. "It's not a design flaw. It's deliberately manipulating the system, and it's quite evil," Hartig said.

VW has yet to explain who installed the software, under what direction, and why.

"I do not have the answers to all the questions at this point myself, but we are in the process of clearing up the background relentlessly," Winterkorn said.

The EPA said Friday that VW faces potential fines of $37,500 per vehicle, and that anyone found personally responsible is subject to $3,750 per violation.

In theory, the penalties could total $18 billion or more, although companies rarely pay maximum fines in the U.S.

"I don't think this is a life-threatening event, but it's clear it's going to be very expensive," said Christian Stadler, who teaches strategic management at the Warwick Business School.

Volkswagen blamed unrelated issues for more than a year while the EPA and California regulators asked why its cars were running much dirtier on the road. The agencies refused to approve 2016 models without an answer.

Only then did VW acknowledge that software switches its engines to a cleaner mode during official emissions testing. The "defeat device" then switches off again, giving the cars more power while emitting as much as 40 times the legal pollution limit during actual driving, the EPA said.

"Let's be clear about this. Our company was dishonest. With the EPA, and the California Air Resources Board, and with all of you. And in my German words, we have totally screwed up," the head of Volkswagen's U.S. division, Michael Horn, said Monday while unveiling a new Passat model in New York.

Across the sector, investors wondered how far this scandal could grow. Germany's Daimler AG, the maker of Mercedes-Benz cars, was down 7 percent Tuesday, while BMW AG fell 6 percent. France's Renault SA was 7.1 percent lower.

"Brands are all about trust and it takes years and years to develop. But in the space of 24 hours, Volkswagen has gone from one people could trust to one people don't know what to think of," said Nigel Currie, an independent U.K.-based branding consultant.

It also said new vehicles with EU 6 diesel engines currently on sale in the European Union comply with legal requirements and environmental standards.

The company hasn't revealed the results of internal investigations, beyond announcing the much wider impact on Tuesday.

"I hope that the facts will be put on the table as quickly as possible," German Chancellor Angela Merkel said in Berlin.

It may already be too late for people like Peggy Schaeffer, a librarian from Durham, North Carolina, who bought her diesel Jetta Sportwagen in 2010. She had liked Volkswagens, and "until this week, I was completely happy with it," she said.

Now, she's dismayed to know that during a recent cross-country trip, she was "polluting all the way." And if Volkswagen's eventual repair diminishes her car's sportiness or fuel efficiency, she's not sure she wants it.

"I really feel like I've been had. I've been hoodwinked. This is deliberate fraud and deceit," she said.

Winterkorn became CEO in 2007. The software was installed starting with 2009 models. He was looking forward to getting a two-year contract extension, keeping him in charge through 2018, at the company's regular board meeting Friday. Some board members reportedly planned a crisis meeting Wednesday.

Other authorities looking into VW's actions include Germany, where the transport minister announced a commission of inquiry to determine whether VW's diesel vehicles comply with German and European rules; the French government, which demanded that its automakers "ensure that no such actions are taking place in France," the South Korean government and the European Commission. The U.S. Justice Department is involved, and New York's attorney general also announced a multi-state investigation on Tuesday.