Tennessee leaders downplayed the often public wrangling over organized labor's role at Volkswagen's Chattanooga factory on Tuesday, focusing on the company's recent announcement that it would add a new line there to produce a seven-passenger SUV. 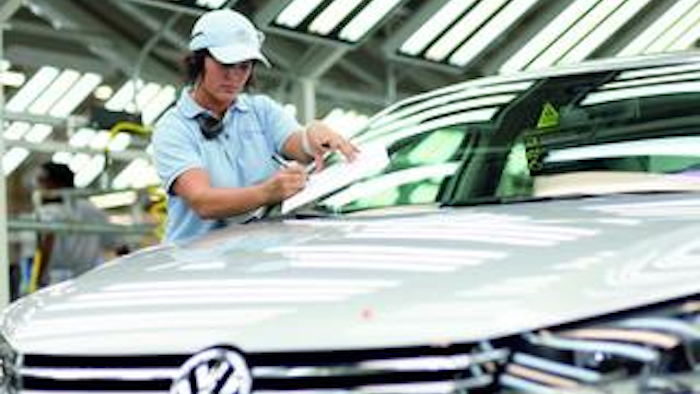 CHATTANOOGA, Tenn. (AP) -- Tennessee leaders downplayed the often public wrangling over organized labor's role at Volkswagen's Chattanooga factory on Tuesday, focusing on the company's recent announcement that it would add a new line there to produce a seven-passenger SUV.

Volkswagen on Monday announced the expansion, which is expected to cost $600 million and add about 2,000 new factory jobs at the Chattanooga site. About 2,400 employees work at the factory now, making the Passat midsize car. The company also plans to add a research and development facility, employing about 200 engineers.

Tennessee Gov. Bill Haslam said the terms of the deal came together about five weeks ago, prior to what UAW leaders have called a "consensus" with Volkswagen.

UAW Secretary-Treasurer Gary Casteel said last week he is confident VW will recognize the union if it signs up a "meaningful portion" of Volkswagen's workforce in Chattanooga, though he did not elaborate on what the threshold would be.

State and local leaders celebrating the expansion at a downtown event Tuesday afternoon said the investment demonstrates Volkswagen's commitment to the region.

"There are cities and communities all over the country that would love to be sitting where Chattanooga is sitting today," Haslam said.

The role of organized labor at the factory caused months of political debate in Tennessee, centered on an employee vote on joining the United Auto Workers Union. Republican federal and state lawmakers had warned that Volkswagen would expand elsewhere if employees approved, and said a $300 million state incentive package couldn't get legislative support if the union was involved. That package has since expired.

The UAW narrowly lost that vote in February, a major setback for the union trying to organize its first foreign-owned plant in the South. Union leaders blamed the GOP politicians' statements for the close result, and filed — but later withdrew — a challenge of the outcome with the National Labor Relations Board.

U.S. Sen. Bob Corker was a frequent critic of the union effort and said during Tuesday's event that the deal couldn't have been completed "unless we all had taken the path that we took."

"There's been a lot of noise, but it just hasn't been part of the equation," Corker said in an interview after the event when asked about the union involvement. "It hasn't been relevant."

Volkswagen representatives have said the company has no formal agreement with UAW. The company has said it would support a German-style works council at the plant that would represent both salaried and blue-collar workers, but said it cannot do so without the involvement of an independent union.

The move aims to save costs as the industry struggles to survive the coronavirus pandemic.
May 27th, 2020

France wants to use the crisis to make France the No. 1 producer of electric vehicles in Europe.
May 26th, 2020

Highway regulators halted trips by EasyMile shuttles after a mysterious braking problem.
May 21st, 2020
Follow Us
Most Recent