When an autonomous mode is engaged, a second system controller activates a second display, which passes a screen over the windshield and lowers a projector from the ceiling. 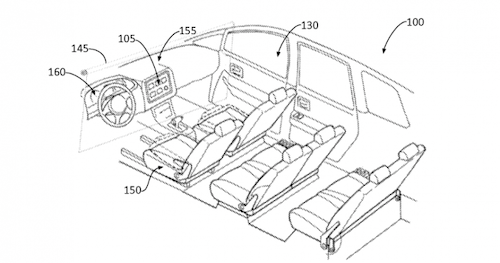 Recently I was wondering whether smartphones and tablets had made screens set into the backs of car seats a thing of the past. Why need to implant a screen when so many consumers bring their own screen with them? Ford is way ahead with a patent for a screen that covers the windshield, suitable for an autonomous car.

It does a lot of other things, too: screens set into the dashboard, instrument cluster, or rearview mirror can be used to display media while the driver is manually controlling the car. When an autonomous mode is engaged, a second system controller activates a second display, which passes a screen over the windshield and lowers a projector from the ceiling.

This could that the company is angling for the day when autonomous cars won’t need human drivers most of the time. These would still be passenger cars, with a driver required for operation, but contribution from that driver would be minimal – and allow time to turn the car into a mobile theater or an office with shifting screens.

Ford representative Alan Hall told Forbes that patents are filed to protect ideas in the normal course of business and “aren’t necessarily an indication of new business or product plans.”

Ford is working on self-driving vehicles at present, but so far the technology exists only for the cars to be fully autonomous in areas with good visibility and clearly defined lanes, such as highways. The adoption of smart technology in “connected” cities could also provide more of a framework in which autonomous cars could navigate between digital waypoints.