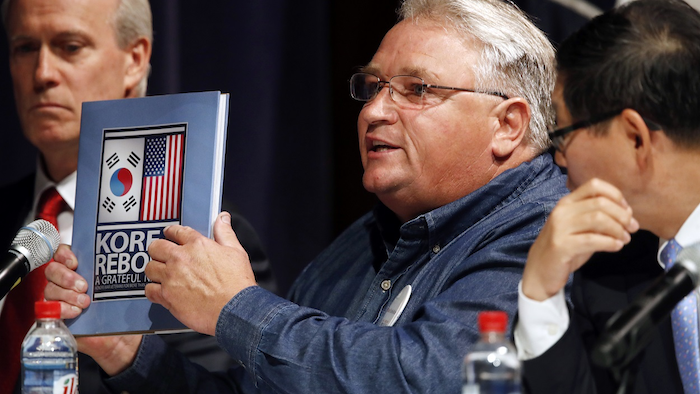 "We fought a war together," says John Hall, a maintenance team member with Hyundai Motor Manufacturing Alabama, center, as he holds up a book about the Korean War, next to Joseph Boyle, senior director of business development and sales at LG Electronics, left, and Yong-Geun Kim, president and CEO of the Korean Automobile Manufacturers Association, during a Commerce Department hearing on investigation into whether auto imports threaten national security, Thursday, July 19, 2018, at the Commerce Department in Washington. Image credit: AP Photo/Jacquelyn Martin

The U.S. Commerce Department sought feedback on President Donald Trump's plans to consider taxing auto imports. It got an earful at an all-day hearing Thursday.

Critics lined up to urge the administration to reject auto tariffs. They argued that the taxes would raise car prices, squeeze automakers by increasing the cost of imported components and invite retaliation from U.S. trading partners — and allies — like the European Union and Canada.

Jennifer Thomas of the Alliance of Auto Manufacturers registered her organization's opposition to levies on car, truck and auto parts imports. She noted that "our view is shared by over 2,200 comments that were filed before this hearing. In fact, we were only able to find three organizations" in favor of pursuing the tariffs.

Trump has ordered Commerce to investigate whether auto imports pose a threat to U.S. national security that would justify tariffs or other trade restrictions. Earlier this year, he used national security as a justification for taxing imported steel and aluminum.

Auto tariffs would escalate global trade tension dramatically: The U.S. last year imported $192 billion in vehicles and $143 billion in auto parts — figures that dwarf last year's $29 billion in steel and $23 billion in aluminum imports. Not to mention the $34 billion in Chinese goods the administration has so far hit with tariffs in yet another dispute over the predatory practices China deploys in a push to challenge U.S. high-tech dominance.

Nearly 98 percent of the cars and trucks that would be hit by the tariffs are imported from U.S. allies: the EU, Canada, Japan, Mexico and South Korea, according to the Peterson Institute for International Economics. David O'Sullivan, the EU's ambassador to Washington, said it was "absurd" to think that imports from staunch allies undermine America's national defense.

"New tariffs or quotas would also reduce competition and consumer choice; increase the cost of used vehicles; and raise the cost of getting vehicles serviced and repaired," said Peter Welch, president of the National Automobile Dealers Association, which commissioned the study.

Welch said the tariffs would push the average new-car payment to $611 a month from $533 a month (over 69 months on average).

John Hall, a maintenance worker at the Hyundai Motor Manufacturing plant in Montgomery, Alabama, testified that auto imports pose no threat to U.S. national security. "In fact, it's just the opposite," he said. Hyundai imports parts that go into its Alabama-built cars.

"New tariffs on automotive imports would have a devastating effect," Hall said. "I am one of thousands of American workers whose livelihoods would be put at risk by a substantial tariff on automotive goods. It would not be possible to change our supply chain overnight, and a 25 percent tariff on parts would raise production costs at our Alabama factory by about 10 percent annually."